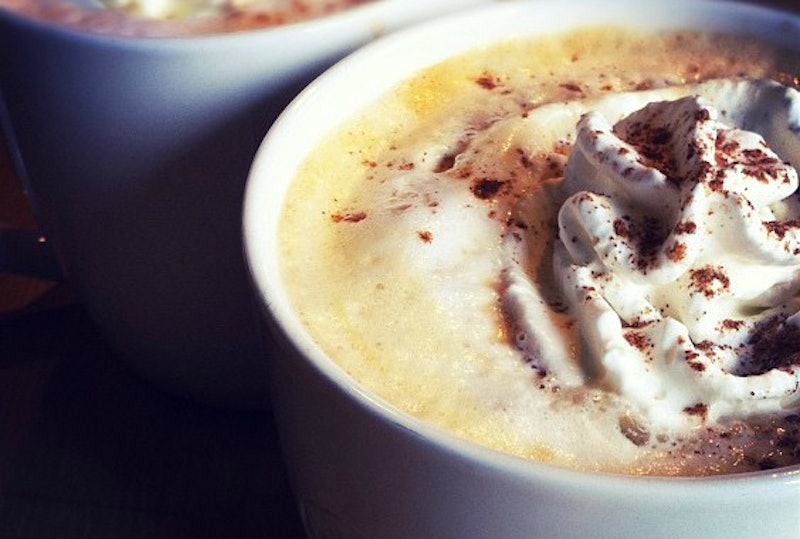 The Starbucks Pumpkin Spice Latte celebrated its official 10th birthday this year — but have you ever been curious about how it came to be in the first place? Seattle Met Magazine recently delved into the origins of the Pumpkin Spice Latte, so now’s your chance to have every burning question you’ve ever had about the PSL finally answered. Ready for this?

The article first appeared at the end of August, roughly around the time the PSL made it back on the menu this year — somehow we missed it the first time round, though, which Seattle Met’s sister magazine, Portland Monthly, noticed. Accordingly, Portland Monthly’s Eat Beat section is drawing attention to it once again; it’s fascinating, too, so I think it’s worth revisiting (or, y’know, visiting for the first time, as the case may be). To get the scoop, Seattle Met’s Allecia Vermillion spoke to Peter Dukes, who had been Starbucks’ product manager in the espresso division in 2003 — and who spearheaded the idea that eventually became the Pumpkin Spice Latte. The whole article is worth a read, so head on over there to check it out; if, however, you’re pressed for time, here’s the Cliff Notes version:

Back in 2003, most of Starbucks’ seasonal drinks were based around the winter holidays. The recent success of the Peppermint Mocha, however, had prompted the company to ask for similar drinks themed for the fall. So Dukes and his team got to work, dreaming up an initial list of 20 different possibilities. Most of the drink ideas featured chocolate, caramel, or both; pumpkin pie, however, also made the list, mostly because no one could think of fall without thinking of Thanksgiving’s most ubiquitous dessert. At that point, only a few coffee shops had pumpkin pie-inspired drinks on their menus — Vermillion cites the Louisiana-based J.L. Hufford Coffee and Tea Company as a pre-Starbucks adopter of the flavor — so although it wasn’t entirely dreamed up by the almighty ‘Bux, it was certainly still “unexplored territory.”

An online survey asking customers what they’d like to taste in a seasonal fall beverage yielded results that weren’t exactly encouraging: The idea of a pumpkin pie latte fell “near the bottom middle.” Dukes kept at it, though, so when the team mocked up four of the original 20 drinks, the pumpkin pie latte came into being in its err form for the very first time. (For the curious, the other three were a chocolate-caramel drink, an orange spice latte, and a “cinnamon streusel latte” that was later released as the Cinnamon Dolce Latte.) Starbucks’ vice president of beverages at the time, Michelle Gass, was skeptical — but Dukes convinced her to let him keep toying with it on the grounds of its relative uniqueness.

The R&D team then spent three months experimenting with both the pumpkin and spice levels in the drink, tasting and refining the recipe as they went. They decided upon using a sauce instead of a syrup to flavor the drink, with the reasoning being that the “extra viscosity helped mimic the proper heft of a mouthful of pie.” The final version featured high levels of both pumpkin and spice (although I think at this point, it’s become pretty clear that by “pumpkin,” we mean “something that resembles, but isn’t quite, pumpkin”). Rejected names for the finished beverage included “fall harvest latte,” which Vermillion notes “at best didn’t quite explain the drink and at worst connoted sipping on a hay bale.” Not going to lie: I laughed out loud at that image. Literally.

The Pumpkin Spice Latte was test-marketed in Vancouver and Washington, DC in the fall of 2003 — and it was huge hit. A year later in 2004, it hit stores all over the country, and… well, you know the rest. Since then, Starbucks customers have ordered over 200 million Pumpkin Spice Lattes, as well as kicked off a nationwide trend towards pumpkin pie-flavored seasonal foods. Love it or hate it, it looks like the PSL is here to stay.

But hey, even if you’re not a huge ‘Bux fan, you can still switch things up with these stupidly tasty Pumpkin Spice Latte hacks. Go ahead. Because they’re delicious.

Images: Jeff Hester/Flickr; When Do It Turn Back Into a Pumpkin, Alien Stardust/Tumblr; Giphy; MRWGifs