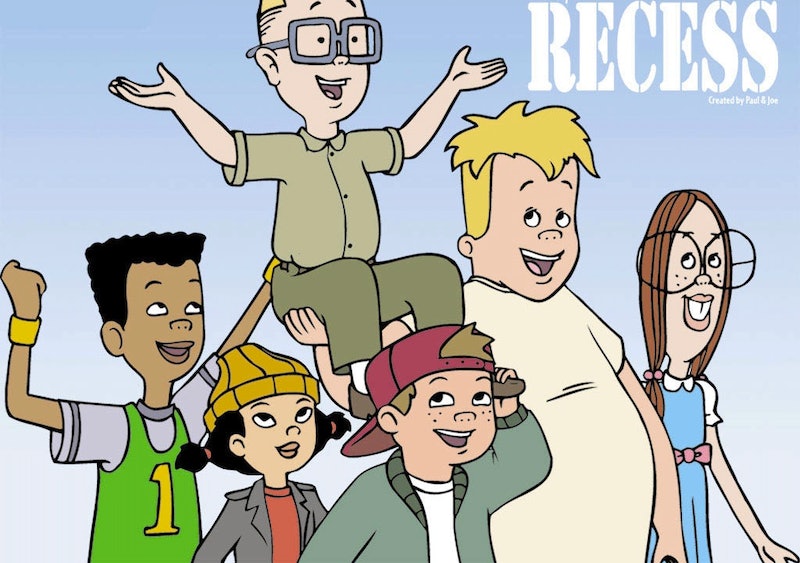 If you are like me — or like most people — you may have been shocked and gutted this week by the revelation that the last block of Saturday morning cartoons has ended, meaning that future generations of children won't have anything to watch if they have the distinct misfortune of waking up early on a Saturday. Remember when the weekend was all about grabbing a bowl of sugary cereal and planting yourself on the couch until at least noon, marathoning cartoons until you were brain dead? Well, those days are over. And, as a child of the '90s, I have to express my outrage. Especially since the cartoons of my day were way better than the ones that were on now.

There were so many different cartoon blocks on so many different channels that it's almost impossible to count them and some of them were just plain better than the others. However, whether they were reruns carried over from the '60s to '80s or incredibly short lived, there were some '90s Saturday morning cartoons that are forever in my heart.

In fact, here is my definitive ranking of 56 of the best '90s Saturday Morning cartoons. You're welcome.

Who knew Chip and Dale could be so... cool?

In theory, this sounds like a great idea for a time traveling cartoon. In practice, it ended too soon.

How has Waynehead not been released on DVD or VHS yet? Come on, Damon Wayans, we need it now!

53. The New Adventures of He-Man

In the modern day, He-Man would wrap that hair up in a man bun to rival the beauty of that of Harry Styles.

I consider Detention to be the spiritual cousin of Recess. Too bad it didn't last as long.

Who knew that Taz, the Tasmanian Devil from Looney Tunes, had his own family and crazy neighbors back on that island? Way to give everyone's favorite tornado some depth.

Before Johnny Depp and Captain Jack Sparrow, there was Pirates of Dark Water.

Warning: Diving into a pile of money may cause you grievous injury. Scrooge McDuck just makes it look easy.

It was an admirable attempt by Looney Tunes to stay relevant.

The Little Mermaid was surprisingly one of Disney's better film-to-TV series adaptations. Although it did make you wonder why Ariel was willing to give all that undersea life up for some guy she'd never spoken to before.

Can we get a petition to put this back on the air?

44. The Spooktacular New Adventures of Casper

Between the Ghostly Trio, the witty one-liners and the pop culture references, Casper was one of the best cartoons out there.

If you didn't love Darkwing Duck, you're wrong.

The Addams Family is a family that was made to be animated. Especially Cousin Itt. And Thing.

You have to give The Smurfs their proper due for being a cartoon about little blue, predominantly male people. A LONG-RUNNING cartoon at that.

Aaahh!!! Real Monsters was in the scare game before Monsters, Inc made it cool.

To be fair, at that age, I would have watched anything that had Sonic the Hedgehog in it.

The Mask was admittedly a better movie than it was a cartoon, but that didn't stop me from loving it.

I dare you to try and get this theme song out of your head after you listen to it. I double dare you.

Kablam! was an insanely good and insanely underrated TV series. Although it did get a spin-off in the form of Action League Now!

Did I get up at 5AM to watch twelve little girls in two straight lines? Why yes, yes I did.

33. The Fantastic Four: The Animated Series

The Fantastic Four deserves its props for being a fairly accurate representation of the comic book's storylines. It was like watching the movie to avoid reading the book.

Batman and Superman in the same series at the same time? Color me there.

Ren and Stimpy was a gross-out show of epic proportions that you probably wouldn't believe actually made it on television back then. But it also gave us the song "Happy Happy Joy Joy", so there.

Aladdin was an even better TV adaptation than The Little Mermaid. On top of that, it actually explored Aladdin and Jasmine's post-movie relationship because cute.

I like my daily dose of heavy-handed environmentalist themes with a side of big blue super heros, thank you.

Rocko's Modern Life was like Ren and Stimpy but better. How was it better? It taught me how to spell recycle, conserve, and pollute. And that I can't fight City Hall.

26. The Real Adventures of Jonny Quest

It's about Batman, which made it a requirement to rank it on the higher side, but it wasn't the best series about Batman. That's further down.

Another cartoon with another addictive theme song, but what can I say? I'm a sucker for kid versions of my favorite cartoon characters.

Spoiler alert: We never actually find out how they use the bathroom.

Beetlejuice took a creepy movie dynamic and turned it into a silly, hilarious, kid-friendly dynamic. Plus, we all know Lydia was calling the shots in that relationship on the cartoon.

I consider this a prequel to The Goofy Movie, which was basically the best movie ever.

Anyone who doesn't think this cartoon was the best X-Men cartoon before X-Men: Evolution came out is a liar.

A Pup Named Scooby Doo had an actual character named Red Herring, teaching children about an awesome literary device without them even realizing it.

Batman Beyond might have been on the darker side of children's programming, but what were you expecting from a Batman cartoon? That didn't stop it from being AMAZING.

The Weekenders was one of the most funny and profound shows on television, ok?

I know, I know. The Magic School Bus should probably have ranked higher than this. But, what can I say? I preferred the books.

Patti Mayonnaise is in jail on Orange is the New Black now. I guess things with Doug didn't work out?

Digimon was more than just a knock-off version of Pokémon, no matter what your angry, Pokémon-card hoarding friends on the playground said.

This was the cutest ever. The end.

No reflection on the cartoons of the '90s would be complete without Pokémon. I mean, it's still on.

I have never enjoyed a Garfield cartoon the way I enjoyed Garfield and Friends. Plus, the theme song is really catchy.

Pepper Ann taught us all how to be too cool for seventh grade.

Tiny Toons was Looney Tunes for a younger generation and somehow it worked. In fact, it became it's own unique creature. And their Christmas special made me cry.

6. Alvin and the Chipmunks

There is a little Helga Pataki in all of us. Doesn't that terrify you?

Rugrats still feels very close to our hearts because it seems like just yesterday that the last of the spin-offs and bonus movies ended. If only we were all smart enough to carry a screwdriver in our diapers when we were 1 years old.

Watching Animanics over again as an adult is like rewatching a Disney movie: filled with bonus, adult jokes that went right over your head.

Everyone else can just go home. Recess was the best of the best.