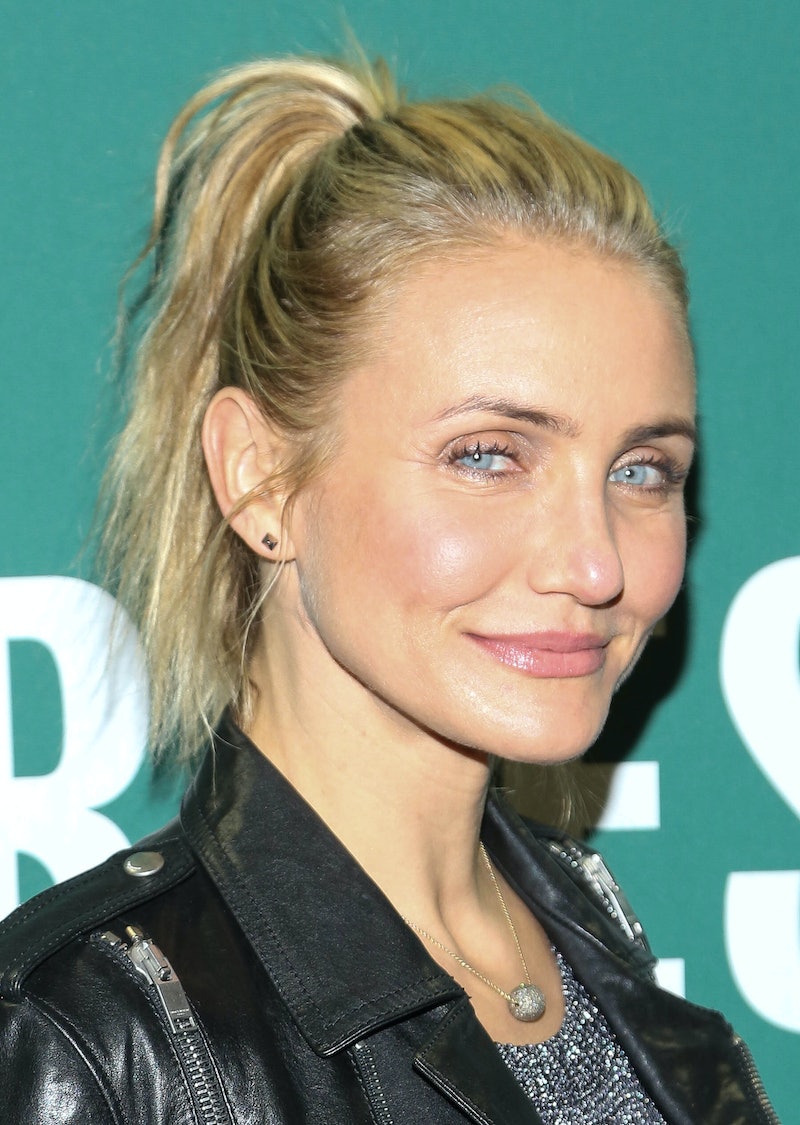 Just after I recovered from the shock of George Clooney getting married, now there are rumors of the eternally independent Cameron Diaz being engaged to Benji Madden. What set these rumors into gear? Diaz was spotted wearing what Hello! Magazine calls a "diamond-encrusted ring set" on her ring finger at the Hollywood Costume Luncheon on Wednesday. So not even a verified engagement ring, but a stack of rings that happen to be placed on that finger? Not exactly a smoking gun there. Then it was pointed out that she wore same ring set again when she went out to dinner with Madden that night. I don't know about you, but I have never been one to make jewelry changes in between meals myself.

Diaz wearing this ring is not what I would consider to be evidence of an engaged, but reports continue to emphasize things like the actress showing off the ring because she brushed hair away from her face and smiled a lot for the cameras. I was doing that at the bar last weekend, did anyone speculate about me being engaged? Nope. Don't get me wrong, I would love to see Diaz engaged if that's what she really wants, but I will believe it when I see it. (Well, when she makes an official statement of it, rather.) Although it's every woman's prerogative to change her mind, the actress has been pretty vocal about her lack of interest in marriage over the years. Additionally, as far as we can tell she has only been seriously dating Madden since May 2014. That puts them at a whopping five months of couple-y cuteness. The pair has not even officially confirmed their romance.

Diaz has been in longer serious relationships in the past that did not even get close to the altar, so don't take this possible engagement sign too seriously. Oh, you don't remember? Let's take a walk down memory lane.

The actress met the infamous Yankee at a Super Bowl party in 2010. They fed each other popcorn at the game and all of a sudden they were a thing. They kept the relationship under wraps for the most part until after the breakup when there were rumors that Rodriguez cheated on Diaz with prostitutes.

Diaz and model Paul Sculfor were seen out and about for a year with heavy PDA action. There were even reports that they too were going to tie the knot in 2009, but then they split up due to hectic work schedules and Diaz was seen hanging out with Adam Levine a lot before she moved on to A-Rod.

Cameron Diaz dated Justin Timberlake for nearly four years. If Timberlake wasn't going to end up with Britney Spears, I really wanted him to be with Diaz. They met in 2003 at the Kids' Choice Awards of all places. They broke up with one of those amicable public statements about remaining friends and they went on to work together on two movies. So I guess they are friends? Either way, these two were also plagued with engagement rumors.

Cameron Diaz dated Jared Leto in another four-year relationship. It's unclear why their romance ended, but it was around the time Diaz's was cementing her place on the A-list and Leto decided to focus on his music with 30 Seconds to Mars. Of course, there were engagement rumors swirling around this couple as well. And they also never proved to be true.

Cameron Diaz dated her There's Something About Mary costar Matt Dillon for three years. It's unclear why their relationship ended, but this appears to be another one of those amicable splits for the actress. He even referred to her as his "muse" in a 2006 interview. And you guessed it, there were false engagement rumors about these two as well.

It's clear that Diaz has had her fair share (or more than her fair share, really) of unfounded engagement rumors. Maybe she is engaged right now and maybe she is not. Wearing a ring on a certain finger and going on a lot of beach vacations with your boyfriend, does not mean that you are headed for the alter. In my one-sided best friendship with Cameron Diaz, I just want the best for her. So if she wants to get married go for it. If not, whatever. I mean she's Cameron Diaz. Just maybe don't call her the female George Clooney. We all know how his love life ended up...