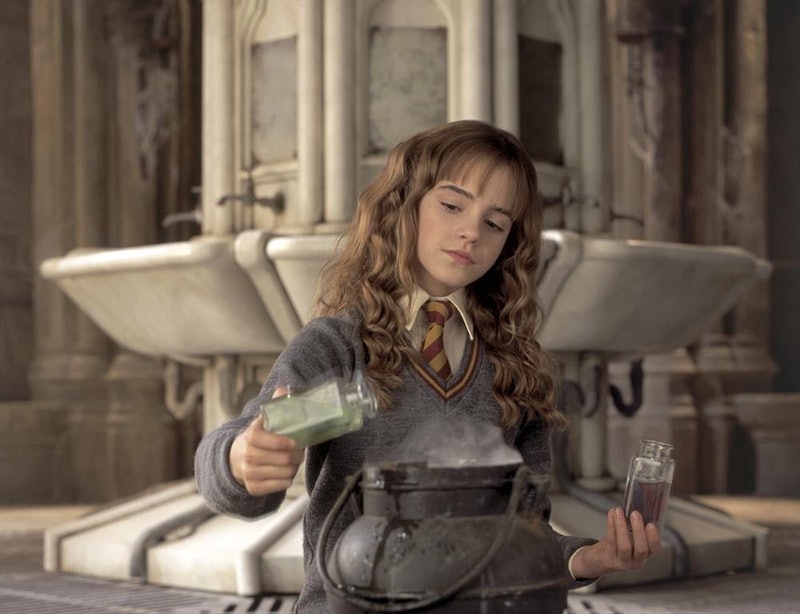 Does October bring out your inner Potterhead more than your desire for pumpkin everything? Fads are fleeting but Harry is forever. The first two films seem so old, yet I remember the midnight releases and over-analyzing every frame of every trailer, so naturally, I'm wondering when ABC Family's 13 Nights of Halloween will play Harry Potter movies for my personal enjoyment.

I even remember when Daniel Radcliffe, Rupert Grint and Emma Watson were cast. Even though we're relatively the same age, I feel like a proud Mamma Weasley when I see how well the Potter stars are doing with themselves. Especially Emma Watson — she's killing it! Though it may seem like embarrassing baby pictures to them, I still like to watch the old Christopher Columbus movies from time to time. Need a fun game? Watch how many times Harry touches a hand in Chamber of Secrets. It's creepy. The boy is more obsessed with hands than he is with Draco Malfoy. Where can you watch the first two Harry Potter movies this Halloween season? There are a few options.

(Might I make a recommendation if you go down this alley? Download Wizard People Dear Reader , a fan-made "audio book" that can serve as a commentary track for Harry Potter and the Sorcerer's Stone. Comedian Brad Neely is hilarious, it's got a following of its own and can be a refreshing take on the Potter Universe.)

Starting October 13, ABC Family is airing a week-long marathon of the Warner Brothers films. You can catch Harry Potter and the Sorcerer's Stone on Monday night at 7:30 p.m. and Harry Potter and the Chamber of Secrets on Tuesday night at 7:00 p.m. The two films will also air on ABC Family in the afternoon the following day in case you miss it and need to set your DVR.

I love a good ABC Family Marathon. I especially love that they often show extended cuts of the films. This used to just be a weekend affair, but the series is too big for a mere weekend, obviously. I'm still confused as to why ABC Family airs them as part of the 25 Days of Christmas, but I'm not complaining.

And if you're opposed to following ABC Family's schedule, you could always try these:

Maybe you're not into commercials or adhering to anyone's strict time table. What is this, Professor Umbridge's class? The first two films are available for rental on Redbox Instant, iTunes, Amazon and Google Play for only three dollars. You can buy a digital copy as well. Gather some friends, dress up, and make a night of it. Do you think the Wizarding community has Venmo? (I know there are magic laws about electronic devices. Don't worry about me.)

Be honest. I know you still have your copies of these movies somewhere. Even if you have to beg your parents to send them by owl. Save your money, rebel against the ministry and dig up those old DVDs. There's tons of bonus content and Easter Eggs that you really had to dig to find. DVD extras have gotten slack! I would say a true fan would already remember how to access all of them, but I'm not one to judge another's level of fan involvement and/or memory. Also I can't remember myself. Are you really old school? Do you have them on VHS? If you did, I would raise my wand to you for sure.