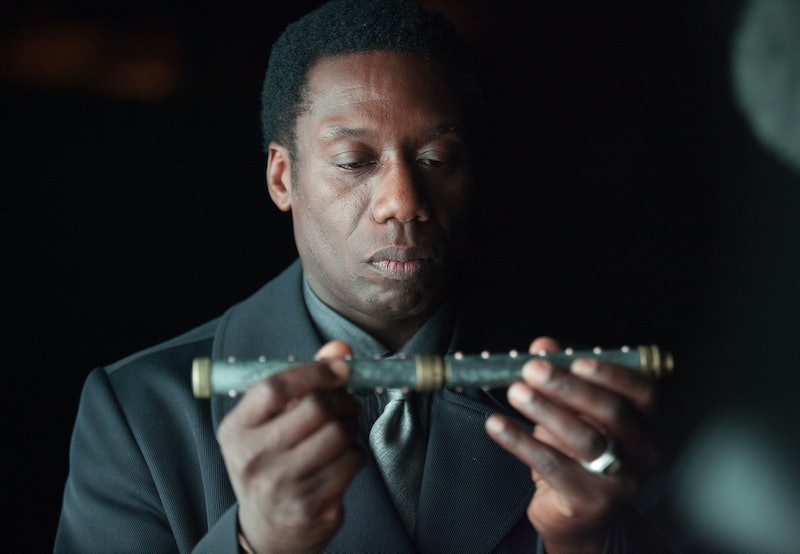 Is it just me, or are Gotham's villains getting goofier as episodes go by? We started off with a murder in cold blood, then child abductors, followed by a weather balloon-brandishing vigilante. But as the story gets a little more serious this week, so will the latest bad guy: Richard Gladwell, a Gotham hitman who brutally kills city councilmen as mobsters Carmine Falcone and Sal Maroni battle for control of the site that will become Arkham Asylum. Because Batman frequently battles organize crime and mafiosos and that's Gotham's entrance point into the canon so far, there are a few hitman characters that have popped up in the comics over time who could be serving as Gladwell's inspiration.

There's the famous Holiday Killer from The Long Halloween , who murders mobsters on every holiday. Like Gladwell, he confounds both Sal Maroni and Carmine Falcone, picking off both men's cronies indiscriminately. In Gotham, Gladwell will be contracted by both mobsters to kill councilmen that support the other's plan Arkham Asylum. But the Holiday Killer turns out to be Alberto Falcone, Carmine's son. And since actor Hakeem Kae-Kazim is not Italian-American and actually pretty close in age to the actor who plays Falcone, John Doman, it's not very likely that he's playing Alberto. But stranger things have happened on Gotham already. Like, say… weather balloons being used to kill crooks.

Copperhead is a classic Batman villain and former assassin who dressed as a snake to kill his victims. Copperhead's method of choice was suffocation with a super tight snake suit (and later, superpowers). But actual copperhead snakes have venomous puncture bites, not unlike the violent puncture wounds Gladwell uses to kill his victims. There's also Deadshot and Deathstroke, two assassins both prided on their supernatural accuracy (who you may recognize from The CW's Arrow). Both began as hitmen before they went through the usual Batman villain transformation into genetically mutated, super-suited psychopaths. But both of them are marksmen, not close-range killers like Gladwell.

Batman's rouges gallery probably won't end up including Gladwell, since it's a little early in the series to be introducing any more classic villains. But since so many of the Batman villains begin as simple street level thugs, you never know. It's a reminder than even when a villain-of-the-week gets carted off to jail at the end of an episode, they might be back looking a little freakier in just a few episodes — especially now that the new Arkham Asylum will no doubt turn out to be the incubation chamber for all of Batman's future foes.