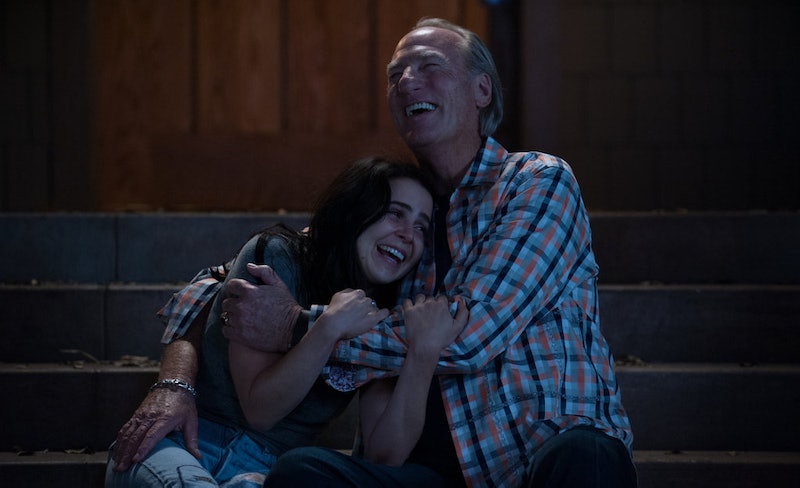 I have a lot of very strong opinions about Parenthood 's "Death Season". I have been keeping my feelings all bottled up and then taking them out on my twitter followers, and this is no longer healthy for me or for them. Like with the slow burn morbidity of Mad Men's Season 5, we won't know who they're planning on killing in Parenthood's final season until — well, until they're killing them right in front of us.

There are already a number of theories floating around, leading with patriarch Zeek's death and then rebelling from that because, hey, Zeek dying may be the death that works best with the narrative, but we've all watched television before and we know that writer's rooms love twists. My personal favorite theory involves Sydney Braverman, charter school bully, going on a killing spree and taking out the whole family come finale-time. That's probably not going to happen, though, and so it falls that we must take it upon ourselves to figure this out before it happens. If we don't then how will we brag that we were right when the time comes? And so, in order from least- to most-likely to die, here are the survival chances of Parenthood's main cast. Excluding the small children, because Katims is not a monster.

She's very young and she's carrying the next generation, that would be super dark of this show.

Plus you can't kill Mae Whitman. You can't kill your best cryer when you're about to have a season specifically designed around sad things, that would be nonsense.

There is a world in which Peter Krause' Adam is not immortal, but there are two huge things counting against him there: They already killed him in Six Feet Under — they recycle a lot of Lauren Graham's Gilmore Girls storylines on this show, but I feel like they wouldn't want to recycle this particular huge death. The other big thing is that Adam, for all his neuroses and control freak tendencies, plays a pretty crucial role as Parenthood's emotional and moral center. It's a very manic center, for sure — but I'd guess that whoever they kill it's gonna be someone we see a lot of Adam's reactions to.

She's in Europe this semester, plus it would be a really terrible idea to kill her so soon after she came out.

They kind of don't know what to do with Drew, so they could kill him to get him out of the way, but two things: He's just a kid (remember: this show isn't that dark), and that would still be way more interesting of a story than they would ever give him.

They also rarely care enough about Jasmine to give her any beefy storylines, but I'm not convinced they have enough time left to deal with the complete Crosby overhaul this death would have to trigger. I just get the feeling they don't care enough to kill Jasmine.

I'm trying to picture where this would work in the narrative, and while it'd certainly be sad (none of these wouldn't be sad), it just doesn't feel like it's gonna happen. He's got like a full season of groveling left to do to win his wife back.

Whitman's crying if this occurred would be legendary. Emmy-worthy, for sure. Also an excuse for Amber to name her baby after her mom.

Her placement so far back on this list will probably be controversial, because Kristina dying is currently one of the more popular theories. And yes, sometimes cancer comes back. The biggest strike against this theory, in my opinion, is that Katims said that they were looking to explore something they haven't before — we already got pretty close to losing Kristina in Season 4's heartwrenching Christmas episode. We already know how her husband, her children, and the rest of the family would react. There's nothing much new narrative-wise there if they just decide to follow through with it on a delay — thrusting us back there after a full season of it just seems cheap... But that's more of a "why I think they shouldn't" — she'd still be one of the easiest to kill.

It’s going to be someone. I don’t know, I have a guess of who it is. I think one person might know and it’s probably the person that it’s going to happen to, but nobody else [knows].

That theorizing sounds to me like she wasn't the one told she was going to die. Unless she's just a very good teaser, in which case damn you Monica Potter!

This is my personal crackpot theory. I accept its crackpot nature. Crosby fell off his motorcycle in the last episode and came back with a limp. He also didn't tell anybody in his family about the fall. It may just be that I've been watching way too much Grey's Anatomy* of late, but those are both things that could be very easily manipulated by a trigger-happy showrunner looking for a heartbreaking twist. He's also the youngest kid, so it pack an extra punch in the shock department.

She, like Zeek, is elderly. Her passing, like Zeek's, would allow the show to deal with the very common familial narrative of losing a parent. It could very well be her, is what I'm saying. I lean against it a little only because we already explored so much of Zeek's relationship to her last season, and we don't need to rehash it in the event of her death. Her perspective should Zeek die, however? Much more interesting.

*It's definitely because I've been watching too much Grey's Anatomy.