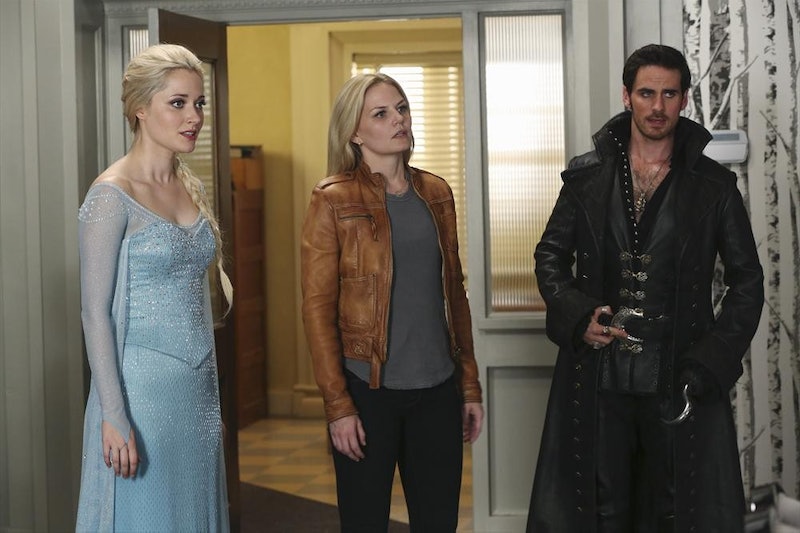 Can someone give this woman a reality check? Once Upon A Time spent most of Season 3 exploring the idea of Emma and Hook getting together and in the Season 3 finale they finally did. It was amazing and fans rejoiced because Hook is so in love with Emma on OUAT that it can't help but make you feel warm and fuzzy. Well, that's not the case anymore, on Sunday night's new episode, "Rocky Road," Emma pushed Hook away by having the worst attitude we've ever seen. And that's really saying something, considering Emma is the queen of bad attitudes.

For the first two episodes of Season 4, Emma and Hook seemed to be on the right track. They were easygoing about the fact that their lives were too crazy for a real date, they laughed together, they worked together like a team. Hook even revealed how much being with Emma had changed his views on women and what it means to treat a woman right — heck, Emma turned him into a feminist. Everything seemed to be going according to plan, all the way down to them sweetly discussing having a simple night at home with takeout and Netflix. So, why would any OUAT fan assume that Hook and Emma could be seeing their last days?

On Sunday night, Emma was so incredibly rude, nasty, and generally unpleasant to Hook. At one point "The Savior" actually said to her pirate boyfriend, "Why can't you just do what I say for once?" I'm still so taken aback that I can't even get into everything that's wrong with that statement. What I will say, however, is that it's definitely a relationship red flag. And I'm extremely disappointed in Emma for going there.

Later on in the episode, Emma also chastised Hook for not following her orders to go back to the police station to wait things out with the Snow Queen safely. Which is fine because he did almost get himself killed by going looking for this woman, but still — Hook and Emma have exhibited that they're a great team and he hasn't done anything to lose her trust as a companion in the field and in romance. So, what gives with Emma's major attitude change? And can someone please snap her out of it before she loses a good thing?

At the end of "Rocky Road," Emma explained that she was being so demanding and controlling over Hook's behavior because "everyone she's been with is dead." I mean, OK, fine. I can understand that she loves Hook and doesn't want him to die like Neal (RIP), but that doesn't mean she should push him away by being so bitchy that it even hurt me beyond the TV screen. Emma has trouble communicating her feelings, OUAT fans have seen that over the past three seasons, but if she keeps treating Hook like crap, he may very well move on. Perhaps to another magical blonde that just joined the Storybrooke scene — can anyone blame Hook for wanting to let it go with Emma if she keeps this up? I mean, he deserves to be treated just as well as she does.