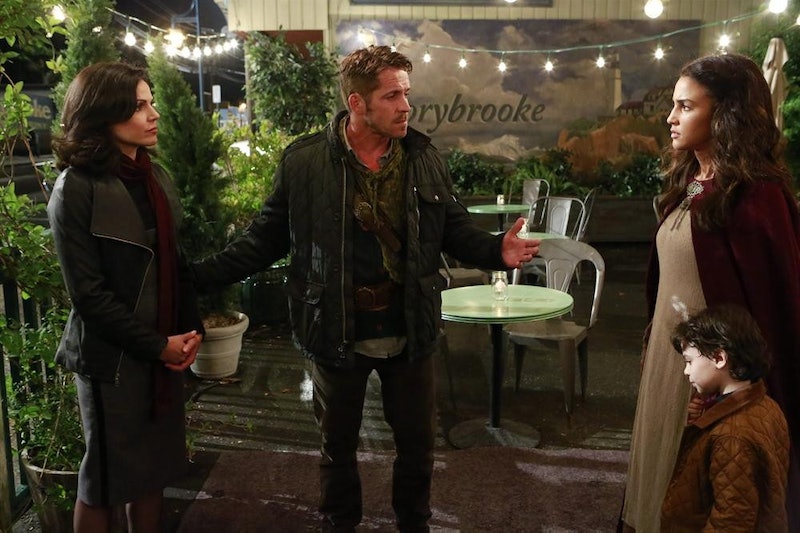 Do you 'ship Robin Hood and Regina? Well, do I have some kind of great news for you. Once Upon A Time Season 4 started off with Regina battling her inner evil and nursing a hell of a broken heart. But on Sunday night, after Regina vowed to find the author of Henry's storybook to create a happy ending for herself, Robin Hood professed his true love for Regina on Once Upon A Time . And, all of a sudden, there's hope again for the former Evil Queen — well, if only Robin Hood makes the right choice to divorce Marian and move on.

Robin Hood called it quits with Regina after Emma accidentally brought Marian to Storybrooke from the past. He's an honorable man and he'd only gotten involved with Regina because Marian had been dead, but when he learned she was alive and in Storybrooke, he knew he had to be with her. And, I mean, I agreed for the most part — if it weren't for Regina killing Marian, she, Robin Hood, and their son would be a happy family. Robin Hood wanted to stay married and so he did. But Sunday night's new episode of OUAT, "Rocky Road," changed all of that.

The Snow Queen attacked Marian (with no rhyme or reason, mind you) and she's currently slowly freezing to death. Obviously, in true Frozen-fashion, Elsa told Robin Hood that an act of "true love" could reverse the curse on Marian after Regina revealed that she wasn't sure how to reverse the curse herself, so he kissed her. And, well, it didn't work. I mean, of course, that didn't work in the Frozen film either, but this was something else.

It turns out that Robin Hood's true love's kiss didn't work because he's not in love with Marian anymore. How do we know? Because he told Regina, flat out, that he was still in love with her and he's just staying with Marian out of obligation. And that's just depressing and so wrong and OUAT needs to fix it. I know that these characters probably don't believe in divorce — they come from the Enchanted Forest and fairytales, after all — but they're in the real world now and Robin Hood has to divorce Marian. He doesn't love her and it's just offensive to Marian for him to stay with her while he knows he's in love with another woman. Marian deserves better and so does Robin Hood.

And, no, I'm not just saying that because I want Regina to finally have the happy ending her rehabilitated self deserves. I'm saying this because no one deserves to be in a relationship with someone who is in love with someone else and because no one deserves to feel like they have an obligation to a relationship that their heart isn't in. There are a lot of flawed relationships on OUAT, but Marian, Robin Hood, and Regina don't have to be involved in one of them. I just hope the series realizes that before some serious damage is done to these characters' spirits.