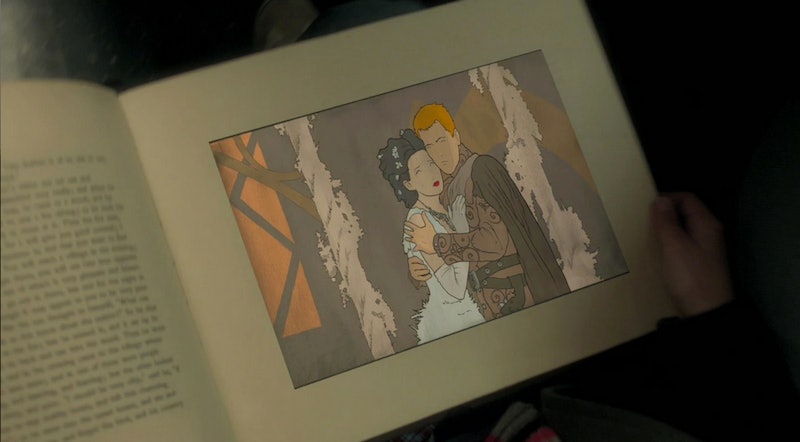 Are you feeling overwhelmed by the Once Upon A Time Season 4 premiere yet? It's OK, I understand. Obviously OUAT fans were anxiously waiting for the series to start its Frozen arc in Season 4, but it might have stopped us from realizing how many other things OUAT had going on after the Season 3 finale. Like, for instance, the fact that Emma had rescued Robin Hood's wife, Maid Marian, from death and unwittingly brought her back to Storybrooke to destroy Regina's chance at a happily ever after. Well, aside from the obvious Frozen moments, Regina's new issue with life as a partially reformed villain took up a big chunk of the OUAT Season 4 premiere. But she's not targeting her anger at Emma or Elsa like we thought — she's targeting the writer of Henry's storybook.

It's an interesting idea for OUAT to challenge the fact that fairytales rarely end with a happily ever after for the villain. I mean, being a villain and making other people's lives miserable doesn't exactly qualify you for a happy ending, considering fairytales are based on the idea that good always prevails. It's also interesting for OUAT to have Regina acknowledge where her issue is actually coming from, rather than killing Marian and/or entertaining a new rivalry with Emma. She's grown up, even if she still can't handle not getting her way.

But who's the unlucky person that will face her wrath now? Regina made it perfectly clear on Sunday night's premiere that she wants to rewrite fairytale history in her favor, even if she has to do it by force. And I can think of one of OUAT Season 4's new characters that might actually be the person she's about to meet — especially since she's going back in time again — Belle's mother. It can't be a coincidence that Belle is so into books. I know, she was looking for adventure and a way out of her simple life, but there's got to be something deeper there.

Which is where Belle's mother comes in. Fans know for a fact that we're going to meet Belle's mother, who'll be played by Frances O'Connor, in Episode 6. At which point, we'll also find out about the deep impact she had on Belle's life. Well, what if that impact were writing the future of all of these characters we've watched for the past three seasons of OUAT? Belle's mother obviously would've been alive during the time of Snow White and the Evil Queen and she could've been so in love with books that she wrote one herself, one that ended up being the written-future of OUAT's characters.

If the past three seasons of OUAT have taught us anything, it's that we should expect the unexpected, but we should also absolutely expect characters to be interconnected in impossible ways. You know, like the whole Neal being Rumpel's son and Rumpel being Pan's son thing. Belle's mother might be the reason Belle has such a strong love of books because she wrote it to be so, just like she predetermined the lives of all of these characters.