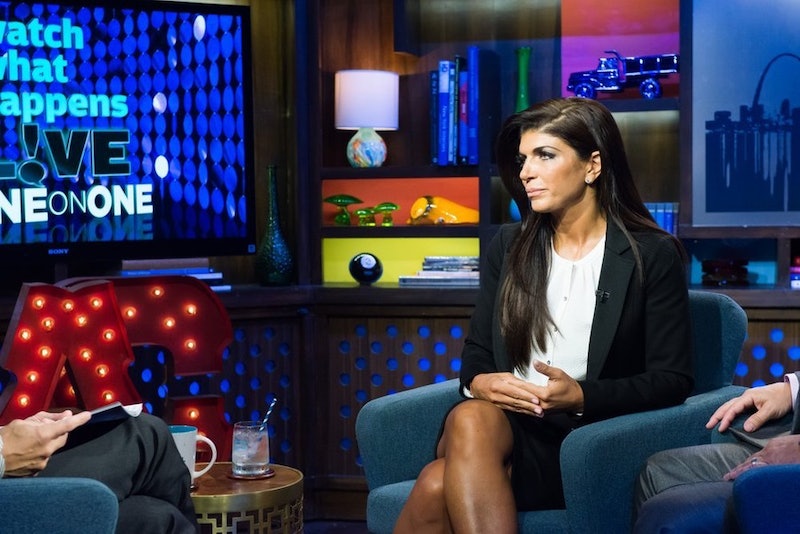 After all of the drama of the Florida trip, The Real Housewives of New Jersey are still talking about the rumor that's plagued the Aprea family for the past few episodes. And it came as a surprise when Teresa Giudice didn’t apologize to Teresa and Nicole, setting things up for an even bigger fight on next week’s finale. For all of her talk about not wanting any drama and having more important things going on in her life, Teresa’s not taking the path of least resistance. If she really wanted this to blow over, she would have just apologized half-heartedly and moved on. But for once, I have to respect her decision, because the twins are working overtime to spin this story and put the responsibility where it does not belong.

Teresa G. was actually a lot of fun during this episode. She embarrassed Gia while getting pedicures by talking about the birds and the bees and tales of her IUD (I'm guessing) gone wrong. And her over-the-top sarcastic screams of disappointment about not being invited to the tasting party? Classic Season 1, Season 2 Teresa. But even Dina, her BFF from way back when, could convince Teresa to apologize for hearing and repeating the gossip — AKA, what everybody has done since this first came up.

The Apreas have strategically decided to go after Teresa, Amber, and to a lesser extent Dina for spreading the rumor, rather than trying to prove the rumor isn’t true. Instead of taking on Victoria Gotti (“V.G.,” as they’ve been saying on the show) and trying to prove that she was lying, they’ve instead insisted that they’ll settle that in court, and instead saying that to spread a rumor about someone’s mother is “un-Italian” and deserves to be iced out.

But that's absurd. Obviously a rumor like that is insane, and nothing that they would want spread around. But Nicole happily told Jacqueline, Kathy and Rosie earlier in this episode. And both twins have talked about it at length in their talking head interviews. TereSSa and Nicole are not about to let this one go easily, especially since they seem confident enough in their place on the show that they’ve already pledged to not spend time with both Amber/Jim and Teresa.

So the cast is split down the middle leading up to the final episode. That's right — doesn’t it feel like the finale is coming out of nowhere? It’s all been leading up to Dina’s event at Project Ladybug. She's being "assisted" by TereSSa and Nicole, but the event will be attended by the entire cast and is now perfectly set up for finale-appropriate fireworks.