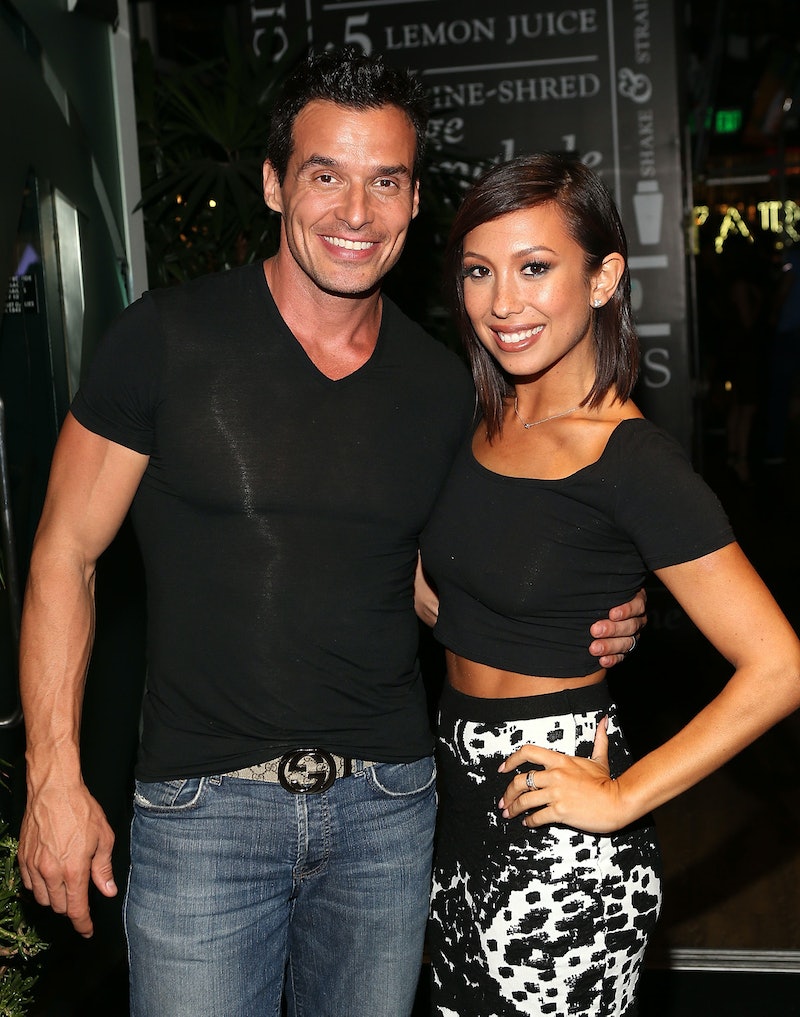 People are still talking about the return of "The Carlton" on Dancing With the Stars , which Alfonso Ribiero brought back to our television screens last Monday. As if almost predicting how impossible it would be to upstage the dance of the 90s (sorry, Macarena), ABC is switching it up this week in more ways than one. Not only will the partners be changing partners for a single week based on America's votes (well, the portion of America that uses Twitter), but the show will be injecting the couples' routines with a handful of styles that have rarely, if ever, graced the stage. Along with the usual sambas and mambos will be hip-hop, burlesque, and Bollywood dance. But it made me wonder: Has Bollywood dance been done on DWTS before?

Antonio Sabato Jr. will be taking a break from dancing with Cheryl Burke and instead take the stage for the Indian style of dance with new temporary partner Allison Holker (paired with Jonathan Bennett from Mean Girls on non-switch weeks). Antonio had tough run last week in a show full of heartfelt moments to complement the "Most Memorable Year" theme, featuring tributes to lost loved ones and overcome insecurities. On air, Antonio claimed his dance was inspired by his big break in a Janet Jackson video, but the actor later revealed on his Facebook page that the story really behind the dance was a fire that destroyed his childhood home and almost killed him in Italy when he was a young boy.

But Antonio will now need to leave it all on the stage to keep up with the major competition, and Bollywood is the perfect dance to do so. And while it's not a common style for DWTS, the show has tried it on for size in the past.

Bollywood hasn't appeared on DWTS since 2012, during the show's all-star Season 15. The dance, done by Gilles Marini and Petra Murgatroyd, was dubbed "hotter than a curry" by Len Goodman and, not to be outdone, guest judge Paula Abdul called it "as smoldering and spicy as a vindaloo." (Their Michael Scott-esque metaphors are a can of worms for another day.)

But with so much positive feedback, why has it taken so long for DWTS to bring back the awesomeness that is Bollywood dance? They seem to only be catching-up now to what other dance shows have known for so long. In fact, So You Think You Can Dance started including Bollywood dance back in Season 4.

We've come a long way from Bollywood's first appearance on talent television, when contestant Katee Shean on Season 4 of So You Think You Can Dance picked out the genre from Cat Deely's hat and said she got "something called... Bollywood?"

The dance wowed judges and America alike, landing Katee and partner Joshua Allen on both the hot tamale train "and the vindaloo express" (again, with the Michael Scott thing), and helping judge Nigel Lythgoe find one of his new favorite dance styles for the show. “It’s amazing how the world has got so many different dance moves that come together," he said after the performance. "I wish the world would come together with dance than what we’re doing at the moment.”

SYTYCD has since featured countless interpretations of Bollywood dance, all choreographed by renowned Bollywood dancer and choreographer Nakul Dev Mahajan. He's brought Bollywood to the SYTYCD stage season after season since it first appeared, featuring dances that range beyond the classical guy-girl interpretation. Most recently, he gave SYTYCD their first ever "Disco Bollywood" routine:

Mahajan even brought his expertise to an entire Bollywood-themed challenge of Season 4 of America's Best Dance Crew in 2009. The episode showcased a variety of styles in the Bollywood cannon, including Bharata Natyum, Kathak, and Bhangra. As if evoking Lythgoe, ABDC showed how the crews combined their unique style with the Bollywood style they had been assigned.

But Nakul isn't the only one whose brought Bollywood to the country's attention. Miss America 2014, Nina Davuluri — a classically trained Bollywood dancer — did a piece for the talent portion of the competition before taking the crown.

And if Bollywood dance can help nab the Miss America crown, who is to say it can't help Antonio get the mirror ball trophy?