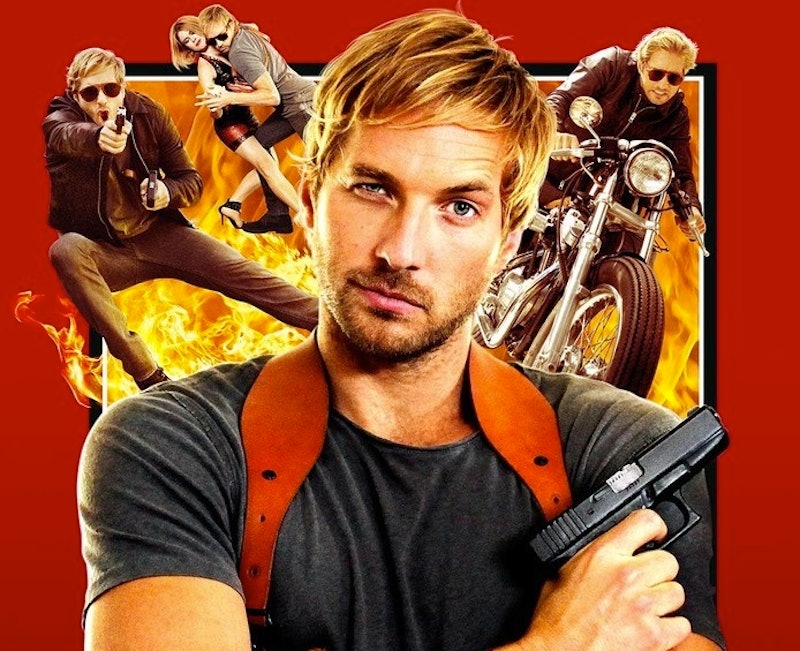 When I first heard that Veronica Mars was getting a spin-off web series featuring Ryan Hansen's attempts to get his character his own spin-off show, I couldn't resist all of the meta jokes that Play it Again, Dick had the potential to offer us. Now, four episodes into the series, Play it Again, Dick has become more than just a witty web series for fans of Veronica Mars to watch and enjoy. It's become an eight minute life lesson, spliced with humor and Chris Lowell's naked butt. Which is exactly how I like to receive my life lessons, honestly.

To be fair, Play It Again, Dick wasn't trying to teach us any lessons. It wasn't trying to be as profound as it was. Maybe I just see meaning everywhere. In Hansen's quest to get his pilot on the air, I see my own life struggles. I relate to him and he teaches me in return. In fact, in these first four episodes alone, I've already been given nine lessons on life, love, and the film industry. Lessons that I'm now willing to share with the rest of you, so we can all walk away a little wiser and a little more amused for having watched Play it Again Dick.

1. It teaches you how to speak Spanish.

Raise your hand if you, like me, have taken over four years of Spanish and still had no idea what Hansen was saying. Just me? Okay, bye... In any case, "A lot of beer and a lot of Mezcal (a Mexican alcoholic beverage similar to tequila)" is the only Spanish phrase you'll pick up from Play It Again, Dick so far, but I'm sure it won't be the last.

2. It teaches you that acting is an art.

When trying to get Francis Capra on board to appear in the Private Dick spin-off, Hansen and Capra have a poignant (and hilarious) conversation about acting as an art. They're not factories that can just produce nuance at the snap of someone's fingers, ok? Acting is an art and like any other art it must be practiced and nurtured. Food for thought.

3. It teaches you that fitness is important.

Jason Dohring and Hansen spend almost all of their brainstorming time having an intense work out session for the benefit of the cameras and the viewers at home. Because it's important to keep yourself in shape and live a healthy lifestyle, especially if there are cameras in your house and/or you're going to appear on a spin-off series in front of millions of people. Or order some Chinese and veg out like Hansen does afterward. Your choice, really.

4. It teaches you to have a good marketing campaign.

What would any show or project be without a good marketing campaign? While Kristen Bell is still deciding whether or not she has any interest in this project, Hansen proudly displays his first piece of merchandising: a t-shirt with the word dick on it. With a name like Dick Casablancas, the jokes write themselves. If you've got something to advertise, try to think of something punchy and noticeable to put on the t-shirt.

5. It teaches you that tropes are not bad.

The CW executives weren't even the slightest bit interested in Hansen's idea for a spin-off until they realized he was planning to do a revival of the buddy comedy and explore the tropes of it in a new and interesting way. Tropes, or reoccuring elements in fiction, are often said to be bad because they show a lack of creativity, but there's a reason tropes continue to be used. They work. And they're not bad.

6. It teaches you the pros and cons of working with friends.

Dohring might be the most enthusiastic of the people that Hansen has brought on to help with the project, but he's also portrayed as more than a little controlling. Between telling Hansen to lose some weight for the show to making the behind-the-scenes film crew laugh at his joke so it can go on the gag reel to suggesting he get top billing even in the title, Dohring teaches us that working with friends can be fun but you should know where to draw the line on taking their advice.

7. It teaches you to address problematic issues.

Not even two minutes into the first episode, Bell points out that no one will want to watch a show that focuses on Dick because he was an unlikable character who was complicit in her character's date rape. Play It Again, Dick pulled no punches when it came to addressing issues that fans had with Veronica Mars and it teaches us that we need to address problematic issues within ourselves and within our work instead of sweeping them under the rug and hoping no one notices.

8. It teaches you that you don't have to wear pants indoors.

Between Dohring doing pull ups in Hansen's living room to Lowell walking away from the computer to reveal that he's not wearing any pants, Play it Again, Dick was fan service galore. But it's important to me that Lowell wasn't wearing pants, not because of the fan service but because of the lesson it teaches. My home is my castle, you guys. And in it, I have the confidence to make wearing pants optional.

9. It teaches you that when all else fails, have a good title sequence.

To be honest, pretty much everyone who hears about the project knows that it's going to be a total bomb. But that title sequence, though. It just proves that people will totally be interested anything if you market it just right. And isn't that the most important lesson of all?