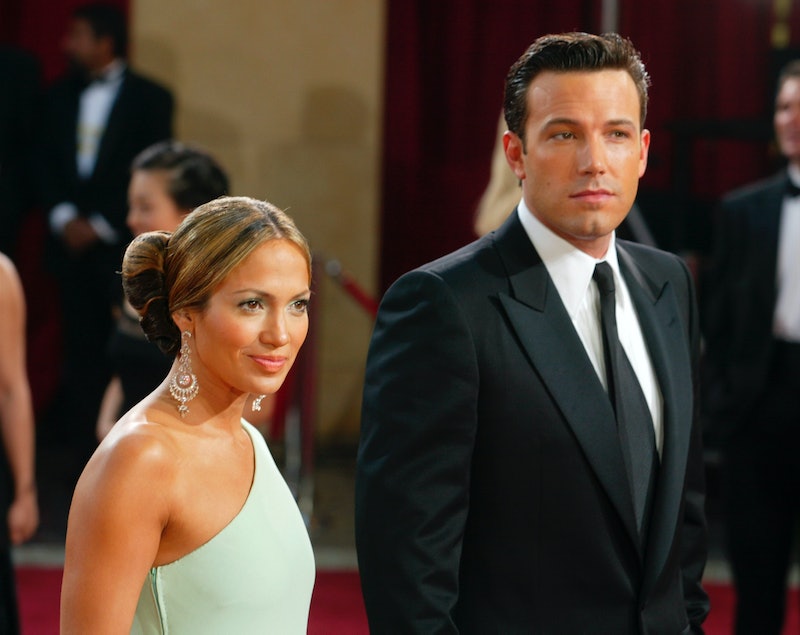 Jennifer Lopez is just living the life of a mature, responsible ex-girlfriend with excellent movie tastes...or so I gathered from Lopez's tweet about watching Gone Girl on Sunday. The "Booty" singer and Ben Affleck, who stars in Gone Girl, used to date way back when and starred in a duo of subpar films called Gigli and Jersey Girl. They also began the celeb-couple name phenomenon by going by Bennifer. Of course, all of that wonder and magic ended in 2004, and Lopez and Affleck went on to different marriages. Since then, Lopez has moved on to American Idol and Affleck won another Oscar, as you do. The former Hollywood It couple might be well and done 10 years later, but that’s just romantically. Lopez looks to have pretty solid relationships with her former flames, and judging from her tweet, she can add Affleck to her growing list of past paramours she’s at peace with. So how can Affleck pay it forward?

The actor has been pretty busy with Gone Girl promotion, not to mention defending honor and justice in the upcoming Batman v Superman film as Batman, but he surely has time to step out of Gotham to throw a little love Lopez's way, even if it is in a tweet, an Instagram, or maybe even naming a character after her in one of his upcoming screenplays.

To get an idea of what he should do, maybe Affleck can take a page from P. Diddy, who was full of compliments about Lopez's career and her recent music video with Iggy Azalea during an interview on Access Hollywood.

Or maybe he could share some award ceremony snacks, like ex Casper Smart did during the MTV VMAs this year when he took the time to find Lopez in the audience to share some Skittles.

So sweets, shout-outs, possibly a spin in the latest Batmobile? Fine, that last one might be too big of an ask, but what's a favor between friends and amicable exes? Just a small spin in the sleek car and possibly a tour of the Batcave, for Bennifer's sake at least.