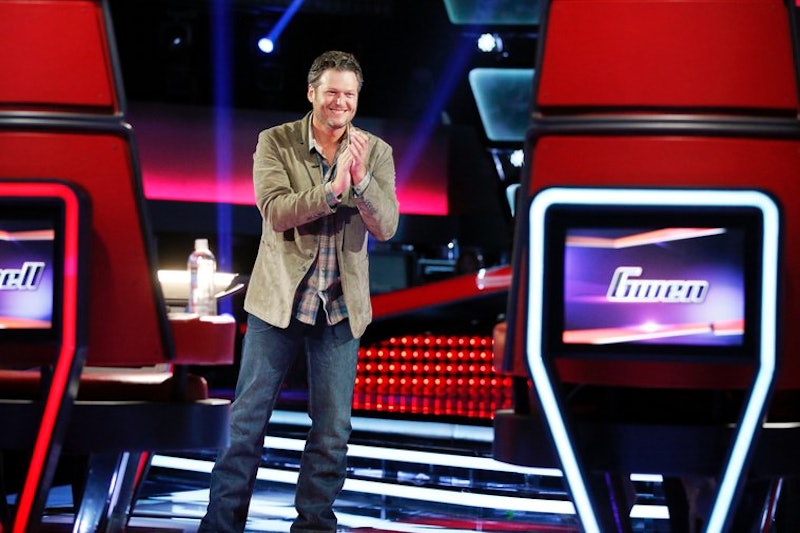 Blake Shelton: country super star, lover of Adam, four-time Voice winner, and still clueless to what the word "boo" means in a non-Halloween context. He is a lot of things, and with the 2014 team Blake Shelton has lined up for himself in the blind audition rounds of The Voice's Season 7, it looks like he plans to add "five-time Voice winner" to that list. Blake has somehow managed to get a winning method down: pick people that I like, that America will also like. He also happens to have a bit of a monopoly — no matter how hard Adam tries — on The Voice's country and teen artists, who always bring in the votes when they're good enough.

But mostly, it just seems like Blake is a really good coach. He's not the best singer on the panel, but he's nurturing, he brings in helpful mentors (or in this case, four helpful mentors in the form of Little Big Town), and he keeps up with his contestants after the show, even if they didn't win. Blake will begin to guide a whole new crew as the battle rounds begin Monday night, and he's forced to pair off his teen heartthrobs with his teen crooners, his pop country with his classic country. OK, he may not have a lot of variety, but there's a lot of talent within his team of 12. Let's see who stands the best chance to bring Blake home the Big Number Five:

Grant got the "audition montage" kiss of death that means we won't know much about him and his soulful 16-year-old self until the battle rounds.

Kensington was also featured in a montage, but we at least got to hear Blake shout out the "gravel" in her throat, and see some serious guitar skills on the high school senior.

Tanner's audition seemed like one that they might have told to work on it and come back next year; but at 17, he was already coming back for a second time, and Blake was sure excited about it. Hopefully, as the only coach who turned for Tanner, Blake can cultivate the ballad-singing potential he heard in his audition.

Bree seems like a real artist who sometimes have trouble fully showing their craft on shows like these, but Blake saw Bonnie-Tyler-like potential in her, as the only coach to turn his chair for her audition.

Tackling Macy Gray is quite the task, and Fernanda did it with confidence, if not perfection. Her pre-package showed her to be a cool, laid back kid with a lot of spunk; if Blake can hone in on the raspy potential of her voice, Fernanda can prove herself in the battle rounds.

John is the Dez Duron Legacy contestant: the handsome guy who just can't seem to quite get past his guitar and tight white t-shirt. But that intriguing whistle, and a strong audition, just might set John apart from the pack.

With a smart song choice, a unique arrangement, and the singing show catnip that is being a talented 15-year-old, Justin got the very last turn of the competition in the audition rounds. If Blake can work some of the breathiness out of his voice, this wholesome kid will be getting the mom and daughter votes all the way to the finals.

Taylor came out with a lot of power, style, and confidence on "You Ain't Woman Enough" in her audition; now she'll just have to prove to Blake that she's woman enough to grab the one spot he's probably reserving for a country female power vocalist on his team.

"Let's teach America some country music." Blake is clearly ready to get to work with Craig, a classic honky-tonk voice if I ever did hear one. The only problem is Blake has at least one other dominant male country voice on his team (see below), and according to his battle pairings, there isn't room for both.

Blake wasn't an obvious choice for Reagan, who considers herself and R&B artist, but he's proven to have a great understanding for how to coach the young ones, and at 15, Reagan will need a lot of of guidance and support. But it's probably Blake who just won the lottery on this one... he's always loved the teenage girls with affected voices and a YouTube channel, but he's never had one with quite so much control or power as Reagan showed on "Give Me Love."

She came back! And this time, Allison came in with confidence and full control of her raspy alto. Blake is at his best with pure country artists, and he's proved over the seasons, young artists. Allison is both of those, and in addition to looking and acting like a tiny, little Miranda Lambert, she's guaranteed not only to do well with Blake as her coach, but in the polls.

Plenty of shows have had troves of great country artists who won not just because they were good, but because people who like country artists also happen to like to vote for singing shows... but there haven't been many that looked like James. James looks and sings like the best of the best in country music right now, but made the smart choice of auditioning with a classic: "Nobody Knows" by Garth Brooks; not to mention, he's had some practice opening for singers like Trace Adkins and Brad Paisley.

More like this
Jason Derulo Is Launching A New Singing Show In The UK
By Maxine Harrison
18 Years After 'American' Idol, Jennifer Hudson & Simon Cowell Reunited On Her Talk Show
By Radhika Menon
'Big Brother' Is Already Looking For New Houseguests To Compete In Season 25
By Brad Witter
Here's The Full List Of Zach's Confirmed & Potential 'Bachelor' Contestants
By Kadin Burnett and Grace Wehniainen
Get Even More From Bustle — Sign Up For The Newsletter