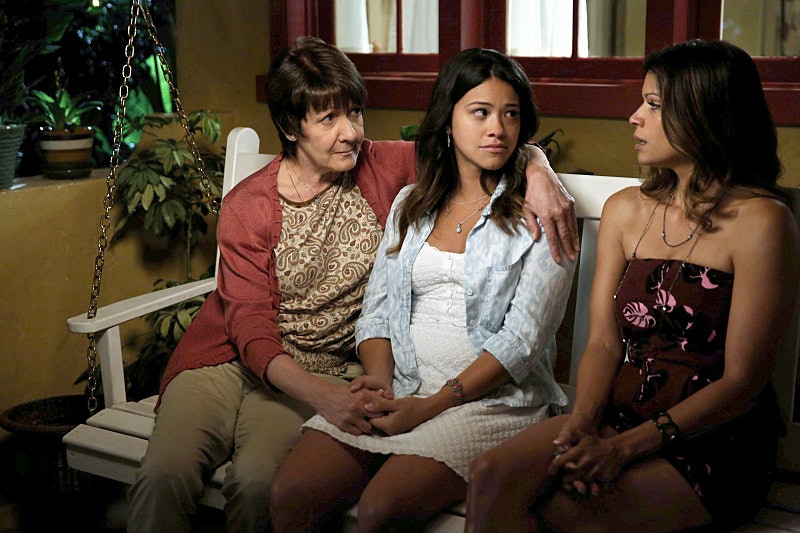 Don't expect your typical CW fare from new series Jane the Virgin . The new CW series premieres Monday, and already it's promising an interesting change of pace for the network. Forget vampires, superheroes, and rich kids — Jane the Virgin isn't interested in borrowing from any of The CW's well-established series. That's not to say that Jane the Virgin is an entirely without its own influences, of course: Showrunner Jennie Snyder Urman tells The Hollywood Reporter that Jane the Virgin is "Ugly Betty meets Gilmore Girls." If that statement is anywhere close to accurate, we're in for one fantastic fall of drama.

For those of you who don't know much about this telenovela-based series (it's source material is Venezuelan series Juana la Virgen ), it has an extreme premise that will make you never want to go to the OBGYN again. (But, obviously, please do.) 23-year-old Jane, who is keeping her virginity on lockdown until she gets married, finds herself artificially inseminated with her boss' sperm. It's a crazy concept, so it's no wonder that the show is being compared to ABC's own telenovela-inspired, Ugly Betty. As for Gilmore Girls, that aspect of Jane the Virgin is equally as evident: Much like Rory, Jane relies heavily on her mother and grandmother for support during this, umm, "confusing" time in her life. There's clearly DNA from both series in Jane the Virgin, but what should the new CW series borrow from its predecessors? Here's what made both Gilmore Girls and Ugly Betty so awesome.

Gilmore Girls is a family dramedy, with the main crux of the show being the relationship between young mom Lorelei and her daughter Rory. Ugly Betty was not exclusively about main character Betty's home life, but it was part of what gave Ugly Betty that spark. Betty's family was tight-knit and wacky as ever, and provided a grounded quality to the show's outrageous plot lines. And speaking of that...

Storylines don't get much more outlandish than the premise of Jane the Virgin, and if the new series can do extreme plotting as well as its predecessors, we're in for a treat. Gilmore Girls was set in a town with a ton of colorful residents, inspiring a variety of head-scratching plot points (obviously, we're talking about any scene with this guy.) Ugly Betty, which was loosely based on Columbian soap opera Yo soy Betty, la fea was by far the more extreme of the two series — characters "came back from the dead," found out they had a secret child, and plotted murder against their co-workers. Both these shows got away with their wacky storylines because of their...

Ugly Betty and Gilmore Girls weren't devoid of serious moments, but both series used a heavy dose of quirky humor to offset some of their more oddball situations. That's not to say Ugly Betty and Gilmore Girls are alike in their humor: Gilmore Girls is famous for its rapid-fire dialogue while Ugly Betty prided itself on snark. (Never forget Mark and Amanda's amazing one-liners, usually at Betty's expense.) Jane the Virgin needs to establish its own comedic identity — no one wants to watch an artificially insemination storyline that takes itself a little too seriously.

Jane the Virgin may borrow from Ugly Betty and Gilmore Girls, but I have faith that the new CW series will be anything but unoriginal. Tune into Jane the Virgin Monday at 9PM on The CW and check out the trailer below.