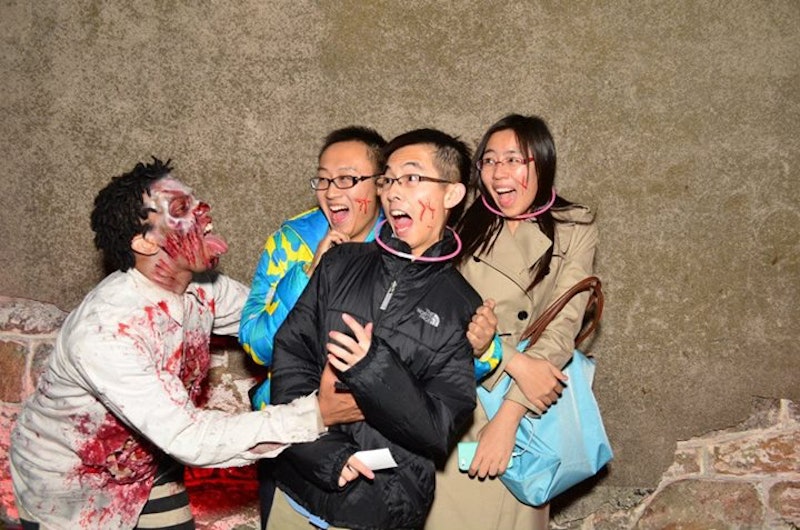 Have you ever wondered what it’s like to work at a haunted house on Halloween? Good news: Reddit has a whole lot of stories, and it’s totally willing to share all of them. And before you ask, yes, most of them are just as funny as you think they are. Isn’t Halloween the best?

When we were kids, my friends and I used to put together a “home haunt” — the kind of haunt really dedicated civilians create in their basements, backyards, garages, and what have you — every year, so I’ve always had a soft spot for haunted houses. I ended up growing up into the kind of person who watches the Travel Channel nonstop during the month of October, purely because it’s chock full of documentaries about the freakiest high-octane haunted attractions in the U.S. But if you really want to know what it’s like to work at one of those types of haunts, you have to go straight to the source — and that’s exactly what an AskReddit thread posted yesterday by TheManliestChild did.

Titled “Haunted house workers of Reddit, what’s the funniest thing you’ve ever seen someone do in the attraction?,” it’s filled to the brim with Halloween hilarity. From tiny girls scaring the pants off of big burly dudes to some of the best improvising you’ll see this side of Whose Line Is It, Anyway?, read on for the scoop. Oh, and for the super mega haunt fan? There’s actually a whole sub-Reddit devoted to the haunt industry, r/hauntedattractions. It’s relatively small, but it’s always at its most active around Halloween (because duh); head on over there to check it out.

1. There’s a lot of waiting, but the payoff is worth it.

This? This is the best.

2. People cause a lot of destruction when they’ve had the pants scared off of them.

This one is actually relatively mild in terms of how much destruction actually happened; another one in the thread featured another tiny girl scaring a team of rugby players so badly that they took down four walls in a maze room. Scare actors are very good at what they do.

I also get a kick out of this image:

3. You’ve GOT to take care of your voice.

The above is what one haunt actor had to say in response to the question, “How do these actors not lose their voice in the first hour of the night?” Proper vocal technique is a must, so aspiring scare actors (and actors in general)? Consider taking a voice and speech class or some singing lessons. Or do what JayEssDee does and get creative:

FurbyFubar? You win the Improv All-Star Award. It’s not an actual award, but if it were and I had the power to bequeath it upon whomsoever I chose, you would be it.

5. Be prepared for some…questionable behavior.

I was really going to try not to make a “scared shitless” joke, but, well…too late.

For the curious, this is what a ghillie suit looks like:

It’s a type of camouflage, and basically it makes you look like Swamp Thing. I can see how that would be freaky if you’re not expecting it — and given that the point is to make you not expect it… well, you do the math.

6. And consider wearing some armor.

Every time threads like these pop up, I’m always astonished by the number of stories in which people’s gut reactions to being scared are just to beat the ever-loving hell out of whatever freaked them out. Fight or flight, I guess? Me, I just yell obscenities. It’s a good, curse-ridden time.

7. Weird substances: Not even once.

This one came from a fellow patron, not a performer, but I’m sure the scare actors had a field day on the other end. A word to the wise: No illicit substances before going to a haunted attraction.

There’s a walk-through of the Evil Dead house in question on YouTube, by the way — check it out:

Did I spend two hours last night watching haunt walk-throughs on YouTube? Why, yes, as a matter of fact, I did. Why do you ask?

8. Embracing the unexpected makes for the best scares.

Does anyone else kind of want to see what would happen if that guy and the mad scientist guy from further up got together for an improv session? I bet it would be the best.

9. Performers have all the power.

I really hope the experience scared that guy off of catcalling for life.

10. You will make people piss their pants.

Literally. And that's how you know you've done your job and done it well.

Images: Terror Behind the Walls/Facebook; Giphy (2)