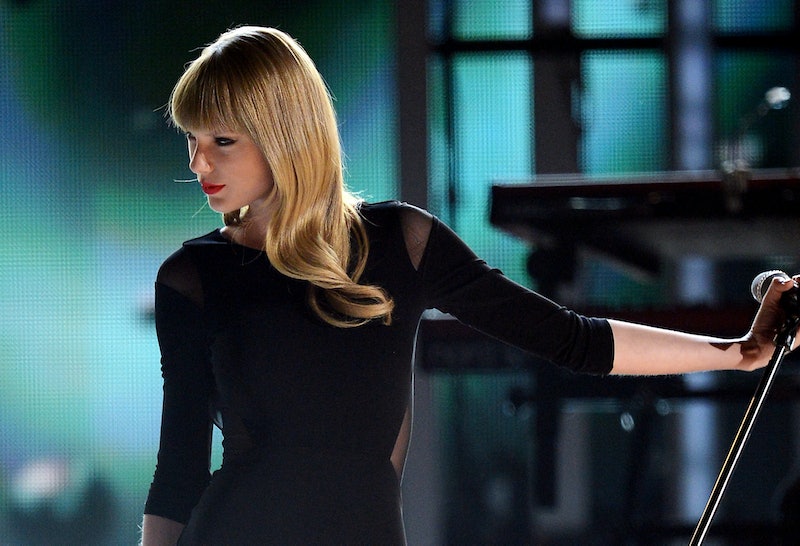 On Monday, Good Morning America (GMA) aired a preview of Taylor Swift's new song "Out of the Woods," giving fans their first real taste of the "Shake it Off" singer's newfound '80s synth pop sound — and it's pretty fantastic. According to Swift, "Out of the Woods" is not her next single, but rather, just a song that she thinks "best represents" her upcoming new album, 1989. Oh, and the lyrics could possibly be about her relationship with Harry Styles, One Direction's dreamiest dreamboat and owner of the world's most perfect man bun. Swift spoke about the inspiration behind "Out of the Woods" in a new video for GMA:

This song is about the fragility and kind of breakable nature of some relationships. This was a relationship where I was kind of living day to day, wondering where it was going, if it was going to go anywhere, if it was going to end the next day — it was a relationship where you kind of never feel like you're standing on solid ground. And that kind of feeling brings on excitement, but also extreme anxiety and kind of a frantic feeling of wondering, endless questions. And this song sounds exactly like that frantic feeling of anxiety and questioning, but it stresses that even if a relationship is breakable and fragile and full of anxiety, it doesn't mean that it isn't worthwhile, exciting, beautiful, and all the things that we look for.

Though Robin Roberts and company had the NERVE to talk over the brief clip (didn't they know that millions of Swift's fans were tuning in JUST to hear the 30-second preview of "Out of the Woods"??), you can still get a pretty good idea of what the full song is going to sound like:

Swift told People recently that the sound of 1989 is "based in synth pop and keyboards and automated drums and vocal layering" — all of which can be heard in this new "Out of the Woods" snippet. The chorus is repetitive, yes, but it's also already stuck in my head, so, Swift and fun.'s Jack Antonoff, who co-wrote and produced the track, definitely did something right! The thundering percussion and dreamy synths remind me a little bit of Roxette's "It Must Have Been Love" — one of my favorite cheesy ballads from the late '80s. I'm into it.