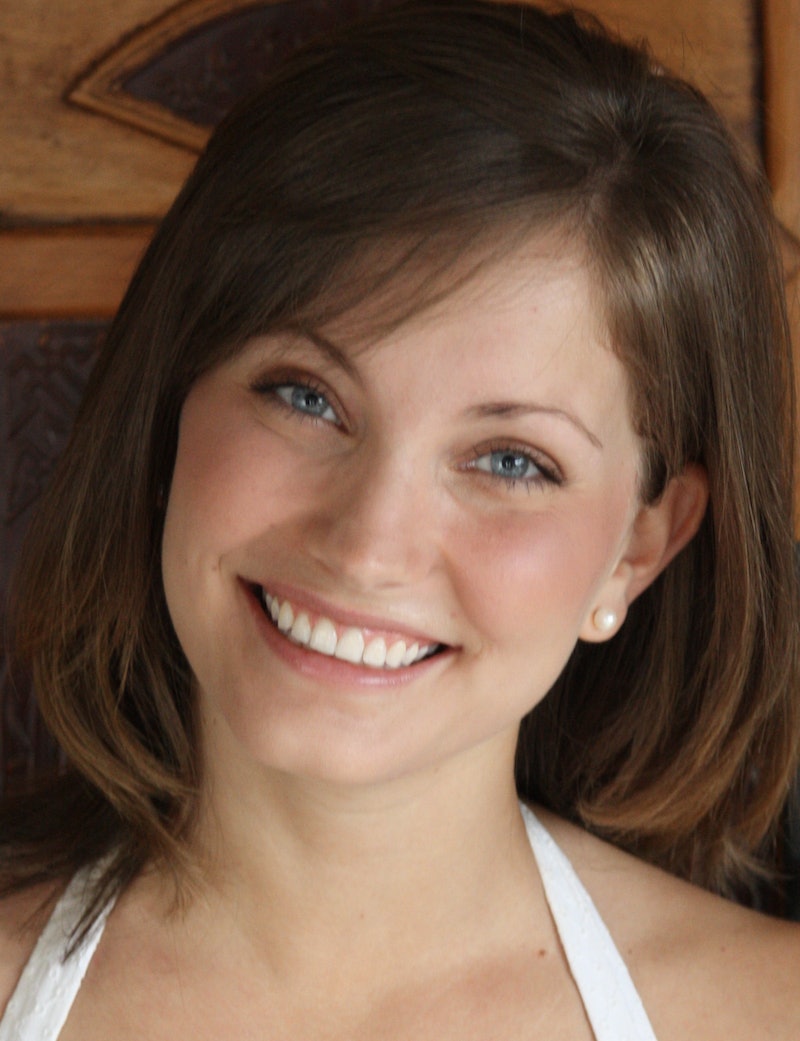 A few months ago, Emily Lindin decided to publish her own, raw, emotional diaries from the time she was branded the middle school "slut," in order to start a conversation about bullying, slut-shaming, and women's sexuality. The reaction to Emily's diary from other women (and the world) was immediate and intense. I talked to Lindin about her original tumblr, her forthcoming documentary, and the space that the word "slut" occupies in our culture.

BUSTLE: Tell me a little bit about the UnSlut Project.

EMILY LINDIN: The UnSlut Project started as a tumblr of my own diary entries from when I was the school "slut" in middle school. It's word-for-word exactly what I wrote down as a preteen and teenager, with a bit of added commentary in brackets from my current perspective. The only thing I've changed is the names — including my own name — to protect the identities of the people involved and my own family. It's developed into an online community for women to share their experiences with slut-shaming and sexual bullying and we're in the process of crowd sourcing the funds for a documentary film, which is also part of the project.The UnSlut Project has two goals: to reach out to girls who are currently suffering and offer them some hope for the future; and to demonstrate the extent of sexual bullying and "slut-shaming" in our schools, media, and culture, so that we might all work toward change. The stories and experiences that women have been submitting through the website prove that slut-shaming is a strong negative force that has affected many of our lives, and I hope The UnSlut Project will start conversations about this issue among people who might never have thought about it before.

You've gotten so many positive reactions to your bravery in putting your own middle school diary on the web for others to read. Why did you decide to open the project up to become collaborative?

It became collaborative naturally once people started reading my diary entries. Immediately, I began receiving messages from women who said they could relate to my experience and who shared their own stories with me. I had thought my experience was pretty rare, but all of a sudden I was realizing how common it was! It was moving for me to read their stories, and I wanted to share that with my readers. I wanted others to be able to see just how many of us have gone through something like this, as well as the different ways slut-shaming can manifest.

How did it grow into a documentary?

Well, I only have so many diary entries, and I wanted to continue the project after I ran out. I knew I would do that by continuing to collect the stories of other women online, but a film seemed like the best way to reach as wide an audience as possible. Most people who visit The UnSlut Project's website are already interested in the idea of slut-shaming. But a film will spread the word to people who probably never thought about it or don't believe it's an important issue. So I pitched the idea to Jessica Caimi, who's a director and also one of my best friends from college, and she was really excited to get on board. Working together has been a lot of fun so far!

Your work focuses a bit more on slut-shaming that happens on a personal level, but what do you think about the media slut-shaming of female celebrities? How can we combat this in our culture?

I don't think slut-shaming on a personal level is a separate issue from the slut-shaming of celebrities in the media, it just operates on a different scale. It reflects a need to constrain female sexuality in a specific way that we as a society both create — news media sources play to their audience's existing biases — and then absorb back from the media. I think the conversations that happened this week surrounding Miley Cyrus's performance at the VMAs morphed into something really heartening: rather than just categorizing the performance as too overtly sexual for a woman and dismissing it, many people were discussing specifically why it bothered so many viewers and whether or not that was slut-shaming and how we should frame conversations about this type of thing in the future. These conversations are so important to have, and I love watching them develop.

What do you think about SlutWalks and other movements that aim to reclaim the use of the word slut?

People who want to reclaim the use of the word "slut" usually have the same overall goal as I do, they're just approaching it differently. I think that's great and I fully support SlutWalks. One of the challenges that crops up most often when people reclaim the word "slut" is that their efforts are misinterpreted by people who still believe in slut-shaming. I think too many people are still using the word (and other language like it) completely seriously, so embracing it and using it to empower women can be kind of confusing. My approach is to call into question the whole idea of a "slut," how we define it and draw lines between what is socially acceptable behavior for women and what is not, and why "slut" even makes sense as an insult — it shouldn't. I think engaging people in these conversations leads them to realize that the perceptions that they're been taking for granted are unnecessary and even quite harmful.

What advice do you have for girls or teenagers who might be experiencing bullying or slut-shaming?

First, confide in adults you can trust. It might not be your parents and it might not be a teacher or someone who already knows you personally, but do some online research to find a sex-positive doctor or counselor in your area and shoot them an introductory email. If your insurance won't cover their services, they'll at least be able to point you in the direction of a free clinic. If you live near a university with a graduate psychology department, look into whether they offer free counseling by doctoral students. Second, it's important to remember that people bully based on their own insecurities and fears. What people say about you doesn't define you, it reflects them. You are the only person who defines who you are, so focus on figuring that out. One way to do that is to find something you're good at and that you like doing — a sport, painting, a musical instrument, writing, etc. — and spend time doing it. Get as good at it as you can, and have fun! Now you're defining yourself as Alice, the singer/songwriter, instead of letting others define you as Alice, the school slut. And read through the stories women have shared at unslutproject.com — you're not alone. Many of us have suffered through this type of thing and gone on to live wonderful lives.Is there anything else you'd like Bustle readers to know about you, the UnSlut Project, or Slut: A Documentary?So many things! Let's see. We only have a few days left to raise the $18,000 we need to make Slut: A Documentary, so please visit our Kickstarter page and donate whatever you can! This film will feature the stories of girls who were driven to suicide by sexual bullying, women who have experienced the effects of slut-shaming in their own lives, media figures, sexologists, psychologists, and other experts. It will demonstrate the extent of this issue in our schools, communities, media, and culture — and explore the steps we can all take to work toward change right here in the United States and Canada.

We also hope you'll get involved in The UnSlut Project by sharing your own experience and/or opinion and reading other women's stories at unslutproject.com.