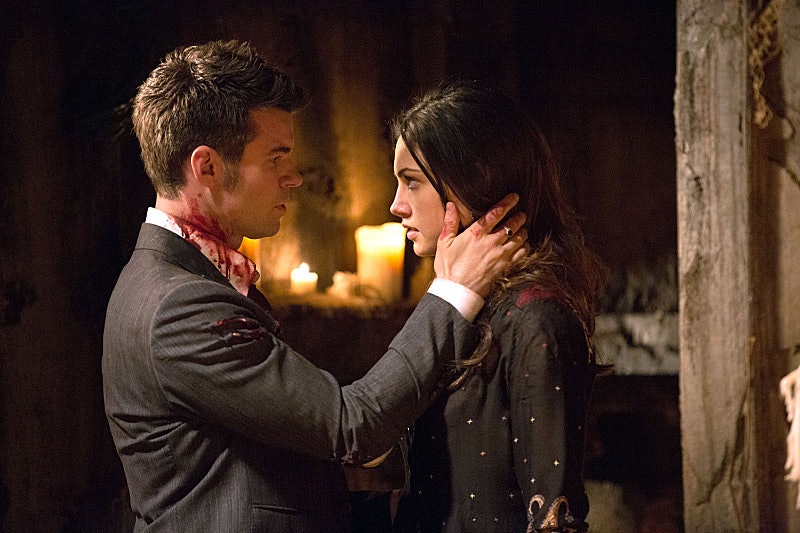 Because we really need another supernatural love triangle in our lives. Vampire Diaries fans have suffered through five seasons of the never-ending Damon-Elena-Stefan love triangle and it still might not be over. And now, it seems like The Originals Season 2 is setting up Halijah to fall down the same slippery slope as Stelena fell. On last Monday's episode, Elijah realized that he couldn't help Hayley deal with becoming a hybrid and losing her daughter and that the only person who could was his brother, Klaus. Which is really a mature and confident gesture, considering how great Halijah was as a couple in Season 1. But during Klaus' first conversation with Hayley, it seemed like The Originals was setting them up to challenge Haylijah staying together and Julie Plec really shouldn't make this mistake twice.

While the love triangle on TVD works, even when it's infuriating, a love triangle on The Originals would ruin everything. First of all, the stakes on The Originals are significantly higher — there are babies involved, there are entire races of supernatural creatures involved, and there are two seriously creepy Original parents that need to be taken care of. It's neither the time nor the place for Elijah and Klaus to have a falling out over who deserves to be with Hayley. Especially because, most fans will remember, Klaus never had any interest in Hayley. In fact, when he found out she was pregnant, he wanted her killed.

Yes, they hooked up once and yes, they share a child together, but that doesn't mean that "Hayley and Klaus: A Love Story" should ever be a potential turn of events on The Originals. Unfortunately, however, Julie Plec loves to infuriate her fans to the point of desperation and that seems like exactly how The Originals Season 2 plans to go.

Last Monday Hayley grieved and killed and cried and basically told Elijah that things might be too different for them to be together now that she's a hybrid. Which is totally an exaggeration because Elijah absolutely still loves her, but whatever. Elijah obliged and instead of trying to force Hayley into letting him help her through her dark place, he decided to help her in a different way — by having Klaus talk to her. Obviously, it killed Elijah to no longer be able to protect Hayley, even from herself, after he spent all of Season 1 waiting on her hand and foot and fiercely trying to keep baby Hope out of harm's way.

And, instead of acknowledging Elijah's big gesture — being confident enough in his love for Hayley to let her be helped during the most vulnerable of times by a man other than himself — The Originals turned it into a potential love triangle. The pep talk Klaus gave Hayley was so emotionally charged with possible romance that it was painful to watch. But the potential Klayley relationship started last season in the Season 1 finale when they shared a moment while they looked over their daughter in her crib. So, with Monday night's latest moment, it sure as hell seems like Julie Plec is about to take The Originals down the same beaten path as TVD with the "torn between two brothers" storyline.

I mean, it would work all too perfectly — Elijah falls seamlessly into the role of emotional, devoted Stefan while Klaus falls easily into the bad boy with a good heart but questionable morals trope of Damon and Hayley's caught in the middle. She's turned into a hybrid and all of the sudden she needs Klaus more than Elijah who was perfect for her before. That seems a lot like how things went down with Elena after she became a vampire (TVD chalked it up to the sire bond). But would Plec so blatantly copy her own romantic device almost to a tee and expect fans to be OK with it?

The Originals is a great series, mostly because it's so different from The Vampire Diaries by not letting romance overwhelm its vision and main storylines. Another part of what made it great was Elijah and Hayley's relationship and the potential it brought out in these two characters. Throwing a challenge at Haylijah by way of her becoming a hybrid is totally fine, but it would ruin everything if the series created an Elijah-Klaus-Hayley love triangle. And it would probably end with Elijah getting a dagger in the chest and no one really wants that.