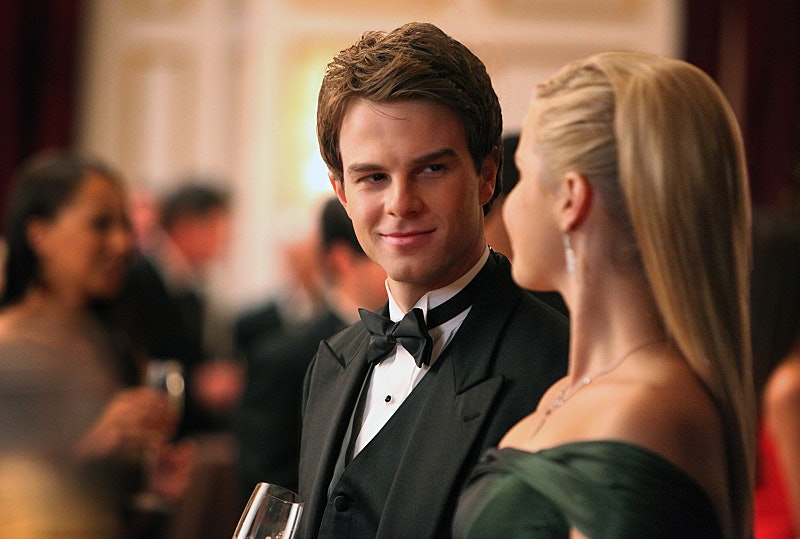 He's obviously not in New Orleans just to serve his mother and that's a GREAT thing. On last Monday's episode of The Originals , "Rebirth," Kol Mikaelson returned and it was the next best thing to Claire Holt's Rebekah Mikaelson returning full-time to give Klaus a hard time. For anyone who was afraid that the new Originals in New Orleans would get old really quick — I mean, how long can we watch Finn's Norman Bates routine without wanting to rip some throats out à la Hayley — fear no more because the most mischievous Mikaelson is back. The series revealed that Kol is hiding in the body of new Season 2 witch, Kaleb, as if this guy needed the added bonus of a British accent to get us excited about his return. In his past role on The Vampire Diaries, Kol essentially played the mischievous, disobedient little brother that just DGAF about what his older siblings wanted him to do. And, even though it seems like he's under Esther's thumb on The Originals Season 2, I can absolutely see him going the same route that he took on TVD — throwing caution to the wind and creating chaos in his wake. Someone's got to add a little color to the war going on in New Orleans, right? And Kol's way too smart and devious to blindly follow Esther like his brother Finn.

So, how exactly will Kol's time on The Originals pan out? Get ready for a bumpy and devilishly fun ride now that this Mikaelson is in town.

He'll Hide In Plain Sight With Davina For Awhile

Here's the thing with Kol — he can only do what he's supposed to do for so long before he gets bored with it. Which is probably why he's been daggered and killed multiple times. But I can absolutely see him charming Davina within Esther's plan for awhile since he's stuck in Kaleb's body anyway. He loves messing with people and, while I think it'd be kind of creepy for him and Davina to get together considering how young she is, can anyone resist Kol? Whether he's in Kaleb's body or not?

With Klaus and Elijah otherwise occupied with the stress of figuring out WTF is happening in the Quarter, The Originals has been seriously lack in snide humor. Which just so happens to be Kol's speciality and, thankfully, death didn't suck that out of him. So, if nothing else, we can be 100 percent certain that Kol's going to lighten the mood a bit during his stay.

In the Season 2 premiere, Kol obviously made a crack at Finn because he's so damn boring. And that one crack certainly won't be the last, mostly because Finn will never get less boring, but also because this is what Kol does. He entertains himself by getting under everyone's skin — especially his brothers — which isn't exactly what Klaus and Elijah need right now, but it's fun to watch.

He's never been a fan of Esther's magic, her desire to kill her children, or following the rules. So, why would Kol stick by her this time? He might be hanging around because it's easier for him than trying to convince Klaus and Elijah that it's actually him inside of Kaleb's body, but that won't last long. Especially when Esther starts ordering him around and eventually reveals that she plans to kill him again this time.