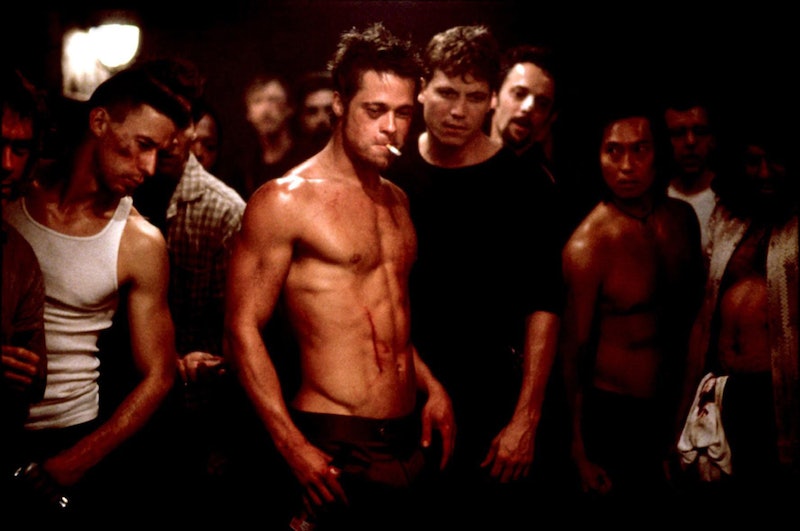 It's been 15 years since David Fincher's most memorable movie, Fight Club, hit theatres. It's been 1.5 decades since Tyler Durden entered your subconscious and handed you a bar of soap, begging you to join in his revolution against The Man and take part in his must-not-be-named boxing club. While many films have dissolved quicker than your skin under a chemical burn, Fight Club remains a classic years later. Whether its the film's big twist, its unique usage of narration, or constant breaking the fourth wall, we indulge in our inner teenage rebel when we revisit the film. It's hard to believe that when the film first debuted 15 years ago, it bombed at the box office. The film that took $63 million to make brought in just $37 million domestically. Ouch.

And though you may have caught all the built-in easter eggs: The cinematic cigarette burns at the top of the screen, the payphone which reads "No incoming calls allowed," and Durden's many pre-plane appearances, here are 19 extra tidbits you may not have noticed:

Director David Fincher claims there's a Starbucks cup visible in almost every scene of the film. But apparently, the coffee conglomerate didn't want their cups visible in scenes of destruction. Can I get a tall, no-foam project mayhem mocha with a side of gelatin?

Helena Bonham Carter is 5' 2", so she wore massive platform shoes to be closer in height to the two male protagonists.

During a scene in which one of the Fight Club members sprays a priest walking by, the camera shakes slightly. This is because the cameraman couldn't stop laughing. See?

Brad Pitt didn't want Tyler Durden to look too perfect, so he had a dentist chip his front tooth for the role — because who would survive all those gruesome fights and come away with a perfect mug?

Helena Bonham Carter insisted her makeup artist do her makeup left-handed, because she figured Marla would be bad at that sort of thing.

It's widely known that Brad Pitt's Tyler Durden randomly appears in many scenes before he is introduced to the audience on the plane. He appears in split-second flashes across the screen, on a moving walkway in the airport, and even in a commercial for Bridgeworth Suites. Check out the lower right corner of the screen:

Brad Pitt, being the upstanding son that he is, didn't want his parents to watch the film. They insisted, but decided they should have listened to Pitt once they saw the scene where Durden forces a chemical burn on The Narrator's hand.

Jared Leto plays a Fight Club recruit with insanely bleached blonde hair, and when Pitt's character is giving a speech to the group, he looks directly at 30 Seconds to Mars singer Leto when he mentions "rockstars".

Russell Crowe was the original choice to play Tyler Durden.

Bob's boobs were made of birdseed.

On the DVD commentary, Edward Norton reveals that in the scene where he's sitting on the toilet looking at an Ikea catalog, he was actually nude from the waist down.

Yes, that is a penis spliced into the final frame of the film:

The character of Marla could have been played by Reese Witherspoon or Sarah Michelle Gellar, who were both offered the role.

When Marla says: "I haven't been fucked like that since grade school," the line was actually supposed to be: "I just want to have your abortion," but a producer at FOX found it too offensive to keep in the film. Ironically, the producer found the new line even more offensive.

When The Narrator is shown in the icy cave with Marla, his breath was added in post-production, and was recycled from Leonardo Dicaprio's breath in Titanic .

At the beginning of the film, after the usual FBI warning is shown, there is a special Tyler Durden version of the warning that reads as follows:

The number Marla gives The Narrator — 555-0134 — is the same as Teddy's number in Christopher Nolan's Memento .

And just for kicks and giggles, here's my personal favorite scene from the film, a fun snippet to revisit 15 years later. "Let me tell you a little bit about Tyler Durden..."