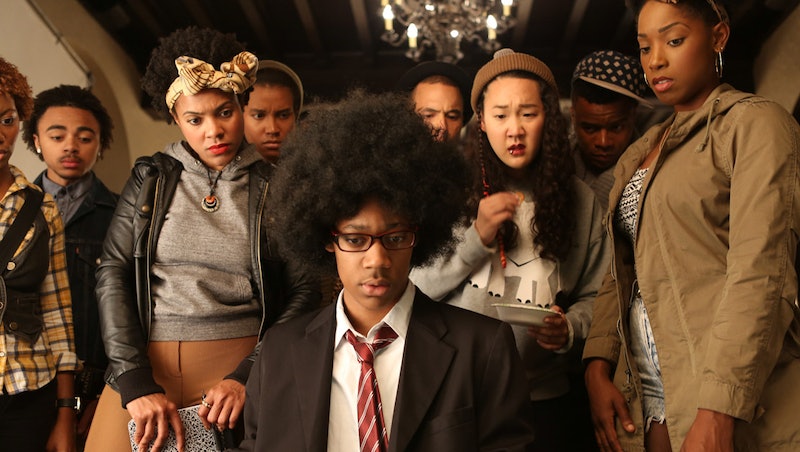 "You're only technically black." That's a line spoken by a white character to a black one in a movie appropriately titled Dear White People , which hits theaters Friday, October 17. It's a film destined, and designed, to stir conversation, and perhaps controversy. In a sort of inversion of the usual formula, the white characters in Dear White People play second-fiddle to the black ones. They're less fleshed out and more outrageous — all for the sake of the satire, of course. But this film's success doesn't lie in its subversion of whiteness. Dear White People triumphs mainly in its subversion of the idea that there is one prevailing type of blackness.

"A lot of the characters [in the first drafts of the film] were given different shades of the black experience," director Justin Simien tells me. "But they weren’t necessarily illuminating something new about the identity experience. And ultimately that’s what the movie’s about, it’s about identity, so I had to make some hard choices and I had to figure out ‘who are the main characters that I want to follow?’”

Dear White People, helmed by first-time director Simien and funded by an enthusiastic Indiegogo campaign, presents, as the film's tagline puts it, what it's like being a "black face in a white place." And yet, the bulk of the film's meat lies not in the black characters' relationships with their white peers, but with the black characters' relationships with each other. Dear White People navigates its waters through the eyes of very different, intersecting, conflicting "kinds" of blackness, and it's this eye toward inclusion that allows the film to actually succeed in exploring identity.

"[The writing process] was just sort of whittling it down to the smallest bits, where I felt like if one thing was missing the conversation would be incomplete, we’d be missing some aspect of what we were saying about identity and self," Simien says of the main characters he sat down to write. He landed on four, played by Tessa Thompson (Veronica Mars), Teyonah Parris (Mad Men), Tyler James Williams (Everybody Hates Chris), and Brandon P. Bell (Hollywood Heights).

To try to summarize them in a line would be to defeat the point, but for exposition's sake: There's Sam White (Thompson), the combative biracial black power activist and host of the Dear White People radio show, who one character describes as what would happen if "Spike Lee and Oprah had a pissed-off baby." There's Lionel Higgins (Williams), a shy and gay journalist who doesn't feel accepted by the black or white communities on campus. There's Coco Conners (Parris) — birth name Colandrea — who's reaching for reality TV and YouTube stardom and who is terrified to be reduced to her blackness. And there's Troy Fairbanks (Bell), who'll manipulate his personality to fit in with whichever race will pave his way to success.

Suffice it to say that though they do not function as the collective end-all be-all of black variety, they run the gamut in a way I've rarely seen in one place onscreen.

The film's greatest struggle is in placing these characters within a coherently structured narrative, but the characters themselves are cogent, captivating, if rarely explored in relation to each other.

For the actors, sometimes the film made them confront modes of blackness altogether foreign to their own. Speaking to a roundtable of reporters last Wednesday, Parris recalled getting ready for a scene in the film where her character was dressing up for the campus "release your inner Negro" theme party at the film's climax.

"Just being in the trailer, I remember [the make-up artist] putting on the foundation and it’s four shades too light, and the blue contacts and the blonde hair," she said. "I remember looking in the mirror and feeling so uncomfortable, and I actually started to cry, and Justin [Simien] and I had to have a few words, because for me — I was so overwhelmed by the image I was staring back at, because I know there are women in this world who feel like this is the only way that they can look beautiful."

There are certainly more bases out there, but those in Dear White People are thoughtfully covered — from the discomfort of feeling like an other in one's own race, to grappling with the expectations your culture and your community have for you. It's the latter that brings the film its title, and it's also what brings it a universality that works beyond the racial level.

The college setting facilitates the negotiation of identities in a particularly potent way, as Simien lays out in his explanation of the choice of placing the story on the campus of an elite university. "On a college campus, everything is sort of boiled down to its most extreme parts. Every inch of your adult life is going to be spent deciding sort of how ambitious you want to be, going for things, feeling the limits of your potential because of your identity, whatever that may be to the world at large."

"But in college that’s all condensed into four years, and it’s condensed to a very specific group of people, and there’s this urgency to sort of stand for something right now... It’s just the American experience, but at its absolute highest boiling point, I think, for a young adult. And the thing about being a young adult is that you haven’t done anything yet, you don’t have many life experiences, but there’s all this pressure to very quickly figure out who you are and project that out into the world. And that to me was just ‘that’s what we’re doing,’ it’s just the perfect microcosm.”

Dear White People certainly is a microcosm; add racial unrest to that college journey and you're sure to make some headlines eventually. Add genuine diversity of identity and you've got a film that paints blackness more effectively than any I've seen in quite a while.