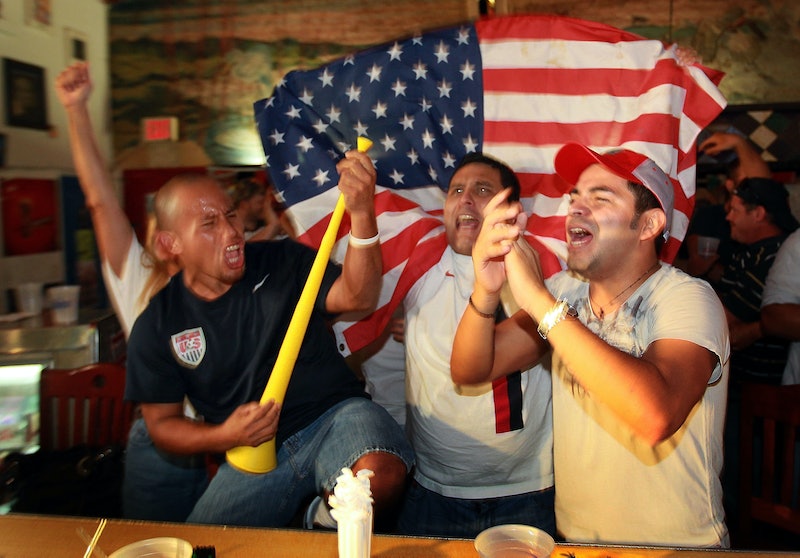 The land of opportunity, or nah? For Americans and citizens of the world at large, the promise of the American dream and the fortunes that come with it seems to be slowly deteriorating, and taking with it, perhaps, the idea of the United States as a superpower. The Pew Research Center surveyed 44 countries on how to get ahead, and found that the US, along with other more developed nations, were considerably more pessimistic about their futures than developing nations like Bangladesh and Nicaragua. Success, it seems, is becoming harder for Americans to attain, and easier for others. Even more interesting was the difference in methods that Americans and citizens of other nations thought this success could be attained — the US, after all, still values individuality above all else.

The Pew's comprehensive global study of national economies determined that while a median of 65 percent of participants from advanced economies, like the US and many parts of Europe, thought that their children would be facing dire economic straits, 50 and 51 percent of emerging markets, like Mexico and China, and developing economies like Uganda thought that their children were in a position to be remarkably successful.

Asia's Optimism and the value of education

Asians are particularly optimistic about their children's futures, with 94 percent of Vietnamese, 85 percent of Chinese, 71 percent of Bangladeshis, and 67 percent of Indians noting that their kids would exceed their parents' accomplishments. And what is the driving factor behind such success?

For the vast majority of these countries (and all of the Asian countries), education is the key to prosperity. In South America, respondents overwhelmingly chose education as the single most important aspect to a good life, with 86 percent of Venezuelans and 85 percent of both Colombians and Chileans citing schooling as the most important component of getting ahead.

Interestingly enough, the United States as a whole seems to disagree with this notion, instead crediting hard work as the key to success. This trend towards devaluing education in favor of perseverance is evidenced by the continuing decline of the number of Americans enrolling in college. Last month, the Census Bureau reported that between 2012 and 2013, the college population of the United States decreased by 463,000 people. The same thing happened between 2011 and 2012, which means that in 2013, there were nearly a million fewer college students across the United States than there were in 2011. This, the Bureau reported, is one of the biggest drops in the nearly 50-year history of the survey.

Of course, this decline was justified by the boom in enrollments between 2006 and 2011, during which a stunning 3.2 million students flocked into colleges and universities across the country. This may have been due in part to the faltering economic climate of the time — Anthony Carnevale, director of Georgetown’s Center on Education and the Workforce, told PBS that college enrollment is cyclical, and follows the markets. As jobs become more scarce, people decide to go to college as a "safe harbor," putting off the difficult job search. But as jobs become easier to find, young Americans are more drawn to the immediacy of making a living than continuing their education.

the rising cost of not going to college

But this may be a dangerous precedent to set — while Pew suggests that Americans value education less than hard work, the numbers show that an education is key to making a higher salary. Another Pew report from earlier this year, ominously titled "The Rising Cost of Not Going to College," determined, "Millennial college graduates ages 25 to 32 who are working full time earn more annually — about $17,500 more — than employed young adults holding only a high school diploma."

On virtually every measure of economic well-being and career attainment — from personal earnings to job satisfaction to the share employed full time — young college graduates are outperforming their peers with less education...the disparity in economic outcomes between college graduates and those with a high school diploma or less formal schooling has never been greater in the modern era.

Even so, Americans remain fiercely committed to the idea of hard work above all else — this is, after all, where equal opportunity comes to shine, is it not? The idea that a college degree, or really just a piece of paper, determines your level of success, seems somewhat antithetical to American exceptionalism. 57 percent of Americans strongly disagreed with the statement, "Success in life is pretty much determined by forces outside our control," suggesting instead that our own actions are responsible for both our achievements and our failures. 73 percent of American respondents said that working hard was the most important factor in determining success — the highest proportion in all advanced economies, and a full 23 points ahead of the global median opinion of hard work.

Interestingly enough, American respondents were also the most likely amongst advanced economies' citizens to cite being male as important to getting ahead. Only 5 percent of advanced economy respondents overall said that being male was crucial, but nearly three times as many Americans said the same, with 14 percent of participants citing gender as a major determinant of success. It seems bit difficult to argue for gender equality in the US when more than one out of ten Americans believe that being female essentially shuts the door of opportunity.

This may be why the majority of countries now say that better opportunities are at home, and not abroad in the United States or other countries. 72 percent of respondents in emerging markets and 65 percent of those in developing economies said that "the good life" would be better attained in their home countries than in a foreign land. So open up the American borders while we can, Congress. Because apparently, soon enough, nobody's going to want to come.