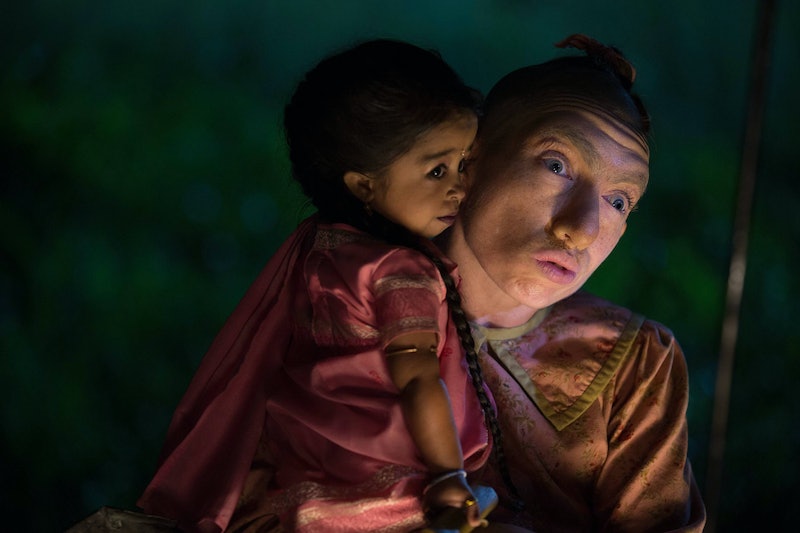 American Horror Story: Freak Show is finally here and the first episode was a lot to handle. Between Twisty the clown murdering everyone and being straight up terrifying, to learning that Elsa Mars is also a "freak," the show was an hour and a half of weird and it was pretty amazing. But knowing that Ryan Murphy and Co. are no strangers to creating their own realities, I can't help but wonder which AHS "freaks" are real and which Elsa Mars employees are modified for television.

In case you missed it, Season 4 of American Horror Story takes place in Jupiter, Florida at a local freak show that the townspeople are attempting to run out of town. A clown begins to murder people for reasons that have yet to become apparent and freak show owner Elsa's (Jessica Lange) dream of becoming a performer seems to be slipping away from her. Throughout the season, we will start learning who everyone is and how they landed within the Freak Show family.

A whole new cast of characters were introduced and in true Murphy style, he brought in the real folks who we should be celebrating: real life people who are living through extraordinary uniqueness and owning it. But who exactly are the real "freaks" in the cast and how do they feel now that they are in the spotlight? These five awesome people are who you should really be paying attention to:

Siggins plays Legless Suzi and yes, she has no legs in real life. “People stare at something they don’t understand,” Siggins told FX. “We’re just like you, we just come in different forms.” Siggins was born with Sacral Agenesis, which is a fetal disorder that affects the lower spinal area (and everything below that). Although Siggins had legs, they didn’t work, so doctors removed them when she was two years old. She said her options were to be eventually blind in a wheelchair or have them amputated.

“I kind of like the way I am. I would never change it,” she said. “This is my normal.” Besides not having legs, Siggins was miraculously able to have two children despite her condition, which is amazing. She even said that there were no complications.

“I’m powerful and awesome and I have these and I’m a freak and I’m an actor and I’m a freak actor, playing a freak and it’s awesome,” Fraser told FX in an interview. Fraser plays Paul the Illustrated Seal on AHS and he has even performed in a real freak show before that, because he loves being on stage.

Fraser was born with a disease called Phocomelia syndrome. For the most part it causes upper limbs to be shortened and absent and although it’s rare like in Fraser's case, it results in the absence of the bones in arms making it appear that the arms are attached to the body. He said that the disease was a result of his mother taking a morning sickness prevention drug called Thalidomide which was used in the '50s and '60s. But according to the Mayo Clinic, the drug was responsible for many birth defects.

Ben Woolf plays Meep on AHS and he was also the creepy basement monster in season one. Maybe you remember him from the last episode when he bit the head off a chicken (it was pretty disturbing actually). Ben was born with Pituitary Dwarfism which means that the pituitary gland doesn’t produce enough growth hormone resulting in slow growth.

Woolf went through chemotherapy as a child, which he said forced his bones to close at an early age. “I find it very challenging for me when I go out in Los Angeles," Woolf told FX in an interview. "It’s kind of hard, there which is weird because you don’t think it should be. You think they would be more accepting of people who are different. It’s kind of the opposite actually.” Come on, LA; get it together.

Murphy made headlines when he cast Amge, an Indian actress who just so happens to be the smallest person in the world. “Regular people should not underestimate people who are small,” Amge said in an interview with FX. As Elsa's assistant Ma Petite, Amge is basically about to become everyone’s favorite AHS star. Plus, this may not be the last we see of the actress: her dream is to be a Hollywood actress, and AHS is a pretty good career booster.

At 23 inches tall and weighing 11 pounds, Amge is not about to let you pick her up and cuddle with her. “I don’t like it if I am being held like a baby. I get mad when someone annoys me by touching my hair or keeps touching me without permission.” Right on, sister.