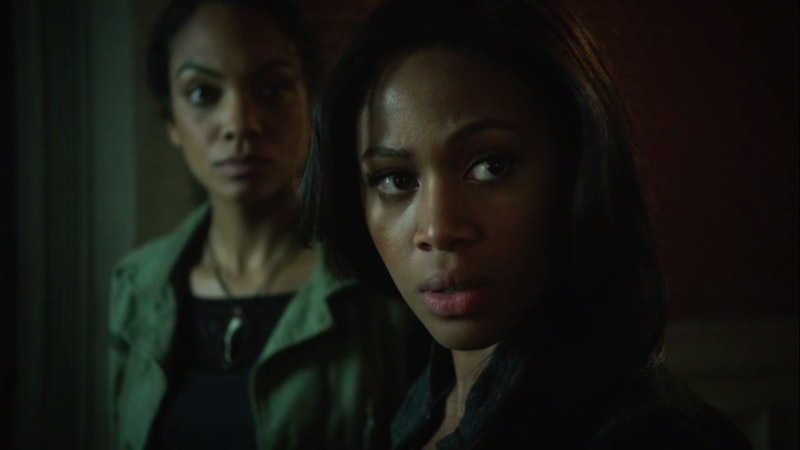 Sleepy Hollow's cases are getting creepier and creepier, but don't worry about it turning into a "case of the week" series because Monday night's Sleepy Hollow episode "Go Where I Send Thee" featured a frightening monster and curse that had a eerily similar storyline to Abbie and Jenny Mills' past. The episode followed Ichabod and Abbie as they raced to find a missing child of Abbie's previous case worker when she and Jenny were children. The case led them to the not-so-mythical Pied Piper, a man (though in this case it is a creature) who would lure children away from their homes never to return again.

The team find the monster (and Nick Hawley who is chasing the Pied Piper's bone flute) and the missing little girl and successfully return her to her parents. However, her mother is not nearly as excited and relieved as she should be. It turns out that the reason for her continued worry is because her family, The Lancasters, have had one child taken by the Piper every generation. And the only time a child was not taken, every child in the family died. Ichabbie realize that Mrs. Lancaster was sacrificing her daughter for the sake of her other children. When confronted by Abbie as to why she would be willing to do this to her child, Mrs. Lancaster asks Abbie if there is a part of her past she would be willing to forget. For Mrs. Lancaster, she had to endure her sister being taken by the Piper years ago and she could never forget that moment when she realized her sister had been sacrificed for her sake. Anyone see parallels between Abbie and Jenny?

As much as Jenny is completely determined to save the world from the coming apocalypse, she and Abbie led very different lives because Jenny told the truth and the other chose to forget what she saw when they were in the woods and encountered Moloch for the first time. Jenny was sent to the mental institution and never had the chance to be a successful, normal, functioning member of society. While Jenny lost that future, she was only focused on the mission at hand while Abbie got to have that life and was still chosen as a Witness with Ichabod, despite Jenny's consistent dedication to saving the world.

Jenny also recently sacrificed herself by getting arrested for the sake of the mission, so that Abbie and Ichabod could continue to perform their Witness duties for stopping the apocalypse while she was stuck in jail listening to Sheriff Reyes talk about how she didn't want Jenny to become her mother. It took Abbie 13 years to get Jenny out of the institution before, could Jenny's sacrifice a long time yet again? Here's where Mrs. Lancaster from Monday night's episode differs with our beloved Lieutenant Mills. Abbie realizes that her sister's life is too important to sacrifice, whether that means her prison sacrifice or sacrificing her life. In fact, it seems as though Abbie would be more willing to sacrifice herself to save Jenny, Ichabod and the ones she loves. Hopefully Jenny and Abbie's relationship won't be too rocky forever, these two women care for each other more than they realize. They just need to open up and tell each other the truth.