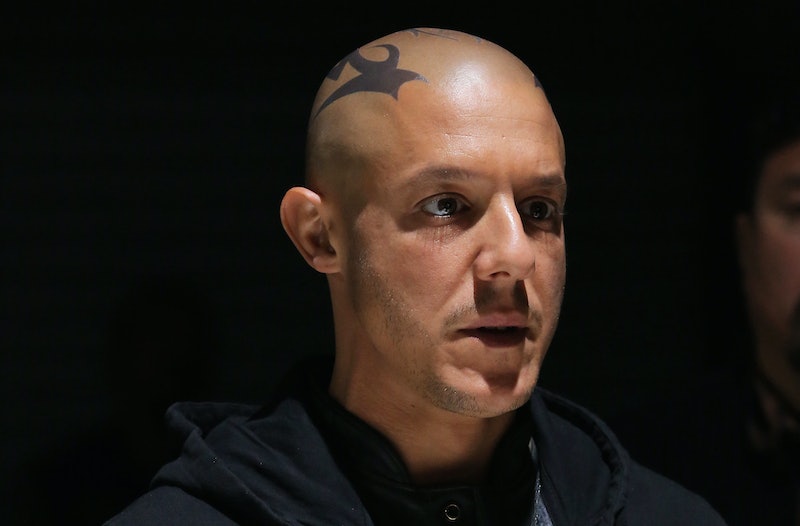 All season long, I have preemptively mourned the potential death of Sons of Anarchy's Juice Ortiz. But now he's gone and done it: he's burned his very last bridge. In the newest Sons of Anarchy episode "Smoke 'Em If You Got 'Em," Juice tries to trade Gemma's car and club secrets for safe passage to Mexico, but his get outta jail free attempt just throws him right into the club's clutches. And they're even more pissed than they were before. Of course, Juice has one move left and it's a big one: He could rat on benefactor and tell Jax that Gemma was the one who killed Tara and that this whole bloody, messy, never-ending war was started by Gemma's single, irresponsible lie. But would that really save Juice from death?

Let's think about this. If Juice were to use the Gemma card, he wouldn't offer it up in his last dying breath; he'd use it as a bargaining chip. And in order for Jax to allow Juice to bargain, he'd need to make a pretty compelling argument for his ability to speak freely before meeting Mr. Mayhem. Considering how well his family speech to frequent Juice sympathizer Chibs went, this just doesn't seem likely.

So, if Juice is denied his deal (which, let's face it, he will be), might he still let the cat out of the bag? Of course he will. Even if Juice is seconds from death, he will throw out the truth about Tara as a smoke bomb, hoping to distract the club from the matter at hand — killing him — and send Jax on a journey of rage, introspection, and violent outbursts. And while this whole situation might totally screw Gemma over, I don't think it could actually save Juice.

If Jax believes him (which is pretty slim, considering how blind Jax is to his mother's misdeeds these days), then Juice is still an accomplice to Gemma's crimes. He kept it a secret, he killed Eli to keep the secret safe, and now, he's been caught turning against the club once more. Truth coming out or not, Juice is still going to have to pay for all he did. It's not like him telling Jax the truth really helps the club gain anything: Jax has already ruined all of his relationships with his most dangerous rivals. He's at the point of no return. Knowing it was all for a lie won't make it better, it will just make Jax angrier. And an angry Jax is the opposite of a merciful Jax.

It may not happen right at the outset of next week's episode as this week's ending seemed to foreshadow, but there's no way Juice gets out of this alive.