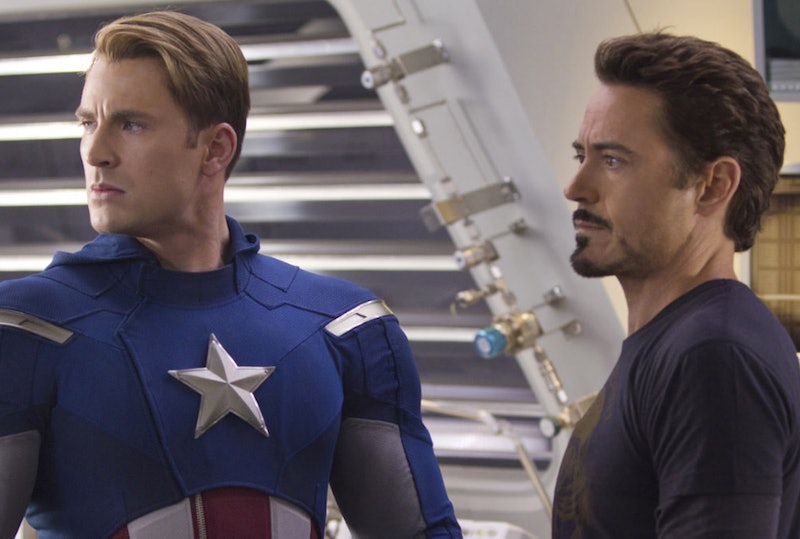 Is anyone else officially excited for Captain America 3 over any other Marvel movie coming up on their roster? Yes? No? It can't just be me. On Monday, it was announced that Robert Downey Jr. was joining Captain America 3 to reprise his role as Iron Man and everyone immediately knew what that meant. While the Thor and Iron Man film franchises have had independent storylines only mildly related to the larger Avengers arc, Captain America: The Winter Soldier proved that the Cap's films are all about shaking up the entire Marvel universe. And one of the biggest shake ups, one that starred both Captain America and Iron Man, was Marvel's Civil War arc from the comic books.

When the government proposes a Superhero Registration Act, longtime frenemies/best friends/partners Captain America and Iron Man find themselves on opposite sides as the Cap leads the band of superheroes who oppose the bill's restrictions on their civil liberties while Iron Man stands with the superheroes in support of the government and the good that the bill can do. While it would certainly be exciting to see such an epic storyline come to life on the big screen, is it a good idea for Marvel to devote Captain America 3 to Civil War? I mean, what about Bucky Barnes aka the Winter Soldier aka the whole focus on Captain America 2?

There are six good reasons that Captain America 3: Civil War should definitely be happening.

1. It's the only way to top The Winter Soldier.

The Winter Soldier was such a game changer that it will affect not only every Avengers movie that comes after it but also affected the Marvel's Agents of SHIELD television show. You can't return to your regularly scheduled bottle plots after that. People have high expectations from the Captain America films now and Civil War is the only way to meet them.

2. Captain America 2 was the perfect set up.

The Winter Soldier was all about what Captain America would do when faced with an ideological difference between himself and the government agency that he works for. And Steve Rogers promptly proved that he will choose truth and justice over following orders any day. Now that we know that, his side in the Civil War makes perfect sense and would be the natural follow-up to fighting SHIELD.

3. It's our only chance to see all the superheroes together.

Civil War is massive. Every single superhero in the Marvel universe is affected by the Superhero Registration Act and takes some side in the war. If all of the companies who hold the film rights to these characters can broker some kind of deal to work on Captain America 3 together, it would be a once in a lifetime opportunity to make the greatest superhero movie ever seen since, well, the first Avengers movie.

4. It opens the door for Bucky to get his own movie.

5. It generates a lot of plot for everyone, not just the Cap.

Like I said, Captain America isn't the only one affected by the Civil War arc. It would be a game changer that would give Marvel the fodder it needs to generate original plots for more Iron Man films, for more Thor films, and for films following any or all of the other superheroes who appear in Captain America 3. (Cough, Black Widow movie, cough.)

I mean, really, it's perfect. Tony Stark's entire character is all about learning that he can do the wrong thing even when he's convinced that he's doing the right thing. And the tension and competition between himself and Captain America was a key focal point in the Avengers. Not all those issues were resolved by Tony's sacrifice at the end of the movie. Civil War would be a great time to explore the emotional nuance of Tony and Tony's relationship with Steve.