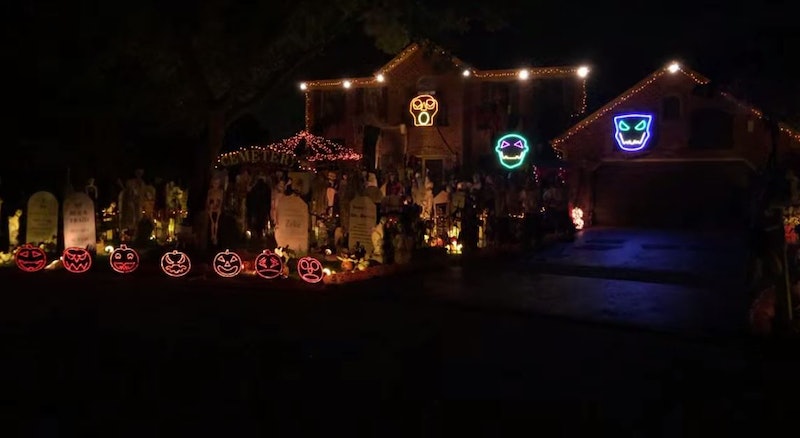 The most elaborate Halloween decorations at my house ever got growing up were a couple of carefully-carved jack-o-lanterns, some synthetic cobwebs, and a construction paper monster hung on the door (I made a new one every year). But even if your décor scheme one-upped mine, believe you me when I say that the Thomas Halloween House’s “Bohemian Rhapsody” light show definitely blows every other set of Halloween decorations way, way out of the water. Seriously, you guys. It’s just. That. Astonishing.

Every year, Naperville, Illinois friends Steve Jandick and Nick Thomas decorate the heck out of Thomas’ house at Halloween. They’ve been doing it for 15 years, but this year? Oh man. This year, it is truly an accomplishment. According to TODAY.com, Jandick grew up next door to Thomas; the first Thomas Halloween House display went up in 1999, and Jandick even came home around Halloween during his college years to continue the tradition. Thomas typically handles the decorations, while Jandick creates the light shows using Lightorama, a piece of software geared towards programming animated light shows.

And of course there’s a video — you can’t very well put something like this together and not film it, can you? You really have to watch it to experience it in all its glory, so scroll down to the bottom to see it; if, however, you really can’t take a few minutes to watch it right now, here are a few highlights:

Is This the Real Life? Is This Just Fantasy?

Taking its cues from the original “Bohemian Rhapsody” music video, the first section of the light show features four monster heads floating in a black void while they serenade us about their existential crises. The little green guy second from the left is our Freddie Mercury (Freddie Monstercury?), and as you might expect, anyway the wind blows doesn’t really matter to him.

But Now I’ve Gone and Thrown It All Away

Did you know they had a cast of thousands for this little beauty? Because they did, and here they all are. I would imagine that this would be creepy as hell if you just happened to walk by at the moment they emerged from the darkness, even with the dulcet tones of Freddie Monstercury opining to his mama.

I’d like to take this moment to note that Freddie’s jaw wobbles realistically with his vibrato. Now that’s dedication.

Why, yes — yes I will. Thank you so much for asking!

I assume the white orbs of light represent the lightning.

He’s Just a Poor Boy, From a Poor Family

Look! A new participant! I like to think it’s Jack Skellington popping in for a visit. He would get a kick out of Queen, wouldn’t he?

They’re definitely not letting him go.

So You Think You Can Stone Me and Spit In My Eye?

If that is the case, you are sadly mistaken. The pumpkins in the bottom left, by the way? They’re the ones representing the guitar solos. They rock harder than any pumpkins I have ever seen before in my life. Biggest. Halloween win. Ever.

Not only that, but “Bohemian Rhapsody” is just one of a whopping 30 songs Jandick and Thomas have created light shows for this year; others include “Poker Face” by Lady Gaga and Michael Jackson’s “Thriller” (natch). If you happen to live in the area, you can catch the show from dusk until 9:30 p.m. on weekdays and until 10:30 p.m. on weekends at Conan Doyle Rd., Naperville, IL. If, however, like me, you don’t live anywhere near Illinois, you can watch videos of most of the songs, as well as ones from previous years, at Jandick’s YouTube page.

Now if you’ll excuse me, I have some sad Halloween decorations I should really spend some time making… well, less sad. Way to light a fire under my arse, guys.