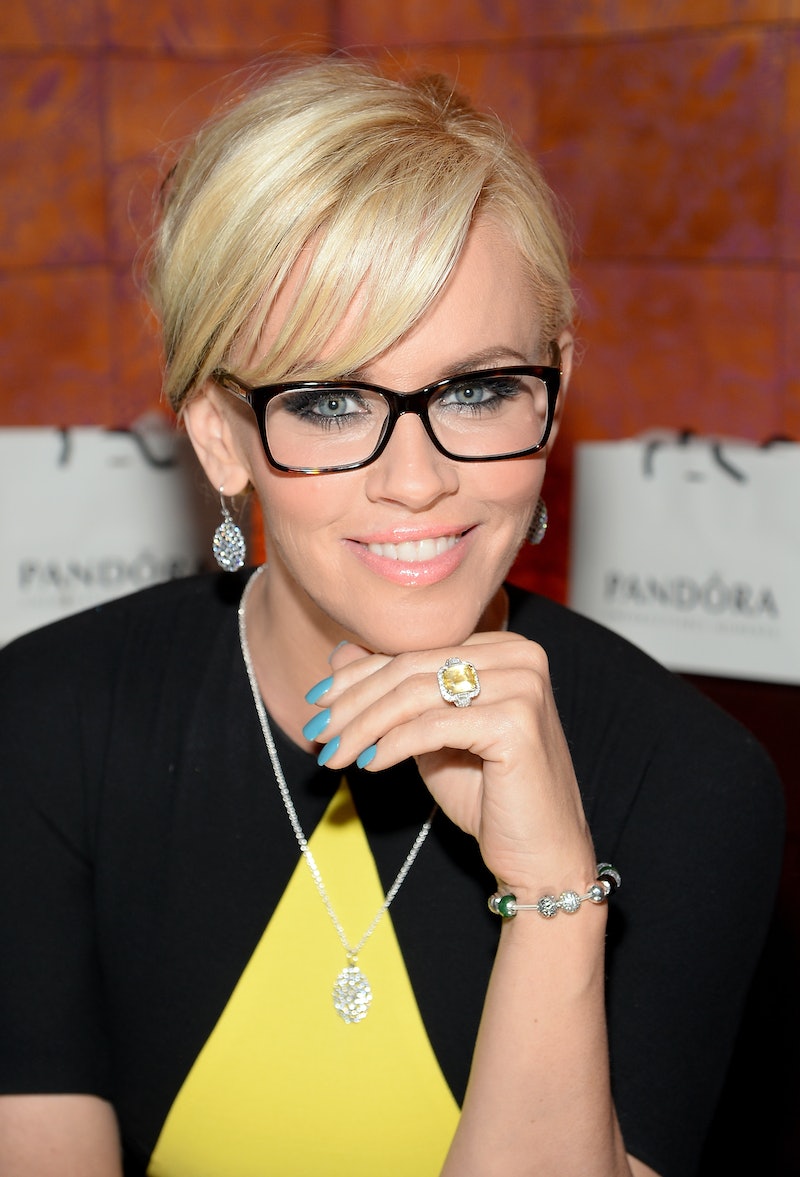 Friends, I come to you on the cusp of a discovery, one for which I have Kristen Stewart to thank. Over the weekend, Stewart said it was ridiculous not to be a feminist, but she did so after making some very thoughtful comments about why she thought people in her generation found the feminism word so scary. Jenny McCarthy is not in Stewart's generation, but bearing Stewart's speech in mind while evaluating her statements do put them in some perspective. However, I'm getting ahead of myself. Let's start with the fact that McCarthy doesn't identify as a feminist and go from there.

In an interview with Pride Source that infuriated me almost from start to finish, McCarthy shared a lot of views that I'll try to address one by one. First, Pride Source asked her if she was trying to make a feminist statement with her 1995 show Singled Out. McCarthy had been in the midst of discussing how the show was her attempt to break down the barriers placed around women that mistakenly classified them as incapable of being "raw" or hilarious, but despite that she was quick to deny that her breaking down barriers for women like herself had anything to do with that icky feminist word.

You know, I've never been one of those people [a feminist]. I just haven't. I feel like female and males should be adored and respected equally, but I'm not going to try and go and make some kind of statement.

I'm going to go ahead and be the one to say it. If you "feel like" females and males should be adored and respected equally, then you are a feminist. You are making a feminist statement. That is THE feminist statement. Strip feminism down to its bare bones, single sentence, absolute core and that is the irrefutable, integral, main part of the movement. Do you believe that men and woman are equal and should be treated as such? Great! You're a feminist. That's it. That's the whole thing. If you want to do or learn more, then please, I encourage you, go ahead, it would be wonderful, but just believing that men and women are equal and should be treated equally is your first step on the path I call FEMINISM.

Thus, it's a complete oxymoron for McCarthy to state the basic belief that feminism exposes at the beginning of her sentence and then complete that same sentence by denying that she's a feminist. She is literally saying "I have feminist beliefs, but I am not a feminist." And that makes no sense to me at all. It is, as Stewart said over the weekend, a ridiculous statement to make. However, perhaps McCarthy is looking upon feminists as angry bloggers (hiiii!) and man-haters and distancing herself from that rather than from the ideological movement itself. It's sad that she's not better educated about the f-word to not make that leap to conclusions, but it's more understandable than reading an interview in which she denies being a feminist while being a feminist.

Sadly, McCarthy's bizarre comments didn't end there. Did you know that she's always felt trans inside? No, she's not struggling with the incredibly difficult journey to find the best gender identity to define oneself that would bring one's soul in harmony with one's mind and eventually with one's body. She didn't go through any of that, apparently. McCarthy feels trans inside because she feels like one of the guys even as she's posing for Playboy. She opened up about this feeling while discussing her 2000 role as a transgender woman named Brandi on Just Shoot Me.

I feel like that inside. I always felt like one of the guys wearing, like, a Playboy bunny outfit. I was David Spade's buddy to begin with, so I was a natural fit, and I always felt like his brother. To play kind of the dude was almost too scary natural.

Um, no. I think what McCarthy doing when she says something like that is belittling the transgender community's struggle for tolerance, acceptance, and understanding from wider society. Being trans is about more than just "feeling like a guy" when you're not one. It's ten times more complicated than that and I, as a cisgender woman, would never claim to even begin to understand what a transgender person has to go through to find their true identity. Especially not based off the belief that I feel like one of the guys.

Add that to the fact that she later expresses joy over the idea of her son, Evan, being gay because, "We can shop! Do my hair!" and this interview was just not McCarthy's finest moment. It showed an ignorance not just about the feminism movement, but about the LGBT community. It reinforced stereotypes — that transgender people are people who just happen to think they're one gender when they're really another, that gay men like to shop and do hair, that feminists don't believe men and women are equals — that are harmful and damaging to each group that she is stereotyping. But McCarthy has learned to stand her ground and "stick with [her] truth" when it comes to negative backlash, so an apology for any or all of this is probably not forthcoming.

All of that aside, I don't feel anything more than disappointed in hearing another celebrity discredit the feminism movement like this, especially another female celebrity. I guess for every Taylor Swift, Emma Watson, Kristen Stewart, and Beyoncé, there's going to be a Lana Del Rey, Meghan Trainor, and Jenny McCarthy. Hopefully, like Swift, these women will experience a feminist awakening of their own very soon. And hopefully, McCarthy will stop stereotyping the LGBT community entirely.