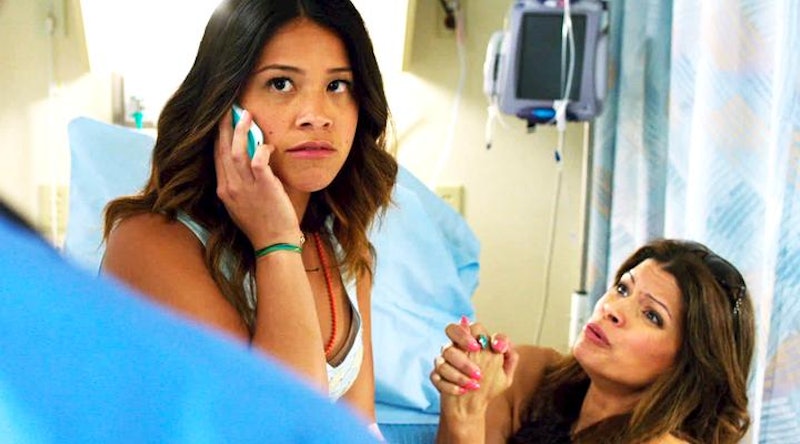 It looks like Jane the Virgin could be a very unlikely hit for The CW. According to preliminary ratings for last night's premiere episode, Jane the Virgin not only performed well in viewership, but it helped The CW manage to achieve their most-watched Monday night in about three years. (This is the point where I'd make some sort of joke about the show truly being a "miracle" or something, but that just seems overly cliché at this point.)

Jane the Virgin, which stars Gina Rodriguez as the titular character, follows a young girl — who is, as the title suggests, still a virgin — who is accidentally artificially inseminated thanks for a mix-up at her hospital. Adding to that drama, it turns out the father is a well-known hotel owner she had a crush on years before, Rafael...and Jane, on the other hand, is engaged to another dude. Oh, also, her absentee father stumbles back into the picture while all this is going on, and now that he's made it big time as a soap opera star, he wants to meet her. I know, I know: At first glance, it's a lot, but withhold your judgments and actually watch the pilot episode — surprisingly, it works (after all, a good telenova's never a bad thing...)

So, how exactly were the stellar ratings? According to the numbers, the episode garnered 1.63 million viewers, which is pretty great by The CW's standards — and that was also while it was up against The Big Bang Theory in the same timeslot on CBS. Totally a solid start.