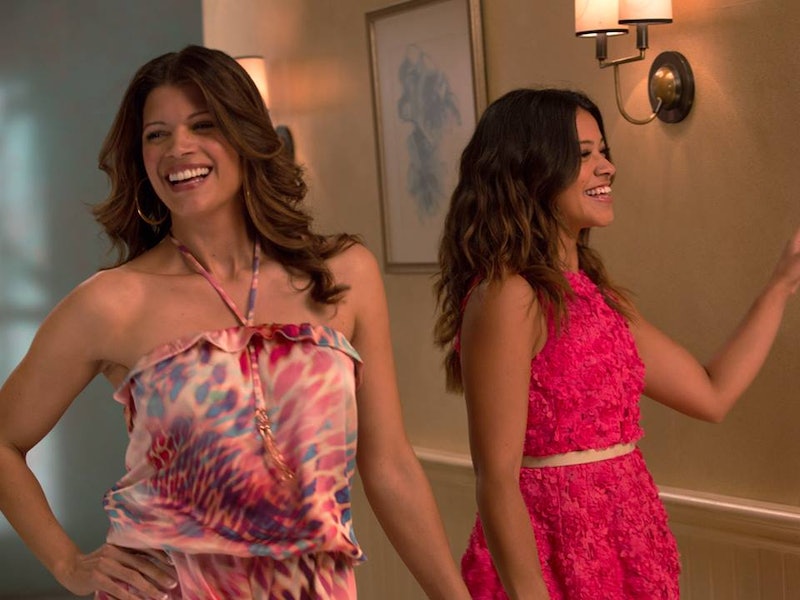 Prepare to hear a lot about Jane the Virgin in the next couple of days. The new CW show premieres Monday night and it's already achieving a lot of buzz. While almost everyone has heard by now that it's somewhat based on a Venezuelan telenovela called Juana la Virgen, the impact of that statement might not quite have sunk in yet. Jane the Virgin is far from the first remake of something, especially this year when so many films and television shows from our past are making a comeback. From Ghostbusters 3 to the television series based on Say Anything, Hollywood is making sure that our childhoods don't die by putting the things we used to love back on the big and small screens. However, the fact that another mainstream teen network like the CW is remaking a telenovela for the American audience is too important to ignore.

The CW's programs markets very heavily toward the teen demographic. Its current shows are famed for being supernatural in nature (The Vampire Diaries, The Originals, Supernatural, The 100, Star-Crossed, Beauty and the Beast), having one love triangle or more (The Vampire Diaries, Reign, Hart of Dixie, Arrow, The Flash), or just plain starring teen characters (The Vampire Diaries, Reign, Star-Crossed). About the only thing Jane the Virgin has in common with the other CW shows is the love triangle aspect, which, for those who know telenovelas, is kind of part of the package of that format. It's unique, which is alone enough of a reason to tune in.

But the best part of Jane the Virgin compared to the rest of the line up is the fact that it is shamelessly based on a Venezuelan telenovela and marketed as such. It has a cast that is made up of many people of color, in keeping with the country from which the original story was taken. It's a celebration of a culture remade for the American audience. Usually, when networks are looking for new stories to adapt or to bring back to the television screen, they look to formerly popular American shows or international shows (usually from England) that were popular in their home country and have crossover appeal. Juana la Virgen has been translated into many languages and taken to many countries, but this is the first time it's appearing on a mainstream American network.

When you look at the plot objectively, it's not hard to see why. It's absurd. A girl is artificially inseminated by accident during a routine check up? The biological father of her child just happens to be her old crush, who is now married? There's suspending your disbelief and then there's taking your disbelief out back to shoot it so you can enjoy the show. Jane the Virgin will force all of us to do the latter. The CW is taking a risk on this show that many other networks have tried to take before in adapting telenovelas of their own, such as ABC's Killer Women and Nickelodeon's Hollywood Heights which were both pulled from their networks. In the CW's case, however, I feel like it's a risk that's definitely going to pay off. Jane the Virgin might be 10 shades of ridiculous, but every new trailer and every new review reveals that they took the absurd and they grounded it in realism. They colored it with poignant emotion and an amazing cast. They made it accessible while hopefully not sacrificing anything that made the original show so enjoyable. And they didn't take themselves too seriously doing it.

Telenovelas are incredibly popular in Spanish speaking countries, but you will find more shows in America that are based on British shows than you'll find that are based on telenovelas. ABC has had Ugly Betty, ABC Family has had Chasing Life, and Lifetime has had Devious Maids, but this is the first time that the CW is dipping into that rich pool of stories that too often get sidelined in favor of more mainstream programs with predominantly white casts. If Jane the Virgin is a hit, then we might be seeing more tales based on telenovelas, and thus more casts that give Latina actors and actresses the spotlight, on this network and on others. And that would be truly amazing to see.