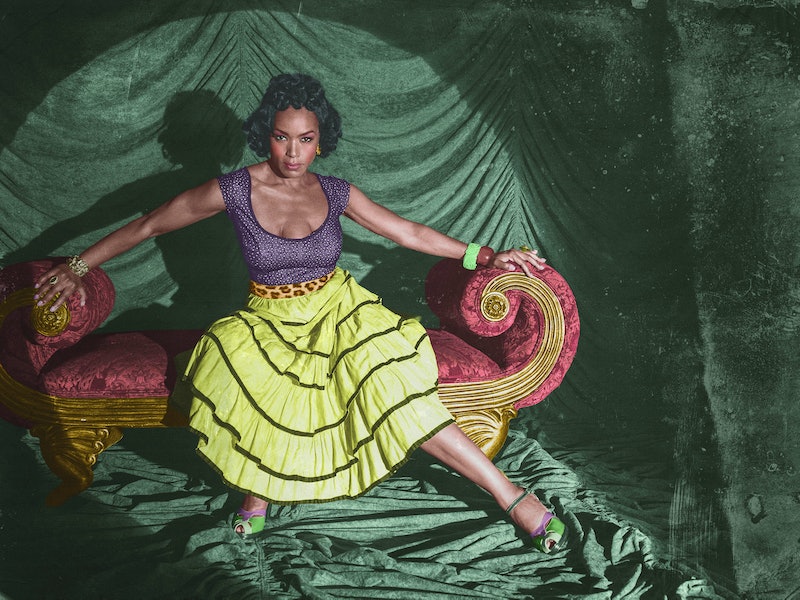 "You can never have too much of a good thing." It's a saying we've all heard countless times, but one that Angela Bassett's three-breasted woman on AHS: Freak Show takes to a whole different level. Wednesday night's "Massacres and Matinees" episode introduced viewers to two more additions to Elsa's sideshow: Michael Chiklis' strong man Dell Toledo and Bassett's multi-breasted Desiree Dupree, who were desperately seeking employment. As a way to fully prove their worth to Elsa, Bassett calls herself a "full-blown" hermaphrodite while exposing the top portion of her body in all its three-breasted glory.

"Three titties, proper girl parts, and a ding-a-ling. I'm a full-blown hermaphrodite. Put that on your banner," Desiree confidently quips to Jessica Lange in what has to go down in AHS history as being the most memorable introduction of all time. But what exactly does Bassett mean when she refers to herself as a "hermaphrodite"? And shouldn't a Ryan Murphy production be using a less-offensive word?

It's a word many people think can be used interchangeably to describe someone with an intersex condition, but in actuality the two terms mean completely different things and according to the Intersex Society of North America (ISNA), "The words 'hermaphrodite' and 'pseudo-hermaphrodite' are stigmatizing and misleading words."

For starters, intersex people actually exist. And while there are many different types of conditions, the basic premise is that someone is born with genitalia that doesn't adhere to typical definition of male or female genitalia. Per the ISNA:

A "hermaphrodite," on the other hand, is not a term we can use for humans, as it refers to an organism with a complete set of both male and female reproductive organs. This is a topic covered in mythology and a gender makeup found in some animals and insects, but for humans, it is physiologically impossible.

But, of course, this is American Horror Story that we're talking about, so giving Bassett's character an impossible set of genitalia is pretty much par for the course at this point. (Remember Coven's minotaur?) Nothing is off limits.

It does seem, however, that a word like "hermaphrodite," which is not by any means PC when referring to another human being, made it onto the show. But when we think about the fact that the series takes place in the '50s, when name-calling was the norm for folks were any shade of different, it makes sense that the writers chose to have Basset's character self-identify that way. After all, she needs to sell her brand in the freak show community and the folks who attended freak shows weren't looking to be politically correct — at least not in AHS' Jupiter.

Let's just all do ourselves a favor and avoid following AHS' time period-based and pretty offensive example.