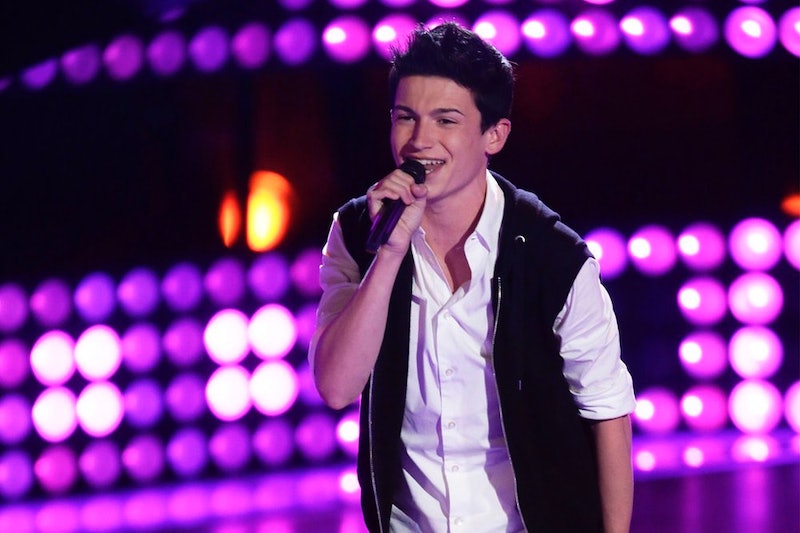 Is this what true heartbreak feels like? Because I felt physical pain when Joe Kirk lost his The Voice battle round to Alessandra Castronovo. And it only got worse when none of the judges chose to steal him, even after they all sung the praises of his talent and emotion. What gives, The Voice judges, can you not see a potentially great thing when it's staring you right in the face? There were two huge things I didn't agree with in this battle — Adam's choice of song and the reason why he chose Alessandra and let Joe walk. But the pain didn't start until the floodgates opened up and Joe cried tears of defeat while Pharrell comforted him. Wasn't he supposed to be "like a little brother," Adam? WHERE WERE YOU WHEN HE NEEDED YOU?

Tonight wasn't a good night for Team Adam members — mostly because Adam Levine seemed to have picked some of the lamest songs ever for his team. Joe and Alessandra's battle was tough to call because Adam chose Rihanna's 2012 hit, "Stay," for their head-to-head competition. And, no offense to Rihanna, but this song, while emotionally challenging, is kind of "blah." It also tipped the scales in Alessandra's favor, apparently. Which brings me to my second big issue with Joe and Alessandra's battle.

Adam chose Alessandra over Joe because she had a "diva" quality. WHAT DOES THAT EVEN MEAN? And how does having that trump having an essentially perfect performance like Blake lauded Joe for? It just makes no sense — Alessandra was good, but she didn't really do anything of her own with this song. Which just made it that much harder for me to blink back tears when I saw Joe walk offstage crying.

Everything about the "Stay" battle broke my heart, but nothing more so than when Joe choked out, through major tears, that he "wanted this so badly" while Pharrell comforted him. He doesn't need a pep talk, Pharrell, he needed you to step up and steal him because Joe shouldn't have gone home tonight. Also, I really hope Adam Levine doesn't actually have any real little brothers, because he's really not good at the whole "sibling compassion" thing.