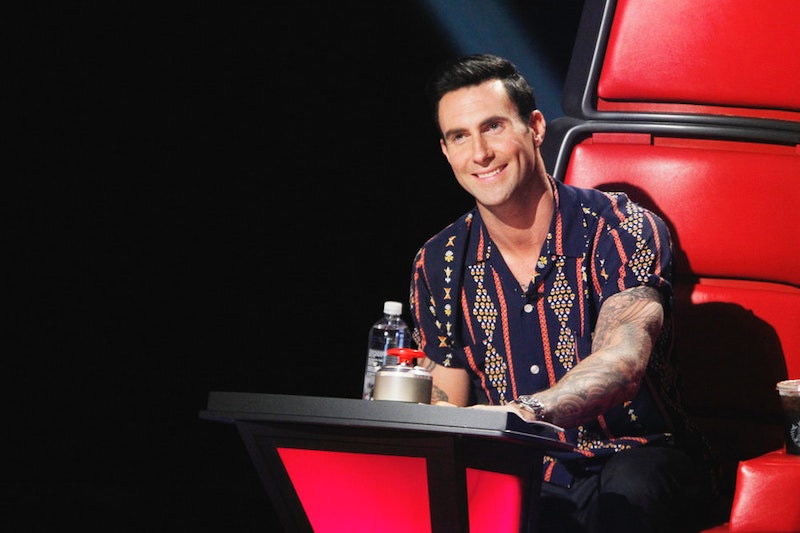 Let the battle rounds begin, people. The Voice Season 7 blind auditions are finally over and after a lot of verbal sparring between Adam and Blake and Gwen giving out sparkly "Team Gwen" tees, here we are with the real competition about to begin. Let me just say that, personally, I believe that Adam Levine might have the team to beat in this competition — even though fellow judges Gwen Stefani, Blake Shelton, and Pharrell have assembled potentially winning teams. But where they all have clear, cohesive elements to the singers that chose them, Adam's contestants are all over the map and that makes them even more dangerous. Basically, Blake shouldn't be clearing a spot for his fifth winner's trophy just yet — I mean, Adam snagged Cracker Barrel-loving heartthrob Jonathan Wyndham, after all.

Team Adam is a perfect mix of young and old powerhouse contestants that hit all of the categories from Pop to R&B to Indie Rock. Which absolutely proves he's got his mind set on a win and should be leaving Gwen, Pharrell, and Blake shaking in their boots. Adam snatched up Clara Hong, the teenager with an incredible belt, and had the vision to turn his chair for Matt McAndrew, the bespectacled, tattooed, shaggy haired version Adam himself, with his unique indie style. Team Adam is stacked and beyond ready to take on Team Gwen's wildly talented female-centric team as well as Blake's and Pharell's in Season 7.So, while it pains me to do this because Team Adam is full of talented, potential superstars that are definitely capable to win The Voice, here are the Maroon 5 frontman's 12 singers ranked in order of 1 to Blake Shelton's ecstatic "oh em gee!"

It pains me to rank Mia so low, because her belt was pretty amazing. But her rendition of Katy Perry's "Unconditionally" kind of lacked perfect annunciation and she really didn't do much to enhance the song. She has potential, Adam will just have to find the perfect way for her to showcase it.

I didn't love Alessandra Castronovo's song choice, "When Love Takes Over," but I can't help but agree with Adam that she's got power. And a lot of it. Which makes her someone to watch in Season 7, especially when Adam sets her up with more suitable songs.

Rebekah Samarin's rendition of "Case of You" was good enough for Adam to fight Gwen to get her on his team, but he admitted that, while her talent was obviously there, she could use some work. I'm not generally optimistic about singers that "need work" to win the competition, but Adam seems to think she's a shiny sports car, so that put her at #11 on this list.

I'm going to just say straight-up that Joe Kirk is freaking adorable. I want to pick him up and put him in my pocket so he could sing "Lego House" to me all day with that perfect diction.

Sing John Mayer, win hearts everywhere. The musical-theatre-kid-turned-singer, Jamison, surprised the judges with his voice and actually made Mayer's "Gravity" sound even better — a tall order in my book.

Clara Hong's performance was incredible, prompting Gwen to gush over how beautiful her voice was. And I completely agree. Team Adam has a handful of talented ladies, some that need more work than others, but I can't think of anything Adam should do to change Clara Hong's sound. She's angelic.

I got a John-Legend-at-a-higher-pitch vibe from Ethan Butler's performance and there's absolutely nothing wrong with that. He's a swoon-worthy contestant that's absolutely won some fans for Team Adam and, I mean, having a John Legend vibe can only help you get incredibly far with voters.

Damien's performance was an emotional powerhouse with the voice strength to match. All four judges loved Damien — even Blake who was reluctant to turn for him — so, of course he's in my Top 5 potential winners list.

OK, Matt McAndrew had me sold from the minute he started singing "A Thousand Years" because I'm a diehard Twilight fan and this song took me right back. And he won Adam over as well when the Maroon 5 singer turned his chair around early in McAndrew's performance.

Spanger was another four chair-turner during the blind auditions with her performance of "Best Thing I Never Had" and for good reason. She was in control, she had attitude, and her voice was insane. All things that landed her on Team Adam at in the #2 spot on this list.

I said this the night Jonathan Wyndham performed "Say Something" and got all four judges to turn around and fight over his Superman-like looks and the soul in his voice. Wyndham is a contestant to beat in this competition and he absolutely won Team Adam a whole new legion of fans. Heck, he got Blake Shelton to squeal "OH EM GEE" like a teenage girl. That's something and that's why Wyndham is up high on this list.