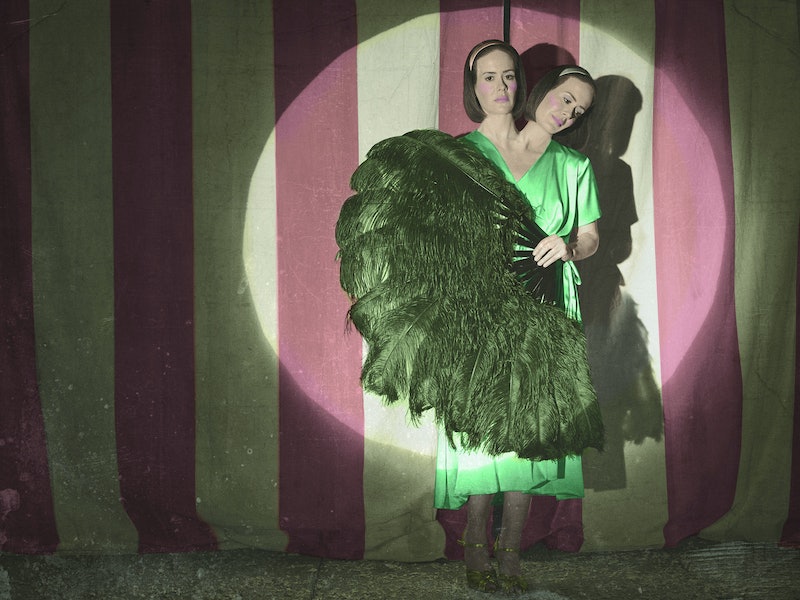 Ever since the first episode of American Horror Story: Freak Show we have all been wondering one thing: What happens when one conjoined twin murders someone? Are they both punished? In case you missed it, I don’t know why you still haven’t watched the Freak Show premiere yet, Sarah Paulson plays Bette and Dot who are conjoined twins. Bette, who is somehow considered the nice twin, murders their mother in a fit of rage because she wouldn’t allow them to leave the house. Now, the cops are after them for the murder obviously, but technically Dot had nothing to do with it because she even tried to stab Bette, which is seemingly stupid because they share a body, even if she only controls half.

So, what can we expect from this next episode? People are going to attempt to lock them up for the murder. Why wouldn’t they? It’s 1950 and people aren’t about to be nice to a conjoined twin even if they were the sweetest people alive. One thing I can’t get out of my mind though is the fact that Dot literally didn’t have anything to do with the murder. Bette took control and stabbed the mom. Although there has never been a case of a conjoined twin murder, Nick Kam, a California State Bar and graduate of the University of San Francisco School of Law wrote a piece about the exact situation, examining all the possible outcomes. His conclusion?

I believe that within our Constitutional framework, the only thing to be done in this situation is to release the conjoined twins. Even if the jury sentenced the conjoined twins to death, the court would have to commute the sentence and release the twins. The guarantees of due process under the Fifth and Fourteenth Amendments prohibit punishing an innocent actor.

However, this is supposing that one twin controls one side of the body, while the other twin controls the other side. They are considered separate individuals with two separate thoughts and distinct separate personalities. Obviously, many people get away with murder, so Kam says that first the twin who committed the murder needs to be found guilty before they come to a punishment.

Kam quickly rules out the death penalty. There is no way to kill one twin without killing the innocent. He then rules out separation, because there is a very low success rate in separation surgery. He also rules out life without parole because of the fact that it includes jailing an innocent person. Kam also considers a monetary sanction where the innocent life would be given compensation for their life, although they obviously wouldn't be able to take that money.

He asks the important question: “Which do we hold higher, the punishment of an innocent life or freeing a guilty one?”

There has been one case like this in the past according to Kam: In the 17th century a conjoined twin stabbed a man to death and was tried and convicted of murder, then sentenced to death. His conjoined twin was mute, deaf, and blind. Historians did not record whether they released the twins because of the innocent party attached or if the twins were incarcerated for one twin's crime. Thanks for nothing, history.

With no legal precedent, however, it is conceivable that in AHS: Freak Show's intolerant small town in Florida, Dot could very well suffer the consequences of her sister's misdeeds. Even if she's completely innocent and the concept seems completely wrong.