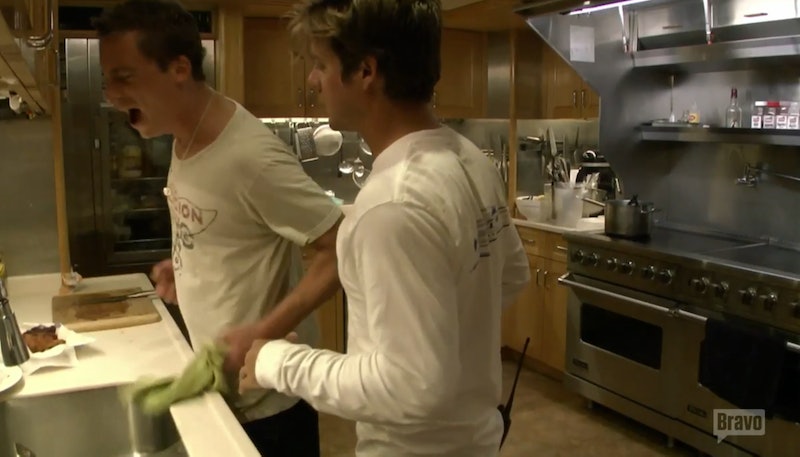 Holy Ohana, that was quite a charter. Tuesday night's episode of Below Deck introduced us to Primary Charter Guest Timothy, and I will cherish the charter we shared always. Oh, Primary Charter Guest Timothy. That cutting the stack of cash in half move? So beautiful. What a bag of reality TV gold you were! Primary Charter Guest Timothy was like Liam Neeson's character from Taken, but instead of a very particular set of skills, Timothy had a very particular set of requests. (On second thought, Timothy seemed to have a very particular set of skills, too. Said skills seem to rake in a lot of money, attract a devoted following, et cetera. What those skills are, exactly, I couldn't tell you. He works with the stock market or something. I zoned out any time I heard the word "stock." I am who I am.) There was one particular request I could not write down fast enough: SEA CUCUMBER OVARIES. Alas, according to his Bravo blog, Chef Ben didn't have any sea cucumber ovaries on hand .

For shame, CHEF BEN. What sort of self-respecting chef, nay, human doesn't keep a container of sea cucumber ovaries on hand at all times? As a matter of fact, there are two jars in my pantry as I type this! You never know when a friend is going to have a hankering for the ovary of a sea cuke.

OCTOBER FOOLS'! I sure as shark fin did not know sea cucumber ovaries were a thing people ate until Primary Charter Guest Timothy asked for them. I had some questions. Food blog TOMOSTYLE has some answers:

Sea cucumber ovaries, which are called konoko or kuchiko in Japanese, are even more of a rare delicacy than the intestines because only a minute amount can be extracted per animal. A dried version called hoshiko that I brought to Chef Namba was simply heated for a few seconds over an open flame and torn into bite sized pieces. These small pieces are meant to be chewed slowly for as long as possible to extract its intense brininess and release its ocean aromas all throughout the palate.