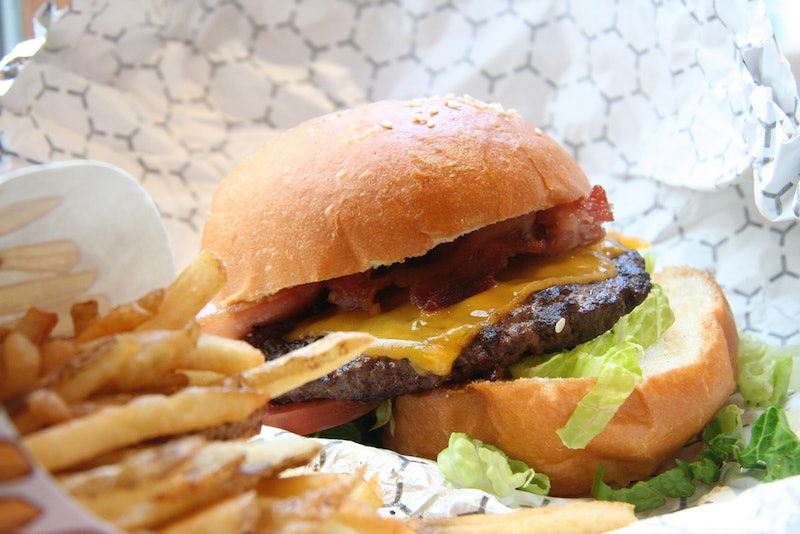 Innovation is one thing — but in the great battle of fast food, it all comes down to one thing, and one thing only: Which fast-food chain has the best burger and fries? According to Forbes, a recent poll of adults in the U.S. revealed who comes out on top. Not going to lie: The answers are kind of surprising. Tied for first place, we have… drumroll, please… Five Guys! And… Burger King?

Five Guys has been taking the country on by storm in recent years; originally limited to just five locations in the Washington, D.C., metro area, it began franchising in 2003. As of 2012, they’ve had over 1,000 locations open throughout the U.S. and Canada, with an additional 1,500 in development. It's also the fastest-growing fast food chain in America, with its sales jumping 32.8 percent from 2010 to 2011. Also, it doesn’t skimp on anything — and it doesn't generally nickel and dime you, either. Its business practices have perhaps done more to appear more endearing to the public than its actual food — but hey, the burgers are good too, so I’m not complaining.

Burger King, however, is a little bit of a mystery. Granted, it’s been ages since I’ve actually eaten at one — but I was honestly not aware that people were as into it as they appear to be. I would have assumed that McDonald’s would have been more popular, but apparently I was wrong (maybe it's because of this?). Where the House of the Golden Arches does win, however, is in the fries arena. At 34 percent, McD's stands head and shoulders above everyone else.

Bad news for fans of In-n-Out, though; it straggled in at fourth place in the burger race. But although Foodbeast’s Isai Rocha thinks it’s “mind-boggling” that Burger King would win out over In-n-Out, it’s not actually that surprising — mostly because the majority of the U.S. doesn’t have access to its fare. According to In-n-Out’s website, there are only 301 In-n-Out locations in the country, most of which are located in California. Guess how many locations Burger King has? 13,667, as of the end of 2013, roughly 7,380 (54 percent) of which are in the U.S. Rocha is correct when he chalks the results up to East Coast bias — but to be fair, we can’t judge what we’ve never tasted, and far more of us have eaten Burger King than we have In-n-Out.

Check out the neat-o infographic created by Statista below for all the details. What do you think? Do you agree? Disagree? Are you horribly offended and have vowed forever to boycott any but your most favorite of burger places? Or do you just not give a damn, because for Pete’s sake, it’s just a burger?

You will find more statistics at Statista