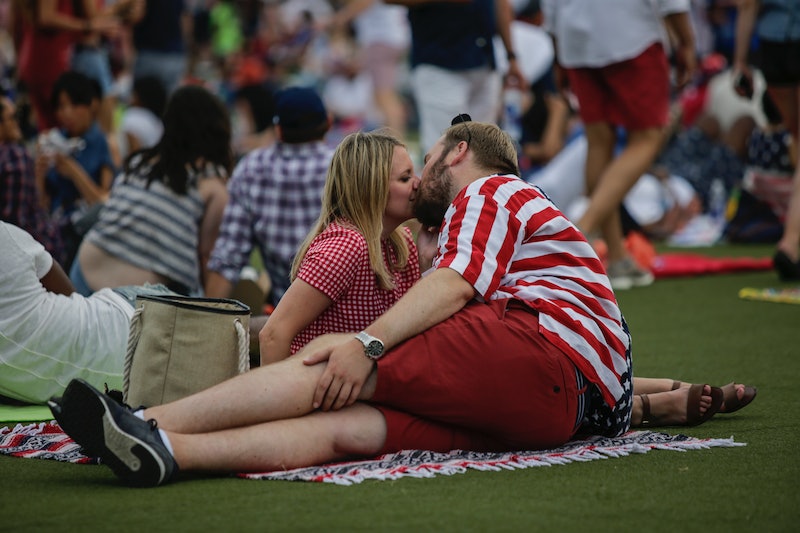 I’m almost two years into my relationship with my current partner. In that time we’ve gone from passionate, infatuated lovers, to a cooled-off version of what we were in that first year. It’s not that we’ve lost interest in each other, but our relationship has evolved into more of a partnership, than one of fiery, hot desire and lust.

I can’t say that I don’t miss those days — the ones where I physically, emotionally, and mentally could not get enough of him — because I truly do. But I can also say that to be here, in this place of security and mutual attachment, is a good place to be. It feels like home.

Sadly, infatuation is a short-lived but necessary step in getting to the final stage of love, or as biological anthropologist Helen Fisher, calls it, “Life’s greatest prize.” To be in love is, by all accounts, the “most addictive substance on earth,” and one that nearly everyone, no matter their age, gender, race, or sexual orientation craves.

Researchers have yet to find a society in which love doesn’t exist. As Fisher notes, “Anthropologists have found evidence of romantic love in 170 societies.” And, although each love is different from the next, it still takes the same evolutionary path from lust to attachment. It’s also arguably entirely chemical.

There is a definite shift that happens when a relationship goes from infatuation to attachment. Even if you’re only aware of it after the fact, it’s still taking place and can’t be stopped.

Here, we walk you through the stages of your brain goes through, from infatuation to attachment. This is your brain on love.

When you’re in infatuated, the chemicals in your brain are in overdrive. Scientists have even compared the serotonin levels in one’s brain at this stage as being on par with obsessive-compulsive disorder. (Yes, that’s why you’re so obsessed.) Because of the brain pathways and structures that are active during this time, falling in love has also been compared to being high on cocaine. (Which might explain why it can be so addictive.)

While serotonin and norepinephrine play an important role in the early states of attraction and infatuation, the chemical that’s really doing the heavy lifting is dopamine. Through the use of brain scans, Fisher and other scientists have found that dopamine starts in the middle of brain and stretches outward attaching itself to the basal ganglia part of the brain, the home of cognition and emotion, and revs things up. It results in “euphoria, sleeplessness, loss of appetite, and a rush of motivation." Or, as it’s commonly referred to, infatuation.

“Between approximately 18 months and three years” is pretty much all you have of your infatuation stage, according to psychologist Dorothy Tennov. If your infatuation for your partner extends past this, it could be indicative of problems in the relationship. Deep insecurity in the relationship can extend the feeling of being infatuated and ultimately delay reaching the attachment stage. It might seem great that you’re still overly obsessed with your partner five years into your relationship, but at that point, it might be worth exploring why that is.

Or as relationship writer Susan Piver put it in a piece for Bustle:

When a relationship begins, it is a love affair. Fascination, joy, sex, inspiration, delight, and sex, sex, sex. At some point, however, this phase ends. (I’m sorry, it just does. It may take a few months or a decade, but it does.) I’m not saying that longterm relationships can’t be romantic and sexy, but eventually, that beginning phase must end. That is why it is called the “beginning.”

...If love affairs are about talking, having adventures, and making love, then relationships are about creating a household, meeting each other’s friends, and figuring out how much debt everyone has.

Step 3: THE SHIFT FROM INFATUATION TO ATTACHMENT

Enter the oxytocin and vasopressin.

These two chemicals are the ones we can thank for that strong feeling of attachment that comes when things have cooled off, but you still know, for a fact, that you can't live without this person.

Both chemicals are also what's released into our bodies after an orgasm, and they force us to feel a deep devotion and longing to be with that person for the long haul. This state, Fisher explains, "is characterized by feelings of calm, security, social comfort, and emotional union."

It is essentially what fuels our desire for procreation. Why this is can't fully be explained, but through brain scans of people in varying stages of love, the chemicals at work are very visible. As with infatuation before it, you are, at this point, at the whim of your brain, and no matter how hard you try, you are not in total control.

From the day we come into the world, oxytocin and vasopressin are essential neurotransmitters in forming the bonds between a mother and child. So if you think about it, it only makes sense that it would be the end result of a romantic relationship. If love truly is, "life greatest prize," then you know you've received it when your feelings of attachment have set in and the dependency on that person is no longer scary, but just fact.

More like this
12 Aphrodisiac Desserts To Spice Up Your Valentine’s Day
By Kaitlyn Wylde
My Partner Wants Me To Wear A Diaper During Sex. Help!
By Sophia Benoit
12 Anti-Valentine’s Day Memes For People Who Are So Over Romance
By Meghan Bassett
18 Hinge Prompt Answers To Try If You’re Looking For Something Casual
By Lexi Inks
Get Even More From Bustle — Sign Up For The Newsletter
From hair trends to relationship advice, our daily newsletter has everything you need to sound like a person who’s on TikTok, even if you aren’t.