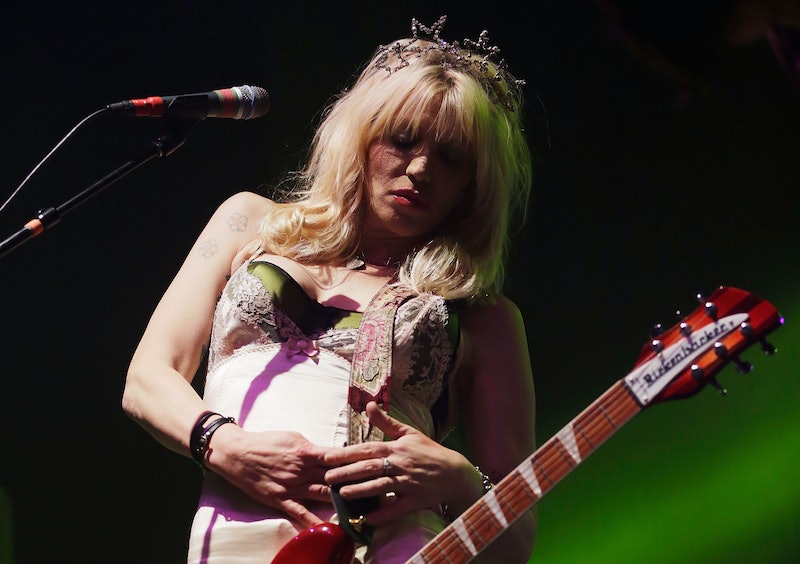 She's at it again, resurrecting the ghosts of '90s past. In between her stint on Sons of Anarchy and an upcoming part in an experimental opera, Courtney Love has claimed that Billy Corgan has stopped writing hits after he stopped writing about her. She noted in particular that many songs of The Smashing Pumpkins album Siamese Dream were about her, including hits such as "Bodies" and "Today." She also, according to her, made it onto the 1995 masterpiece Mellon Collie and the Infinite Sadness, stating that "Where Boys Fear to Tread" is about Corgan's jealousy of a tryst between Love and Trent Reznor.

It may be true. It may not. To be honest, I hope to god it is, that's my favorite Smashing Pumpkins song, and I would love it to be about the drama between a Corgan-Love-Reznor sandwich. And besides, it wouldn't be the first time someone's written a song about her. And I'm not even talking about the obvious ones, Whats-his-face Cobain and friends. When you're a force as fierce as Love, one that practically embodies rock and roll, you're sure to influence someone.

While I adore her with every ounce of my soul — and there are millions of articles confirming this — I can't say the same for everyone else. In any case, for better or for worse, she's definitely been the inspiration behind more than a few tunes. Take these, for example.

"I'll Stick Around" by The Foo Fighters

It's no secret that there's been mad drama between Love and Dave Grohl for years now, it's a feud that's pained me to watch, since I love them both dearly. On Grohl's end, one of the most scathing insults comes in the form of 1995's "I'll Stick Around," which includes the lines "I'm the only one who sees/your rehearsed insanity." Rough.

Grohl didn't confirm that it was a Love-inspired track until 2009, when he told his biographer Paul Brannigan, "I don't think it's any secret that 'I'll Stick Around' is about Courtney."

"Bruise Violet" by Babes in Toyland

Kat Bjelland, Babes in Toyland's frontwoman, and Love have been best frenemies long before such a term existed. Both have been early perpetrators of the kinderwhore style, and there's been endless debate over who wore which peter pan collar dress first. It's all very eighth grade.

In any case, Bjelland's denied that "Bruise Violet" is about Love, instead stating that Violet was the name of a mutual muse of the pair. The music video, which features Cindy Sherman as a Bjelland doppelgänger, doesn't completely eliminate the possibility that it's also about their battle of who-copied-who.

There are two articles I remember from Seventeen magazine. The first one was about rainbow parties (which, actually, is the only article ANYONE remembers from Seventeen). The second one was a profile on Courtney Love, in which she asserts, "Being famous is just like being in high school. But I'm not interested in being the cheerleader. I'm not interested in being Gwen Stefani. She's the cheerleader, and I'm out in the smoker shed." Them's fighting words.

So Stefani took that line and turned it into the 2005 hit "Hollaback Girl," in which she was the loudest cheerleader on earth. At the time it was a sassy move, although witnessing this now and remembering the whole Harajuku Girl schtick, I'm recalling that 2005 was a dark time for music.

"Sad and Damned" by The Nymphs

Much like "Bruise Violet," there's nothing definitive that confirms this is a Courtney Love influenced song, though the music video definitely suggests someone's taking some swings at her. Further evidence: lead singer of The Nymphs Inger Lorre is sampled on Hole's "Sassy," in which tells Love her reputation is shit in this town.

I think Love got the last laugh here, because this is probably the first and last time you'll ever hear of The Nymphs.

This is may be the most obvious song written about Love, penned by her husband the late, great Kurt Cobain. It makes obvious reference to their courtship, in which Love gifted him a heart-shaped box filled with little trinkets. Or, as Love told Lana Del Rey recently on Twitter, it's about her vagina. One or the other.

I'm not going to even touch the censored name of "Starsuckers Inc," because it bums me out, but anyway. We touched upon the fact that Love and Reznor had a thing back in the '90s. While nothing directly says that this is about Love — and it definitely targets the entire '90s alternative scene, NIN and Marilyn Manson included — there's a cameo at 2:28 that seems to be a gruesome parody of her.

Truth be told, Reznor was still probably angry for the time Love told SPIN magazine, "Don't call your band Nine Inch Nails if you have a three inch one." Which is a beautiful quote, and one day I plan to get it embroidered on a throw pillow.