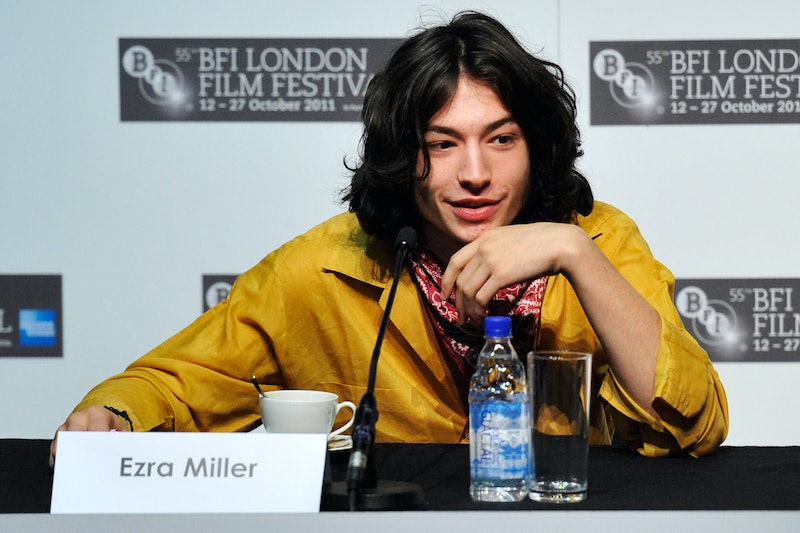 Please join me in taking a moment to get to my feet and give DC a massive round of applause. On Wednesday, Warner Bros. released the superhero movies that are on their future line-up and, well. Look, I am a massive fan of Marvel's superhero movies. I will tell anyone that Marvel is killing its competitors at the box office like never before. I was laughing at the other studios, like Sony, like Warner Bros., and daring them to bring it to have even a chance of catching up to Marvel's Avengers film franchise. Then DC brought it. How? They have Ezra Miller set to star in The Flash , a film that will be released in 2018, making him the first out LGBT actor to star as a major superhero in a feature film.

Miller is better known to most in the audience as Kevin Khatchadourian from We Need to Talk About Kevin or as Patrick in Perks of a Wallflower. In 2012, he did an interview with Out during which Miller identified as queer, stating, "I’m queer. I have a lot of really wonderful friends who are of very different sexes and genders. I am very much in love with no one in particular." Now two years later, it's been announced that he'll not only be playing the Flash in the DC movie universe but he will also be starring in his own feature film set to be released after Warner Bros.' Wonder Woman movie. I repeat: DC and Warner Bros. have a female suprhero movie coming out and a superhero movie starring an out LGBT actor. What exactly has Marvel done for representation in movies lately?

You, like me, might have thought that if anyone was going to play the Flash in the next DC Comics movie then it should have been Grant Gustin. Gustin plays the titular superhero on the show of the same name currently airing on the CW as a spin-off to Arrow. However, I am not going to complain about Warner Bros. deciding to give the role to a queer actor instead. Representation in Hollywood films is an ongoing battle that we never seem to stop fighting and Miller himself seemed aware of that when he went public with his sexuality. In a 2012 interview with the Los Angeles Times , Miller was quoted as saying:

I'm hoping to avoid labels; they're sticky. And I can certainly still shoot a gun probably better than a bunch of the straight actors around. I wouldn't want to lose out on my macho action movie just because I told people I was queer. That would be a damn shame.

He might not get much opportunity to shoot any guns in The Flash, but I think he might be willing to settle for being the fastest man alive. As weird as it feels to be handing out congratulations to film companies and franchises for the simple decency of giving representation to people from more diverse backgrounds than simply "straight, white male leads", DC really earned their kudos with this move. I haven't been this excited for a DC Comics movie since The Dark Knight.