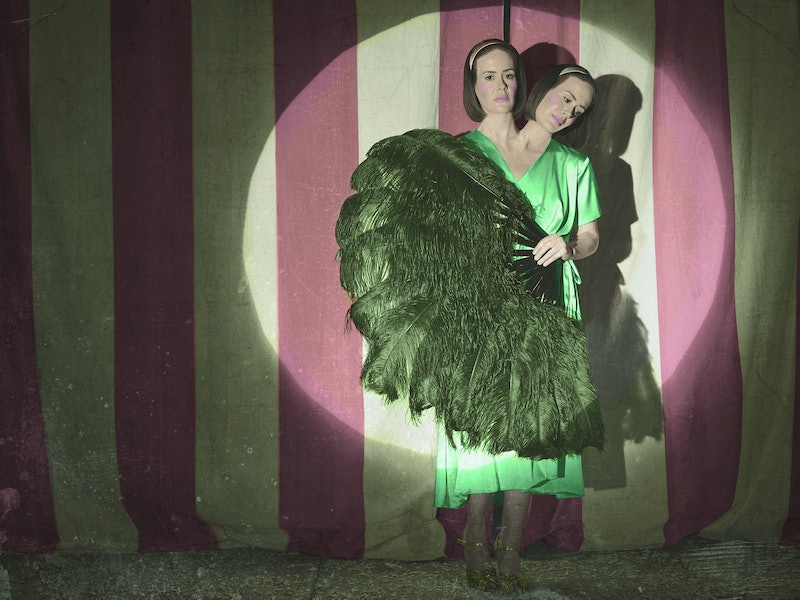 What do you do when you find yourself jealous of your conjoined twin? Plot to murder them, of course! Wednesday night’s American Horror Story: Freak Show took the idea of sibling rivalry to a whole new level when Elsa advised Bette to basically kill her sister Dot, who had overshadowed them both during the show’s very first matinee. Now Elsa is out for blood, and she’s apparently going to use Bette’s damaged ego to exact her revenge. But if one conjoined twin dies, can the other still live? It’s a concept Freak Show may put to the test fairly soon, especially if Bette uses the knife that Elsa slipped her during their little late night chat. Elsa assured Bette that she’s the real star of the show and Dot is simply trying to take it from her. “You mustn’t allow it,” she none-too subtly goads. (Hint, hint. Wink, wink.)

Because, you see, Elsa knows her audience. I mean, just look at how upset Bette got when her mother deprived her from seeing Singing in the Rain. Imagine what she’s capable of now that her vocally talented sister is hoarding the spotlight that she craves. Elsa knew all she’d have to do was plant the seed in Bette’s mind and the rest would take care of itself.

But what happens when the person you want to harm shares the same body as you? How exactly would that work? Well, for starters, let’s consider their unique body make up. As their doctor shared with us during the season premiere, Bette and Dot may share their nether regions, but they also have separate hearts and lungs, which implies that it could be quite possible for them to function individually. If one heart fails (or, you know, gets stabbed) it stands to reason that the other heart could potentially keep on beating. Bette would definitely feel some of that pain though. (Remember when she got stabbed by Dot after killing their mother?) Perhaps that was a foreshadowing of how things could play out if the roles were reversed.

Obviously, each situation is different depending upon how the twins are connected. But in Bette and Dot’s case it certainly seems possible one could still live, though Bette would need to be separated from Dot almost immediately. According to pediatric surgeon Dr. Eric Strauch in Esquire, it’s the only way to assure any chance of survival:

Once the dead twin’s heart stops, blood stops pumping, the vessels dilate, and the conjoined twin will essentially bleed into the dead twin. If that doesn't happen acutely — say it's a small connection — there will be an infection in a matter of hours. If surgeons are there when the [first twin] dies, then it's possible to do the surgery and save [the other]. I don't think anyone's ever done that — if they were separable before that, separation usually was attempted.

The problem with this outcome, however, is the fact that Bette and Dot don’t live in our modern, medically-advanced era, so it’s unclear if an attempted separation would be as successful as it might be today. The risks would be significantly higher. There have been several cases in the past where one twin’s death led to the other, such as with the Bunker twins, Chang and Eng. Though many believe Eng’s death could’ve been prevented had he been separated from his brother sooner. So if something were to happen to Dot, Bette would have to act fast and get to a hospital ASAP.

But again, this is a Ryan Murphy show, after all, so medical logistics won’t necessarily be brought into the equation. Who knows what kind of reason he could concoct to make something like this possible. However, a big part of me highly doubts this plan will ever actually be brought to fruition, at least by means of outright death. For starters, Bette and Dot sometimes seem to be able to read each other’s thoughts (unless the other one is half asleep, apparently), so if one of them has murder on the brain, chances are the other one will more than likely see it coming. So if Bette’s going to strike, it should be while her sister is asleep.

Of course, there’s always a chance that killing Dot wasn’t what Elsa had in mind at all. I mean, she didn’t work this hard to get conjoined twins into her show only to lose half of the act in a week’s time, right? Bette could use the knife to simply harm Dot enough so that she can no longer be the one performing. Maybe a quick stab to the vocal chords or something. That way Bette wouldn’t be putting her own life in jeopardy, but she’d still get all of the attention moved back onto her. Or at least that’s what she thinks.

Because, let’s be honest — the person who really wants the spotlight back on themselves is Elsa. She hated seeing Dot getting worshipped by adoring fans. She wants that fame, and I’ll bet she’ll do almost anything to get it, which, in a way, could end up making her the most dangerous monster of them all.