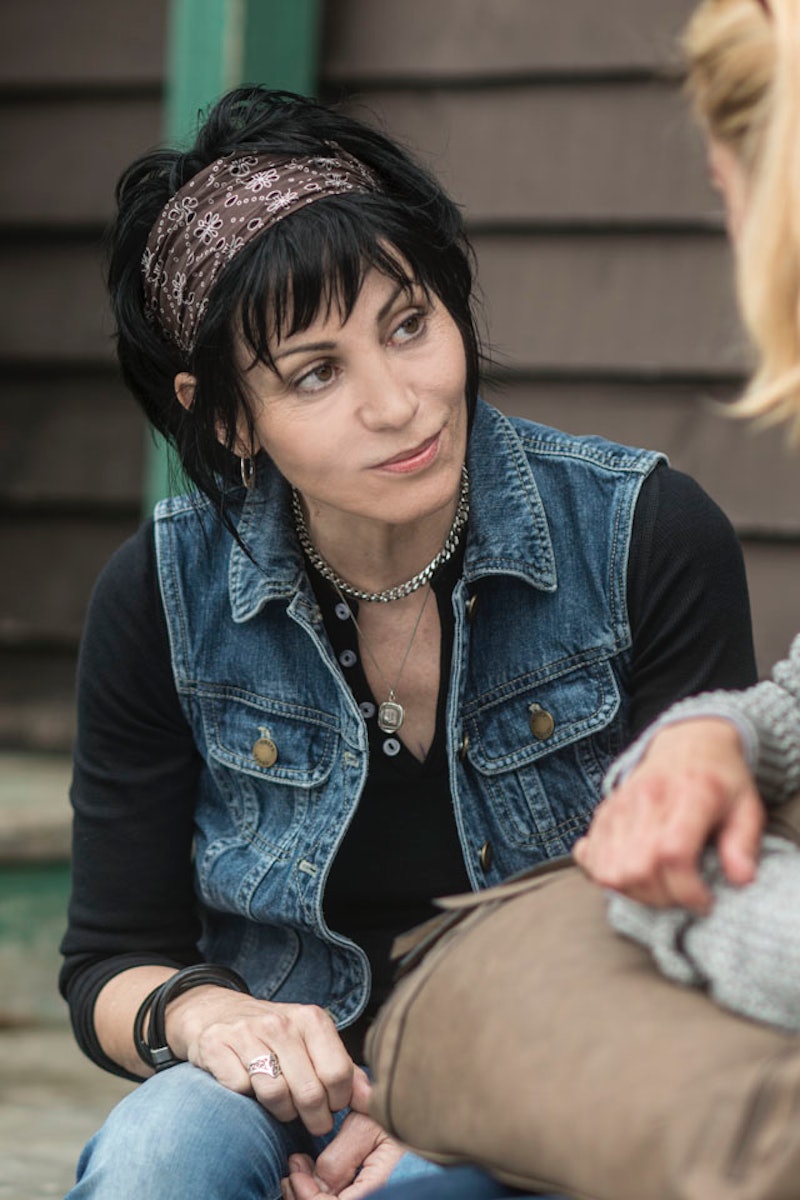 Queen of punk rock and original riot grrrl Joan Jett has, throughout her career, occasionally blessed us mere mortals with a film or television appearance, so that we could gaze upon her personage from the comforts of our couches. Yes, Joan Jett has acted before appearing in Big Driver , Lifetime's latest TV movie that premieres on Oct. 18. Though she's far better known as one of the most influential females in rock music (and also a Grammy and Rock and Roll Hall of Fame nominee, because that's how she rolls), the Runaways singer and guitarist has also performed in theater and on screen.

Of course, Jett's music has appeared in a huge variety of movies and TV. But the performer herself hasn't spent as much time in front of the camera. Maybe because she was too busy being a rock god or whatever. Her unnamed Big Driver character appears to play a small but important role in the Stephen King adaptation. From what I can tell based on previews, Jett plays a sympathetic bartender who helps Maria Bello's character cope with the aftermath of a brutal attack. Aside from Jett and Bello, this movie also features Ann Dowd and Olympia Dukakis. Though I could do with fewer media depictions of women as helpless victims of barbaric violence, or of mentally ill people as vicious killers, it is pretty cool that all four of these acclaimed females got together to kick some ass and make this movie. Check out the trailer for Big Driver below.

Jett is a big enough star that she only need to take on projects when she feels passionately about them. Her acting resume is about quality over quantity. Here are two of her best roles over the years.

The Rocky Horror Show on Broadway

One of Jett's best-remembered performances wasn't on screen at all. It was on Broadway, where she played Columbia in a 2000 revival of Rocky Horror. This show is both super campy and pretty punk rock, and the "Bad Reputation" singer took it to a new level by adding a guitar solo to the most famous song, "The Time Warp." Her character, Columbia, is as a faithful servant to Dr. Frank-n-Furter, who ends up paying for her loyalty with her life. Jett earned positive reviews, and the show received four Tony nominations.

As in several other movies and shows, in a Season 7 episode of Law & Order: Criminal Intent, Jett played a person quite similar to herself: a rock musician. Her character, Sylvia Rhodes, was not a successful star like the actress who played her, however. Sylvia was a washed up former groupie who hosted a cable access interview show called Rock 'N Talk. Shows in the Law & Order franchise frequently feature celebrity cameos like Jett for an episode or two, and you can always bet these famous faces either committed the crime, or were the victim. In this case, Sylvia is killed off just a few minutes into the episode, by being bludgeoned to death with a champagne bottle. Ouch. You can watch the entire goofy Rock 'N Talk episode online and check out Jett's latest acting venture when Big Driver premieres on Saturday night.