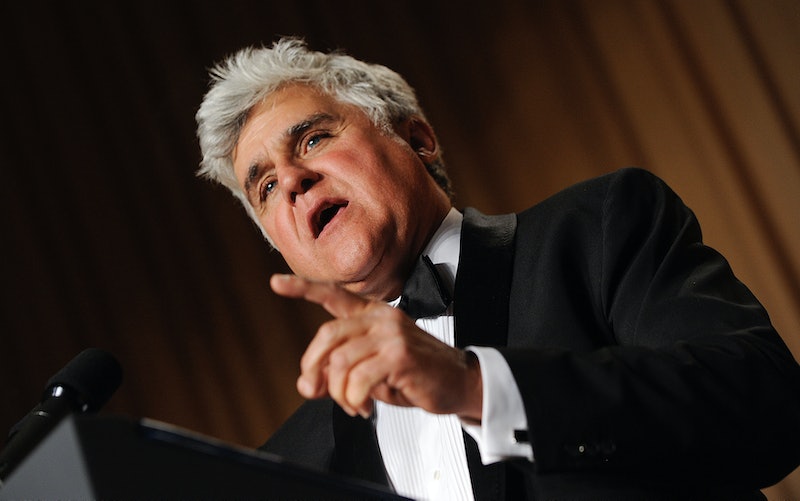 Retired-or-is-he late night talk show host Jay Leno opened up about the ban on Joan Rivers from The Tonight Show with Jay Leno in an interview with Access Hollywood on Wednesday, which the 64-year old TV personality began with a long "Ummmm" when asked the question about why the late comedienne was never on the show. Rivers was banned from the Tonight Show by original host Johnny Carson, and did not appear again until Jimmy Fallon became host in 2014. Leno's answer is, more of less, "out of respect, and later awkwardness," but the whole lame interview with Leno just proves that he didn't deserve to have Rivers on the show anyway.

Rivers was originally a mainstay of The Tonight Show, frequenting and co-hosting with her mentor Johnny Carson. When she left to begin hosting her own late-night on Fox, however, (which was later cancelled), Carson turned a cold shoulder on the young Rivers and banned her from ever appearing on the show again. When Leno was asked why he continued the ban on Rivers from The Tonight Show stage, he said "I didn't want to do it when Johnny was alive out of respect for Johnny... but it never even come up, nothing was ever said, we just didn't do it." What a response; honoring what you think a man's wishes are, vaguely. Apparently that sense of respect only extended to Carson, though, and not to Rivers, who Leno says only seconds later in the interview was a former friend of his (nor was respect an issue when he royally screwed his brief successor Conan).

So why did Rivers not get invited back, even after Johnny Carson passed away? "It got a little awkward," Leno said. "I said let's let the ground fallow for a while, let's see what happens." A quarter century, or the time that Rivers was banned from the show, is quite a long time to just let shit fallow, but who am I to mince words? The interview is just dispassionate and, to be colloquial, DGAF from Leno. At most, he looks like he was just woken up from a nap. But the fact that he never had Rivers on his show again is a big deal; it was upholding a fued that begun from a pretty sexist intention. As Rivers herself wrote of Carson in The Hollywood Reporter in 2012:

I kept saying, 'I don’t understand, why is he mad?' He was not angry at anybody else. I think he really felt because I was a woman that I just was his. That I wouldn’t leave him. I know this sounds very warped. But I don’t understand otherwise what was going on. For years, I thought that maybe he liked me better than the others. But I think it was a question of, “I found you, and you’re my property.” He didn’t like that as a woman, I went up against him.

Leno's continuation of such an arbitrary feud is just another example of the obstacles that women in comedy constantly face — Joan Rivers was subjected to a literal embargo on her person because once upon a time, she pissed a dude off. Thankfully, Jimmy Fallon knew much, much better when he took over The Tonight Show and invited Joan back, because let's be real: the late Joan Rivers has MUCH more claim to the Tonight Show legacy than Fallon does, and certainly way more than Leno. Leno says he had "no regrets," but he probably should regret being so petulant. Humility is important, and so is knowing how to respect those who came before you.