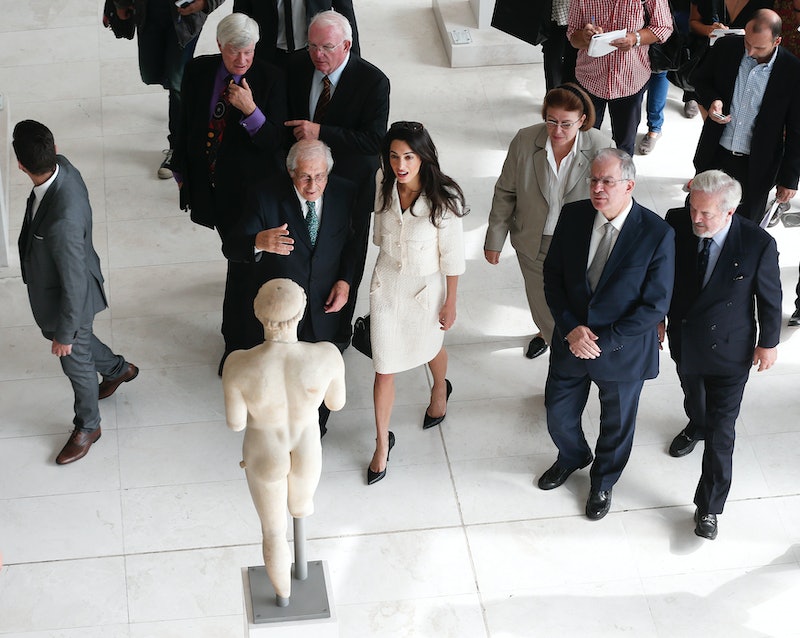 If Amal Alamuddin Clooney were an emoji, she'd be the painting nails emoii, without a doubt. In what seems like just split seconds after her sky high-profile wedding to George Clooney, the 36-year old lawyer is in Greece because her law firm has been hired by the nation to secure the return of the Parthenon Marbles to Greece. Also called the Elgin Marbles for the British man who stole 'em in the early 19th Century, Lord Elgin, the Parthenon Marbles are currently split between the British Museum in the UK and their rightful home in Greece. Clooney's involvement in the human rights case just puts the nail in the coffin for anyone who thinks that SHE'S the blessed one in the new union between the lawyer and the actor.

Clooney, in a beautiful white suit like a lovely IRL Olivia Pope, was treated like a boss in Greece; as the BBC says, she was "guided around the Acropolis Museum by its president Dimitris Pantermalis and Culture Minister Kostas Tassoulas, an honour usually reserved for foreign dignitaries." Well, she's pretty damn dignified; she said in an impassioned press conference regarding the marbles that returing the marbles to the Acropolis is a "just cause." Literally, Clooney was asked to step in to defend and reclaim cultural artifacts that were hella plundered by the British who operated for many centuries on the principle of Finders Keepers.

Clooney's cause here is a controversial one, but hopefully her newfound celebrity will bring more interest to the case; though the proper ownership of the Parthenon Marbles is pretty widely debated and known of, Clooney's involvement in the legal battle will bring more eyes to the verdict. And it's this kind of high-powered human interest work that Clooney does that really sticks it to those that are still calling her Mrs. George Clooney. Would you call Beyoncé Mrs. Jay Z unless she specifically told you too, e.g., the Mrs. Carter tour? Amal Alamuddin Clooney is a blessing which George Clooney should count every day, because he definitely dated up. She caught some flack for taking the name Clooney, an argument about feminism that was so boring it put me to to sleep—people are still mad about what name a woman CHOOSES to take?! But now that her law firm is actually being asked to shame the UK for colonialism, maybe her doubters will hush. [insert nail painting emoji here].