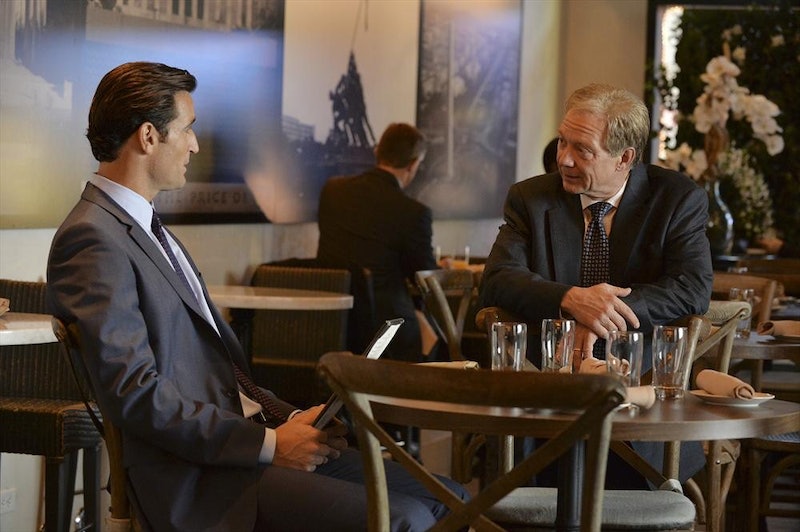 Something is rotten in D.C. and it's not just Mellie's two-day old T-shirts. Ever since the handsome stranger/prostitute/business student Michael sidled up to Cyrus at a bar and charmed the chief of staff up to a hotel room, I've had a bad feeling about him. Maybe I've just watched enough nighttime '90s soap operas (#RIPMelrosePlace) to know that a guy with slicked-back hair is never good news, but I can't shake the feeling that Michael and Cyrus on Scandal are about to be the next, well, scandal.

Let's look at some of the obvious clues: Michael is clearly in cahoots with Portia Di Rossi's head of RNC, who is so hardcore she has her illegitimate business meetings at her daughters' school drop-off. Scandal has made it clear, from the beginning, that Michael is doing Lizzie Bear's bidding (which is of course, trying to bring Cyrus down after he let Fitz go on a gun control crusade). Shonda Rhimes loves taking storylines ripped from the headlines, so it's definitely possible she's drawing inspiration from the Eliot Spitzer prostitution scandal (among others... many others) to create Cyrus' long-time-coming downfall. If she and Michael leak Cyrus' expensive lovemaking to the press, he'd be forced to resign, Fitz would pick a new, RNC-approved chief of staff, and all would be right in the GOP. Right? Well, maybe.

Let's humor the Pretty Woman theories swarming around Michael and Cyrus (Myrus?) for a second. There are moments where Cyrus really does look like he's in the throes of passion, or romance, or hell, just something. And after James' death, he clearly hasn't felt much in a long time (so much so that we have heard nothing about his suddenly absent daughter, but I digress).

Cyrus and Michael's make-outs are definitely steamy. That first time Michael had Cyrus up against the door, it was as if a stream of desire and relief were coming out with Cyrus' groans all at once. But it takes two to tango...

Look at this guy. He is oozing confidence. Does he seem anything like the kind of shy guy Cyrus first met at the bar? No way. This is a guy who knows he's got it in the pouch, er, bag. I mean bag. You only need to look at the very first episode of the season, when Cyrus decides to come back to the bar, to see it all play out on Michael's face: Hook. Line. Sinker. Besides, can you really trust a man who is constantly lounging without his shirt on?

Even the lyrics of the song that plays over that bar scene seem like a hint. As Cyrus and Michael passionately embrace, Donna Summer wails:

Someone left the cake out in the rain

I don't think that I can take it

'cause it took too long to bake it

And I'll never have that recipe again

Cyrus is totally the cake.

But am I crazy for wanting to give Cyrus just a little more credit? I know he's sad and depressed and misses James and the days when Fitz was only just sort-of the joke of the nation. But Cyrus is also cutthroat. More importantly, Shonda is cutthroat. When we get surprises, we get them as quick and fast as a Papa Pope knife to Jake Ballard's hand. The Cyrus-Michael plot seems way too drawn out to be as obvious as it seems. Or maybe I just don't want to believe that Cyrus doesn't somehow have a trick up his sleeve.

On second thought, maybe he does...