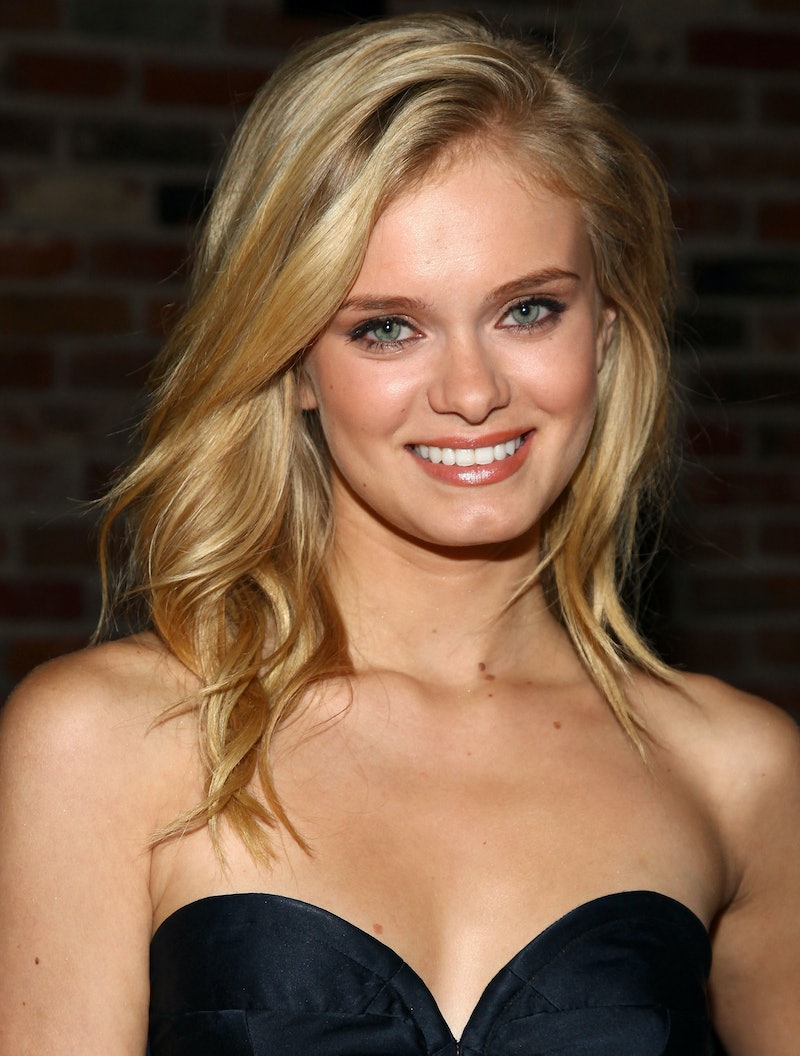 Like any of us had a doubt in our minds that How To Get Away With Murder would be nothing short of a home run success. The latest addition to the Shonda Rhimes trilogy doesn't quite pack the emotional factor of Grey's Anatomy — yet — but it sure follows in Scandal's insane plot twist footsteps. As the mystery continues to deepen, and I bet even more people get murdered, we're going to start seeing a great line up of weekly guest stars. Thursday's episode brings the addition of Sara Paxton as a guest star on Episode 4 of How To Get Away With Murder . She'll be playing an employee of another guest star, Elizabeth Perkins, who has the coveted title of Annalise's defendant du jour.

Paxton is yet another case of the week guest star on HTGAWM — but then again, she could defy that pattern and we'd buy whatever Shondaland is selling. All we know about Paxton's boss, played by Perkins, is that she's a "high profile client." Maybe they're all part of the much bigger Lila mystery, but probably not.

If Paxton looks a little familiar, it's because she is, and if you don't recognize her then your little sister probably does. She's had a string of both successful films and television shows dating back to 1997 where — prepare to be jealous — she played a party guest on You're Invited to Mary-Kate & Ashley's Christmas Party. Aside from hanging out with the Olsen twins, where else have you seen her before?

Paxton starred on the Discovery Kids show from 2004-2006, and the role earned her a Daytime Emmy nod. It was your typical fish-out-of-water situation: Darcy's mom decides to move her daughter away from Malibu and to a quieter part of the country, which happens to be in the "middle of nowhere." To keep herself busy, she takes a job at the local animal clinic and lots of animal related hijinks ensued.

For her first big outing on the big screen, Paxton played a mermaid, named Aquamarine, who happens to wash ashore during a storm. Breaking from what we know about most mermaid situations, Aquamarine is able to travel on land with legs during the day, as long as she doesn't get wet. The film also stars Emma Roberts and Joanna "JoJo" Levesque and was billed as a female BFF film, that surprisingly did moderately well at the box office.

Oh, The Beautiful Life. You might remember it as that "struggling model" show set in New York City that boasted Mischa Barton as the headliner. It also had a non-singing Corbin Bleu (what's the point of that?). Paxton played another beautiful model, who manages to steal the spotlight away from Barton. If you're really dying to see exactly what you missed with this show, since it was canceled after its second episode, all seven produced episodes are on YouTube.

I am, unfortunately, a sucker for anything shark related due to my love of Jaws. This movie is like Jaws, but with 15 times more blood. Also, it's not exactly like Jaws since it was made with buckets upon buckets of blood. It's very bloody. Also, you can watch it in 3D. I'm pretty sure I've convinced you to watch this movie now. Sara plays Sara, and spoiler, only she and her dog survive to the end.

Paxton is actually an accomplished singer and has lent her voice to many different productions, like the Darcy's Wild Life soundtrack, the Aquamarine soundtrack, and also the "Shark Bait Rap" for Shark Night. With Lovestruck: The Musical, she actually got to put her musical theater talents to good use on screen. In this ABC Family movie, she plays the daughter of Jane Seymore and is desperately trying to figure out her love life.

That probably isn't what she's doing on HTGAWM, but you never know.