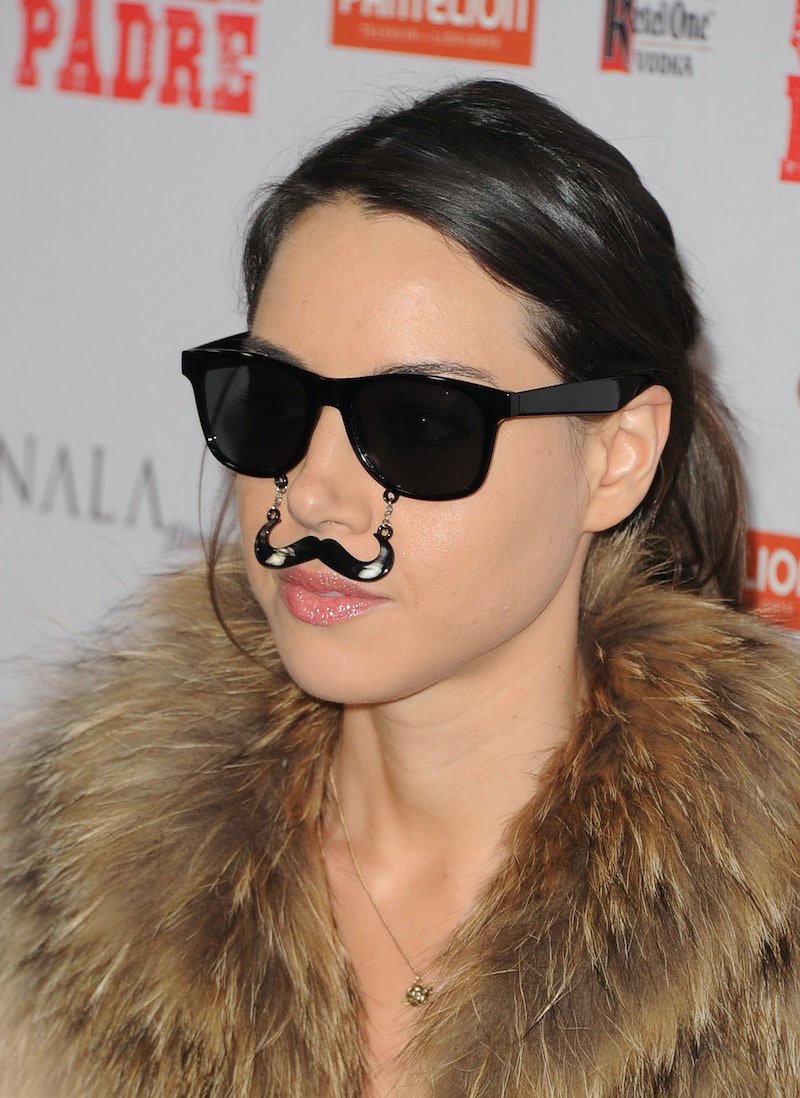 Over the course of six seasons, Shark Tank has introduced us to some pretty life-changing products. Remember the breathalyzer that plugs into your smartphone or those unattractive yet health-fortifying nose filters? Yeah, Sun-Staches will not have the same impact as those products.

Sun-Staches will be the latest novelty item to appear on Shark Tank during its Oct. 17 episode. Though you might not know the name of this company, you've probably seen these costume-y sunglasses and facial hair hybrids on celebrities, at parties, or during a shopping trip at Urban Outfitters. Sun-Staches are apparently "The Original Mustache Sunglasses," so imitations need not apply. You came to get the good stuff, after all.

The best-known Sun-Stache is the hipster staple of black Ray-Bans and a handlebar mustache combo, but Sun-Staches also come in a wide variety of styles for seemingly every occasion. You can put on some shades and instantly transform yourself into a Teenage Mutant Ninja Turtle, Uncle Sam, or a football player.

I'm sure the creators of Sun-Stache will give each Shark a predictable custom pair, and if that flattery isn't enough, maybe these little tidbits about Sun-Staches will convince them to invest in these wacky sunglasses.

You can get them pretty much anywhere

Like what you've seen so far? Well, it's pretty easy to snag a pair of these sunglasses. Several styles are currently for sale on the official Sun-Staches website at $12.99 each or the Shark Tank Deal of three for $29.97 plus free shipping. You can also get Sun-Staches through Amazon and Party City, as well as in brick and mortar stores, such as Halloween costume shops. And with Halloween coming up, it's so eerie how Sun-Staches appeared on the Oct. 17 episode of Shark Tank, don't you think?

The inspiration for Sun-Staches is unclear

Although Sun-Staches seem like a pretty straightfoward product, their true genesis is actually a bit of a mystery. David Levich, one of the creators of Sun-Staches, told The Atlantic that the idea for the sunglasses came after a brainstorming session about trends when a pitch meeting for Spirit Halloween stores was coming up. Jordan Szymanowski, who was also behind creating the brand, told The Atlantic it was more of "an epiphany," where he came home from the grocery store and realized they should combine Ray-Bans and mustaches since hipsters love both of those things.

The "About" page on Sun-Staches' official website tells yet another story. Apparently, the creators were inspired by a college friend's plight of not being able to grow a mustache, and they searched for alternatives. When they held up their wonky video game controllers under their noses while playing one day, the idea for the Sun-Stache was born. We'll have to wait and see if the sharks can wrestle the real story out of them.

Ah, 2012. What a strange year it was. That was the year Carly Rae Jepsen's "Call Me Maybe" wormed its way into our ears and eventually into our hearts. That was also the year everyone made their own videos lip-syncing to the hit song. A whole gang of teeny boppers decided to appease all the tweens out there in one fell swoop by creating a video featuring Justin Bieber, Selena Gomez, Ashley Tisdale, and other teen stars singing along to "Call Me Maybe." And they wore Sun-Staches while doing it. This was like the best advertising Sun-Staches didn't buy, and it blew the brand up, making everyone from teens to festival-goers to more celebrities want to wear these novelty shades.

They have a lot of famous fans

Speaking of celebrities, pretty much every famous face from the early 2010s has been photographed in Sun-Staches. And Sun-Staches wants you to know about it. One Direction? Check. Kendall Jenner? Got her. Miley Cyrus? Do you even have to ask? Maybe their pitch should be: if celebrities wear it, it can't be stupid.