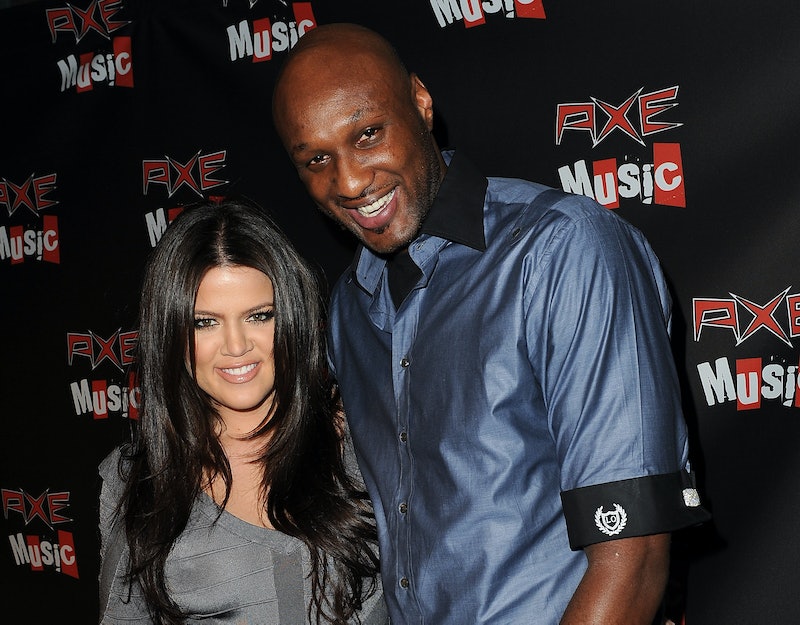 The Kardashian Krisis featuring Lamar Odom took a pretty shocking turn in L.A. this morning. According to the New York Post, Odom was arrested for a DUI this morning.

Odom refused chemical tests when he was brought back to the police station, so it's not clear if he was on any drugs, but according to reports, cops stopped him for driving too slowly and in a "serpentine" manner, which is a strange way to describe someone's DUI driving, but OK. I assume it means he was slowly veering between lanes, and "serpentine manner" is just a pretty way of saying it.

Anyway — Odom reportedly ignored the cops for about three exits on the 101 freeway before finally stopping. He failed three, count 'em, three, sobriety tests, and was promptly carted off to the police station. He's now being held there on $15,000 bail.

If you've not been following the Kardashian Krisis featuring Lamar Odom in the recent weeks, know this: It's been a tough summer for Lam Lam. Recent reports (mostly from TMZ) have stated that Odom is suffering from a serious addiction to crack cocaine, though other stories have specified it's actually OxyContin.

Reports have also been released about Odom's wife, Khloe Kardashian, kicking him out of the house, and Kardashian matron Kris Jenner visiting divorce lawyers on Khloe's behalf. For what it's worth, E! Online reports that an insider denies all the claims — "Lamar was never missing...he has been with Khloé. They have never spoken to a divorce attorney," — but this DUI doesn't exactly bode well for that story.

More like this
Kim Kardashian & Tristan Thompson Had An "Inspiring" Thanksgiving Celebration
By Brad Witter
Kim K Is Putting Kanye’s Memorabilia — Like Grammys & Clothes — In A Vault
By Jake Viswanath
In Their Divorce Settlement, Here's What Kanye Reportedly Must Pay Kim K & Kids
By Radhika Menon
Kim Kardashian Didn’t Give Pete Davidson Her Number At First For This Reason
By Jake Viswanath
Get Even More From Bustle — Sign Up For The Newsletter