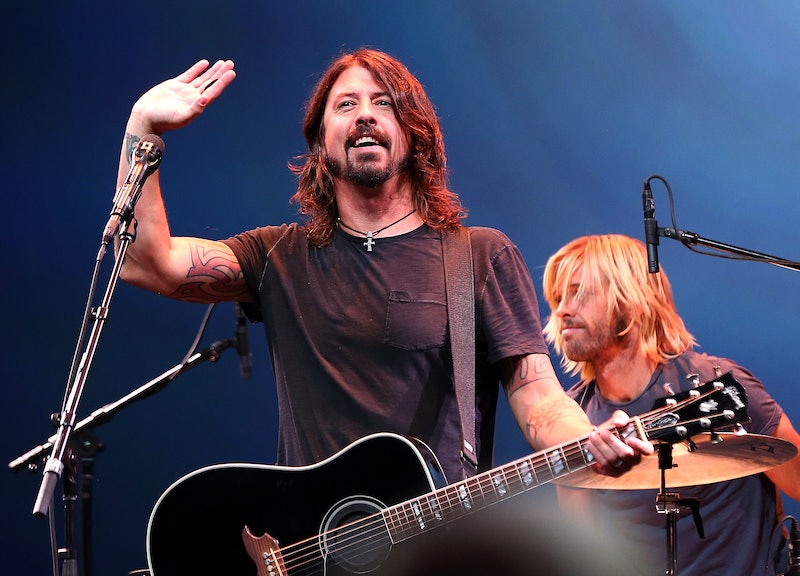 Believe it or not, Dave Grohl's band Foo Fighters has been together for 20 years. The former Nirvana drummer founded the one-man show in 1994 after Kurt Cobain's death and has kept it going — and going — ever since. Guitarists, bassists, and vocalists have come and gone and come back again, but the Foo Fighters keep rocking on with new albums since their self-titled debut was released in 1995. Grohl and his Grammy-winning band are celebrating their 20th anniversary with their eighth studio album due in a few weeks — the Foo Fighters' Sonic Highways is coming out Nov. 10. The first single from the album "Something From Nothing," was released on Oct. 16, one day before the docuseries Foo Fighters Sonic Highways ' HBO debut.

The eight-episode miniseries follows Grohl and the band as they embark on an odyssey of eight different cities (Chicago, Austin, Nashville, Los Angeles, Seattle, New Orleans, Washington, D.C., and New York) to record each song of the record. "I realized that the pairing of music and documentary works well because the stories give substance and depth to the song, which makes for a stronger emotional connection," Grohl told The Hollywood Reporter about the Sonic Highways miniseries. "So I thought, ‘I want to do this again, but instead of just walking into a studio and telling its story, I want to travel across America and tell its story.'"

The band has also performed every night this week as the musical guest on CBS' Late Show With David Letterman, but I'm disappointed to say they've only sung covers so far, with other musical guests. Great ones, but those songs aren't the Foo Fighters classics we grew up listening to. In honor of Sonic Highways (both the miniseries and the album), here are the essential Foo Fighters songs you must treat your ears to while you wait for their next great album to come out.

This single from their 1997 album The Colour and The Shape is definitely one of Foo's signature songs and one of their biggest mainstream hits. After a divorce from photographer Jennifer Youngblood, Grohl penned "Everlong" when he began falling for a new love. "That song's about a girl that I'd fallen in love with and it was basically about being connected to someone so much, that not only do you love them physically and spiritually, but when you sing along with them you harmonize perfectly," Grohl told U.K. rock mag Kerrang! about the rock ballad.

You may also recognize the tune from Monica and Chandler's wedding on Friends, last year's The Wolf of Wall Street, and the Adam Sandler movie Little Nicky.

Many Foo fans believed that this epic track, also from The Colour and The Shape, was about and dedicated to Grohl's friend and former bandmate Kurt Cobain. If it is, Grohl's never specifically said it. He has, though, publicly objected to John McCain's use of the tune at the politician's campaign rallies in 2008. "The saddest thing about this is that 'My Hero' was written as a celebration of the common man and his extraordinary potential," Grohl said in a statement about the song's misuse. "To have it appropriated without our knowledge and used in a manner that perverts the original sentiment of the lyric just tarnishes the song."

A few years — and albums — later, Foo Fighters won a Grammy for Best Hard Rock Performance for this catchy Billboard charts hit. The song represented the band's new edgier direction. "It’s a little darker, more romantic, creepier than anything we have done," Grohl told MTV about "All My Life." "And this song just caught everyone. I said, ‘Really? That doesn’t sound like it’s going to sell any records.’ But sh*t, man, I dig it, so we’re good to go.”

And with Sonic Highways coming out in a few weeks, I hope to be adding some new legendary Foo songs to this list.