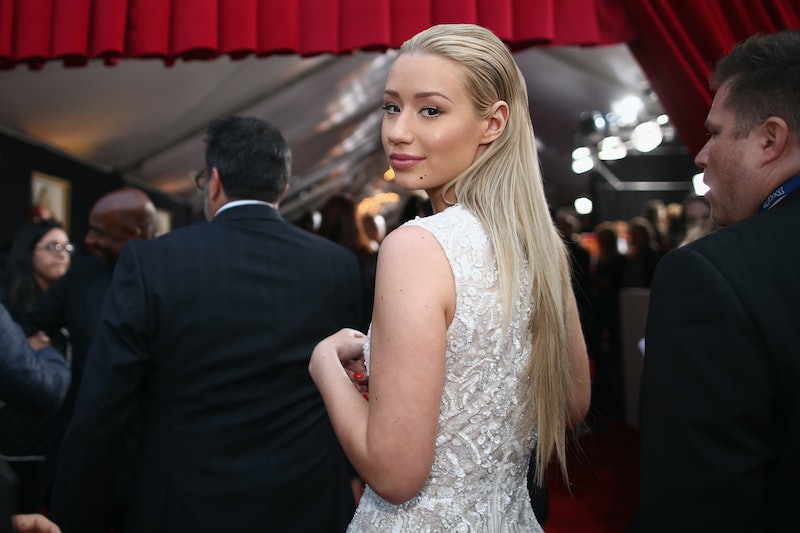 Thank goodness the Snoop Dogg and Iggy Azalea feud is over...for now. The incredibly random and incredibly pointless beef between the two performers was launched by an Instagram meme about Azalea that Snoop Dogg posted and was fought on two social media fronts: Instagram and Twitter. Now it's finally over, but the way that it ended has left a bad taste in my mouth. Snoop Dogg apologized to Azalea on Wednesday, but it wasn't because he realized the error of his ways. It wasn't even because he had read his own posts and watched his own videos over again and realized he'd gone too far. No, Snoop Dogg apologized because rapper T.I. made him. Wait, what?

His apology was done through an Instagram video, which at least gave it a personal touch. In the video, the performer has a small smile on his face as he says, "I just got off the phone with my home boy [T.I.], the King of Atlanta, and it's officially over. No more bad talk. I apologize. I apologize. I'm sorry. I won't do it again." It's accompanied by the caption "it's over I'm [back] on my cool shit no harm no foul. [T.I.], respect sorry bout that." Azalea responded with a tweet saying that she appreciated his apology and that was the end of that.

Since the two entertainers have thankfully buried the hatchet, let me be the one to pause this here and go excuse me? Snoop Dogg is apologizing for disrespecting T.I.? What happened to Azalea's respect? What happened to the respect he owes her as a woman, as a fellow human being, as a fellow performer? Where was his "respect" and his "sorry" when he was calling her all kinds of derogatory terms, from b**** to c*** even as she was justifiably asking him why he was suddenly being so rude to her when he had always been nice to her face in the past? Why is it that Snoop Dogg is saying "respect, sorry [about] that" to T.I. and not to Azalea?

I might be being too harsh here. An apology is an apology and I'm happy that Azalea accepted it since it means an end to the feud. However, I think it's very, very good that she didn't say explicitly that she accepted the apology. Instead, she said that she appreciated it, which is truly a better choice of words. This is not an acceptable apology. This is Snoop Dogg apologizing to T.I. for making him angry with his remarks about Azalea, not Snoop Dogg apologizing to Azalea because he realized he was being really disrespectful to her. This is not Snoop Dogg giving Azalea the respect she deserves; this is Snoop Dogg giving T.I. the respect that Azalea was owed.